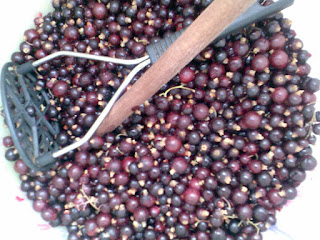 Buying a house is an expensive way to acquire soft fruit. On that first, tense weekend when we owned 20 Bentcliffe Drive one of the few pleasures was discovering blackcurrant bushes laden with fruit. There are raspberries and strawberries too, but not in such quantity. Anyone who visited (mostly parents) was put to work and our freezer began to fill with bags of currants.

Of course, we also have blackcurrant bushes at Carr Manor Mount and these ripened whilst we were away at Rydal playing symphonies and having all sorts of fun. Claire and her parents harvested these during the course of last week whilst I was in Wales. When I came home the freezer was so full of blackcurrants that we had to use a buttress to keep the door closed. (I exaggerate. A little.)


On Monday 10th August I weighed the blackcurrants. Twelve pounds. That is enough for a quadruple batch, so this is what I have done. I mistook a small bag of sloes for blackcurrants and only realised my mistake when they were in the bucket. I rescued as many as I could, but there are still some in the mix.


On Tuesday, once the fruit had defrosted and I was back from helping Rory move flats again, I mashed it with a potato masher. This was hard work, took a while and I am surprised that my hands are blister-free. I dissolved 11 lbs sugar in 22 pints of water (in three batches), boiled this and poured it over the mashed fruit. The bucket is close to full and when putting in the yeast on Wednesday evening, 12 August, I noticed the packet warned of "High Foam". Fingers crossed. I also added 2 teaspoons of pectolase and about three of nutrient.

Though I added the yeast on Wednesday, there was no hint of fermentation until Friday afternoon, and I was beginning to think that this would be my worst wine-making disaster yet. However, everything is fine and I put it all into its demijohns on Sunday 16 August. None of the demijohns are full and the recipe (if not the bucket) would have benefitted from another 2 pints of water.

If you want to see how this wine turned out, click here
Posted by Ben Hardy at 18:48