When we moved house four years ago, we brought three gooseberry bushes with us. From these, we cut twigs and plonked them into the clay-based soil in our new garden, expecting them to remain twigs (only browner). Instead, they flourished and where we had three gooseberry plants, we now have many. Some are doing better than other, and their fruit ripens at different times - but for the first time, we had sufficient gooseberries for me to make gooseberry wine. 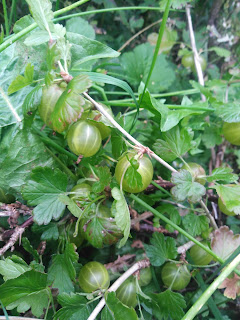 Picking the fruit is not without its hazards - gooseberry bushes have vicious thorns and after each harvesting session my arms looked as if they had gone several rounds with a pissed-off cat. There would be frequent cries of "Ow" as I spiked my hand again.

The berries were of various quality. One bush - the one that produces the earliest, smoothest gooseberries - had abundant, clean fruit requiring little washing. Another had the odd scab and a third produced fruit that was entirely covered in brown patches. I made sure that I washed the fruit as best I could before freezing it. 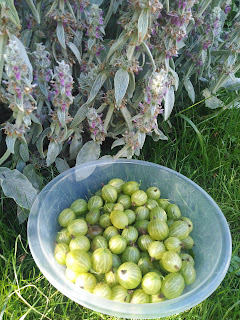 When it came to making the wine on Monday evening, 15th July, I measured out 6 lbs of gooseberries - most of which had been frozen - and mashed them in my bucket. That that had come from the freezer mashed easily and those that had not mashed not at all. I cut as many of those that I could catch into half and mashed them again. 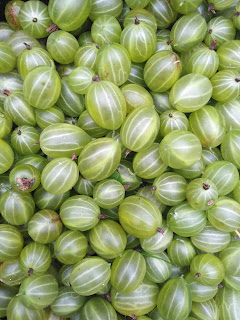 My last gooseberry wine was a little dry, so I added an extra 2 oz sugar this time: 2 lbs 14 oz: and I poured over five-and-a-half pints of boiling water. Next time I should use only 5 pints.

On Tuesday morning I added a teaspoon each of yeast, nutrient, pectolase and tannin. On Saturday evening, 20th July, after an afternoon chamber-music party in Wetherby, I put the wine into its demijohn. This was a relatively quick process and the resulting wine is an opaque greyish-green. It will clear (he said, confidently) to a sparkling yellow. 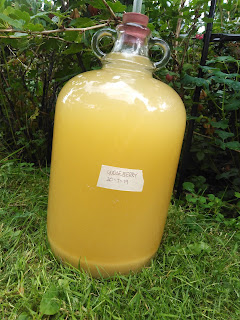 If you want to see how this wine turned out, click here.
Posted by Ben Hardy at 18:03 2 comments:

Hello Anyone who keeps up with my blog (I know there are a few - I have looked up Wasilla, Alaska on the map and explored it via Google StreetView.) You will have noticed that I have been dilatory of late in keeping up with this blog. I don't know if this is a permanent state of affairs, or a temporary blip. But I have started seeing this as a chore. I may take a break for a while, or I may wake up on Friday with renewed vigour. Bear with me for the moment - I hope that normal service will be resumed.

In the meantime, here is a picture of the house I grew up in. 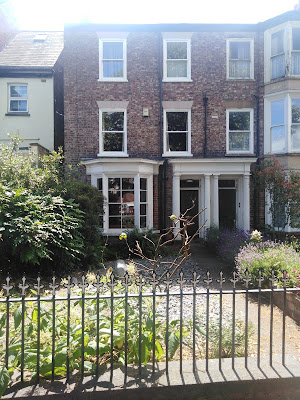 I am so pleased with this Xmas Tutti Fruti. It has a dark sweetness to it that really works.

The bottle was opened on a Wednesday and finished on a Friday - which was an exhausting day at work. It being half-year end, I had 13 house completions to do, and the last three did not happen until 15 minutes before close of business. My stress levels increased through the day and were only gradually deflated through the administration of wine and pizza during the evening.

Claire has something odd going on with her nose. She has become hyper-sensitive to perfume, to the extent that she can taste it when people are in the same room wearing scent. Her current medication advises her not to drink much. Therefore I had this bottle to myself - chosen because Claire is not rose petal's greatest fan. In fact, this wine has aged splendidly.

Claire asked for a nice bottle of wine for Sunday evening and I thought that Apple & Strawberry would fill that requirement. I was mistaken. The wine was thin and had the taste of a home-made wine left too long in its bottle. This is not a wine to age lovingly in the cellar. Drinkable but disappointing.

We had spent the day nosing round gardens in Chapel Allerton - many of which we had seen two years ago at the last Open Gardens for St Gemma's Hospice event. The evening (apart from drinking unexceptional wine) was spent in the company of  Line of Duty - we have now finished our binge watch of all five series. This took some doing but it has been excellent.

We needed a mid-week bottle for Thursday night and Inca Berry & Raisin had studied that particular job description and submitted its application. Neither Claire nor I could really remember what it tasted like - and the answer is 'raisiny'. Not a bad wine by any means, but not one for Sunday Best.

We drank most of the bottle whilst watching the penultimate episode of Line of Duty, leaving a glass for Claire to have whilst I was off playing Sibelius 2 at Leeds College of Music. I don't think I have been in a concert before where the music comes to a shuddering halt and we have to start again. My lucky musical socks were obviously not working.

Claire announced a few days ago that we had not had a soufflé for years. Therefore on Sunday night we had a cheese and smoked mackerel version, and it was delicious. Something citrussy was required - hence a bottle of orange wine.

Earlier in the day the Leeds Triathlon went past the top of the street - it was all over quickly as several fit men zoomed past on bicycles. It is not a sport that particularly grabs me (very few do) but it happening 50 yards from where I live means the effort involved in spectating is minimal. As is the investment of time. Which means more time for drinking orange wine.