Despite having a temperature of 100.2o (or 38o in old money if you prefer) I can still drink half a bottle of wine. This is purely an experiment to lower my body heat, you understand, and nothing at all with it being a Saturday night. In fact, the combination of ill-woozy and alcohol-woozy is an interesting one, and probably not to be recommended. I have been feeling sorry for myself since Wednesday, and steadfastly in my pajamas since Thursday night. Our supplies of paper hankies are diminishing. Never mind.

This wine was far better than I remember previous bottles of Hawthorn wine. Possibly it is the maturation. Or it could be that illness does odd things to my taste buds.
Posted by Ben Hardy at 21:34 6 comments:

This wine is so good that it needs to be saved for special occasions. Tonight was one such. I played in a 'Classical Spectacular' (rubbish title!) concert in Saltaire, with the Airedale Symphony Orchestra - lots of familiar and entertaining pieces to pull the crowds in. We played the 1812, Night on a Bare Mountain, Dance of the Hours - that sort of thing. The tactic worked; the house was full and it was standing room only. Best of all, Quin came. He has not seen me play bassoon before and the orchestra played well.

Back at our house we ate venison sausage casserole and a steamed ginger pudding, drinking Christmas Tutti Fruti from the wine glasses shipped over from Nebraska by my grandmother, Quin's mother, as a wedding present. It has been a wonderful day.
Posted by Ben Hardy at 19:35 No comments:

Claire has spent the day pacing - certainly metaphorically and sometimes literally too. She had a Music Club performance tonight; four pieces for viola and piano; and was frequently heard asking what she had let herself in for. In fact (and of course) she played brilliantly - I was congratulated on her playing by a double-bassist. But he redeemed himself by congratulating Claire too. My contribution was my lucky musical socks. I didn't wear them, but Claire noticed this and put them in her case as a precaution.

When we got home we polished off this bottle in less time than was seemly. The wine was suitably fizzy for a celebration bottle, and its middle taste was clearly one of apple.
Posted by Ben Hardy at 13:53 No comments:

It has been a sober week, mostly on account of being out most nights playing music. This included tonight: Madeleine, David and I are playing a Beethoven trio for Music Club in a fortnight and Friday nights ar everybody's least inconvenient rehearsal slot. The trio is only going moderately well: we are less familiar with the piece than we were with the other trios played, and so a fair few more play-throughs are required. We only have two left. Which is worrying.

I had a small glass from this bottle before playing, just to keep Claire company you understand. Not because I fancied a glass or anything, oh no. Julia popped round to collect some music and a couple of jigsaws so she also had a glass. This meant that when I returned there was only one glass left. Two glasses of wine on a Friday night? That is my definition of abstemiousness.
Posted by Ben Hardy at 13:42 No comments:

We went to Lambert's for a meal last night and took this bottle with us. Usually when I take my wine for a dinner party I expect to see it drunk then and there with guests and hosts making statements about what a taste sensation it has been. This bottle, however, sat in Lambert's kitchen remaining resolutely unopened. In its place, though, we had a fabulous Italian red and a shot each of Greek vodka, so I can't complain.

Lambert had mad a huge (and successful) effort with his cooking. We had a large starter of lentils, parsnips and cream cheese, which on paper sounds odd but was not, followed by hare and sprouts. I have never eaten hare before and enjoyed it. Unsurprisingly it is rather similar to rabbit. The sprouts could have been a disaster - Claire's least favourite foodstuff, even worse than marzipan. But having tried one out of politeness, she ate four more and said she liked them. Blimey.
Posted by Ben Hardy at 21:55 1 comment:

It is with great surprise and pleasure that I can announce that this bottle was Quite Nice. Not the delicious redcurrant of 2009, you understand, but far better than any yet of this vintage. I cannot explain why.

We drank it on an unexciting Friday night where the menu was 'The Sick and the Weak' in a mustard white sauce topped by Thursday's excess mashed potato and cheese, and the activivity was 'General Sitting Around'. I am reading the second volume of Stephen Fry's autobiography; The Fry Chronicles; which s engrossing and gossipy, so much of the wine was drunk to that. Few could acuse me of having a rock and roll lifestyle.
Posted by Ben Hardy at 17:33 2 comments:

Blackcurrant wine, or at least this bottle, is far nicer that the half bottle of Retsina I discovered in my parents' fridge. Claire thought the Retsina sufficiently unpalatable that she did not drink more than half a glass before asking for the wine I had made.

We are in York, visiting Quin, who has just arrived from Nebraska and is here for ten weeks. It was a wonderful evening; I have not seen Quin since 2006 and he is in unpredicted great shape. He told story after story about my great uncles and aunts and their children. Names that I half remember of people I mostly have not met. And he talks in the same style as Mom - getting sidetracked frequently and going down alleyways in multiple sets of parenthesies, but always coming back to the original story. Fabulous. Of course, he had no wine.
Posted by Ben Hardy at 18:17 No comments:

I don't think I have ever finished a double batch of gooseberry by the start of January before. I blame Claire, who is a bad influence. And now we must wait until June for the next bottle. Oh woe.

It was a mistake to drink this whole bottle on a Thursday  - some of us have work tomorrow. But I am three days into the new job, and so far, so good. I am going to have to define my own role, which means there are all sorts of possibilities. This week has been all about finding my feet: so, getting to grips with the computer, the photocopier, the kettle. I like my new colleagues very much, though I am only one of seven. This is the smallest group I have worked with since my time operating an envelope stuffing machine in Arizona in 1989.

Anyway, this bottle of gooseberry was much better than the last and reminds me why I make it every year.
Posted by Ben Hardy at 19:27 No comments:

2012 has begun with dull, dank weather. I don't think it has stopped raining and it now being four o'clock, the chances of it getting light have gone. Let us hope that this is not an indication of the coming year.

I have spent much of the day stretched out on the chaiselongue reading Tess of the D'Urbervilles in preparation for Friday's Book Group. It is a novel I know well, it having been one of my A Level texts, though I have not read it for twenty years. What strikes me now, which did not then, is how little Tess does for herself. She is done to, or is driven by the actions or suggestions of others. And perhaps this is the point. Afterall, the gods end their sport with Tess in the closing lines, suggesting she has no control. But this has nothing to do with Prune & Parsnip Wine, which I started today - 1st January.

I have chopped up four pounds of prunes into small pieces and these are currently boiling in six pints of water. The bucket contains six pounds of sugar and a pound of chopped prunes. Once the parsnips are soft (after at least 20 minutes simmering) I shall pour the liquid into the bucket, and then boil another seven pints of water to add.

Claire has just come to tell me "Your wine smells of everything that is evil about parsnips". 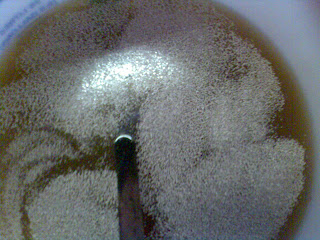 I put in the yeast and one teaspoon each of nutrient, pectolase and amylase on Monday morning. The wine currently smells dreadful, and I don't remember this from previous years. Uh oh. 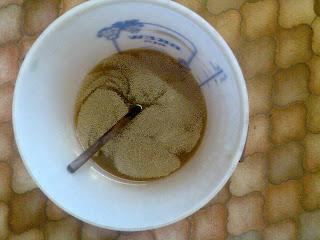 This smell lessened over the next few days, but there is a cloying hint of nastiness. Fingers crossed. I put it all into its demijohns a couple of days earlier than I might usually - on 5th January - but it was at the most convenient point of my timetable. Neither demijohn is full: there is at least a pint's space in each. But as the wine is fermenting aggressively, this is (with luck) sufficient space to keep the liquid in the demijohns. 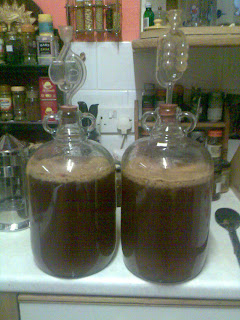 I added a pint and a half of tap water to Demijohn A and a pint to Demijohn B on 7th January.
Posted by Ben Hardy at 22:24 3 comments:

For the first time since making this wine, grapefruit does not entirely dominate its flavour. I could cut down on it further, but in this batch the limes are just as prominent. It is a wine that I enjoy - intense, tangy - but one that I can understand other people not liking. It went nicely with our New Year's Eve meal of cream of lemon soup and fish pie.

New Year's Eve was the quietest that I have had for two decades. We cancelled David and Amie visiting from Chester because of Claire's heavy cold and did not even manage to finish this bottle - though two large glasses of elderflower wine during its bottling process may explain that. Still, we left a couple of glasses each tonight, whilst I try not to worry about tomorrow's new job.
Posted by Ben Hardy at 20:57 No comments:

We have just returned from Julia's Feast. It was nearly a year ago that we gathered for a similar occasion to hear Nigel Pargeter plummet from Lower Loxley's roof. This time there was no radio soap opera to interupt the festivities, so we had to make do with eating and drinking far too much. The food and company were both splendid - there were ten of us round the table, which was stuffed with salmon and gammon and smoked mackerel and pate and pineapple and exciting cheeses. This wine was a more than adequate accompaniment. It is as fruity as its name suggests and has a fizz. I think everyone liked it.
Posted by Ben Hardy at 10:53 No comments: