We are creatures of habit. Wednesday night we watch Spiral and Thursday night is now Derry Girls and Staged. Our television plans are written on a list at the weekend, along with what we will eat that night and who is to be chef. 'Spontaneity' is not a word I know. I don't, however, plan which bottle to open and base that on a combination of what we are eating and what we both fancy. On Wednesday night that just happened to be Xmas Tutti Fruti. This wine is excellent, one of the best vintages I have made, and merits more than a mid-week status.

Mostly this bottle came after a drink in someone else's garden. The most recent easing of Lockdown allows groups of six people to mix outside and we have taken full advantage. On Friday we were drinking cider in Mark's garden - some of the apples came from our tree and the fizzy stuff was excellent. Then on Saturday we drank top quality champagne with David & Liz to celebrate David's birthday. The apple wine was a bit of a come down after that. Alright and little more.

Somehow Thursday nights have become a Full Bottle Night and that is not necessarily a Good Thing. When Lockdown eventually ends my liver is likely to breathe a sigh of relief.

The wine was chosen to go with Kittery Baked Fish and accompanied it nicely. Sharp citrus flavours go well with cod. Earlier in the day I watched a tree surgeon swing from ropes, taking branches off the hated Sycamore. Before he left I asked him to take another limb off our awful Goat Willow. I do actually like trees - quite a lot - but it helps if they bear fruit.

Sunday was a day of many pleasures. The best of these was spending time in the garden of 60 Heworth Green, huddled around an outdoor stove chatting with Chris, Kate and my parents. It has been months since I have seen any of them and though we were there for only 90 minutes, it was glorious. We were snowed upon but that just made it all the more memorable.

In the evening we had another virtual dinner party with Rachel & Duncan, where this was our second bottle opened, after a bottle of Prosecco to celebrate Cornelia Gruntfuttock's birthday. The wine is excellent and I will save a bottle for Rachel & Duncan to taste when we eventually see them in person.

Claire required something nice to drink after I had forced her to have two sips of Magnolia Petal Wine. Being the loving and considerate husband that I am, I directed her to the blackcurrant wine and whilst Claire was drinking this, I was drinking the Magnolia Petal. There was half a glass of this for me on Saturday night, and it is a pleasant vintage of blackcurrant - much like every other blackcurrant made (a remarkably consistent wine ingredient). I drank my ration whilst watching The Core with the Snarkalong Film Club - a truly silly disaster movie with the concept that the Earth's core has stopped turning and only a nuclear bomb will get it going again. Hilarious and predictable. 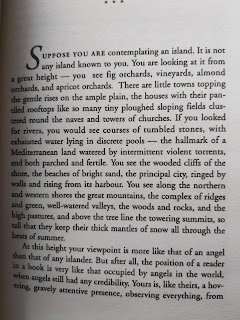 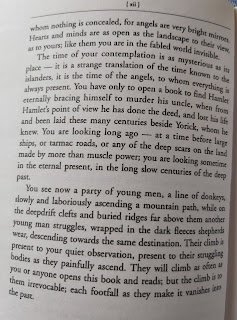 I started reading 'Knowledge of Angels' by Jill Paton Walsh - and the pages above are its opening. I think they are stunning, and I thoroughly recommend this book.

Distinctly odd but (depending on who you ask) not unpleasant. If the person you ask, however, is my wife, she will tell you just quite how unpleasant it is. Claire took one sip, after a suspicious sniff, and pulled an almighty face as if I had made her drink hemlock. I asked her to repeat the process for the camera. Showing how much she loves me, she did. Thereafter the remainder of the bottle was mine.

The wine does have a strange taste - there is a bitterness that lurks below the surface and there is a hint of tea to the flavour. It is not as good as 2019's batch but I honestly don't think the wine is a disaster. Adding a dash of sugar-syrup helps. Claire has requested that I never make this again, which is a little harsh. This year's harvest has been destroyed by a late April frost and snow showers, so she is certainly safe for the time being.

I last made Spiced Beetroot Wine ten years ago. 2011 seems like a foreign country: they did things differently there. It is worth revisiting this flavour from time to time, not least because of its alarming colour. Also, on the whole my reds are better than my whites - and whilst this is not a traditional red (what with it being made from beetroot) it has the appeal of the unusual.

I came home from Chapel Allerton on Saturday noon with not quite enough beetroot. Claire wanted two for her 'Beetroot, Goat's Cheese and Caraway' Bread, leaving me with 2½ lbs rather than the 3 lbs set out in my recipe. However, the bread was superb and I was deviating from my recipe in other ways, so this was no sacrifice at all.

I began my wine-making on Easter Sunday, 4th April. Often at Easter we are in Newcastle or hosting Claire's siblings here but those options were impossible for obvious reasons. Instead I spent most the day in the kitchen baking (peanut butter cookies and lemon meringue pie, thank you for asking) and making wine to Classic FM's Top 300 Countdown. I chopped the beetroot into small-ish chunks and put these in my biggest pan with 6 pints of water. This was brought up to the boil and left simmering for 35 minutes.

Meanwhile, I sliced 2 oz of ginger thinly and put this, the juice of one lemon, 2 lbs 12 oz sugar, 8 oz minced sultanas and 2 pints of cold water into my bucket. Adding sultanas is new - and has been done to give the wine additional body. I put in six or seven shards of clove - some bits looked like really tny cloves - and this is certainly less clove than I have used on past occasions. I also added less than half a teaspooon each of ground cinnamon and mixed allspice. When the beetroot had finished boiling I poured in the water and discarded the vegetable.

Monday morning I added a teaspoon of nutrient and pectolase. I started a teaspoon of yeast in half a pint of sugary lukewarm water and once that was going put that in too.

After stirring once a day, I put the wine into its demijohn on Friday, 9th April whilst listening to the extensive coverage of Prince Philip's death. It was a quick job (the wine, not the death) (though that might have been too) and the wine is a pleasing colour. I have wrapped the demijohn in newspaper, however, so that the colour does not deteriorate (which apparently happens with beetroot wine).

This bottle was retrieved from our crypt on Easter Sunday. I had spent most the day in the kitchen, making peanut-butter cookies, followed by a lemon meringue pie (a Triumph, he said, modestly) and then the beginnings of Spiced Beetroot Wine, all while listening to Classic FM's Top 300 Countdown.

This wine was a sherry-like as ever and was certainly effective. It would be dishonest to blame the subsequent poor night's sleep on anything else.

"Odd" was Claire's description of choice. Followed by "Not unpleasant" but that was as positive as she got. I like this wine: it is very much 'home brew' but not in a bad way. The taste is sweet and had a hint of vegetable to it. I would happily serve this in polite company.

We drank the bottle on Maundy Thursday during which I was culinarily adventurous - Roquefort and mushroom stuffed pancakes a la Nigel Slater. Pancakes have been my downfall in the past, but last night they were circular and unholy, which I count as a success.

Sunday was a day full of domestic chores. The best of these was making Blondies with Peanut butter-cream icing (calorie content: astronomical) but there was also much sweeping and tidying. Not that there is anyone allowed to visit until 17th May, but sometimes I get fed up of living in grime.

In the evening I opened this bottle of blackcurrant wine - which was as tasty a bottle as blackcurrant can be - and we had a beef & spring onion stir-fry courtesy of Padian Foods. Blisteringly hot as ever - which is not a bad thing. Then Line of Duty and a sleep interrupted by two mice gifted by Wiggy.

Blackberry 2019, on the strength of this bottle, is a fine vintage. It is a wine that is deep and round and delicious. Therefore it is unusual, and shows remarkable restraint, that we have stretched it out over two nights. Friday was a result of having too much to drink on Thursday. Tonight, though, has been Decided By Claire. I quite fancy a whiskey but we have had a Manhattan already and she is probably right. Claire would replace "Probably" with "Definitely"