Tuesday night is The Great British Bake Off night, and we were down to the penultimate episode this week. As always, we were allowed treats during the ad-breaks, and one of those was a glass of Rose Petal Wine. Claire would argue that this was not much of a treat. The pear tart was better.

On Wednesday night I stayed up to finish both Skippy Dies and this bottle of wine. The book was fabulous - it captured 14 year-old male adolescence beautifully, was riotous and hilarious and, in places, very very dark. I must seek out Paul Murray's others.

We drank most of this bottle on our return from Wakefield on Saturday night. Claire had been playing 'Third Viola' in Heinrich Biber's Requiem and I had the important role of chauffeur and dozing audience member. The music was beautiful: choir, string orchestra and three trombones: but induced sleepiness. As the movements passed by I would wake for the start of each and then return to my slumber. Claire drove home.

The rhubarb wine had been waiting in the fridge and I drank most my share in bed getting on with my book - Skippy Dies.

Tonight we have had the Wesleyan man around to discuss our finances and this always induces anxiety. To deal with this, after he had gone, Claire and I have knocked back a bottle of Tutti Fruti at shocking speed - particularly bearing in mind that it is a Thursday. And I'm walking to work tomorrow. The wine, though, is excellent and one of the very best Tutti Frutis that I have made.

This was a splendid bottle of elderberry wine - everything elderberry should be: dark, smooth, rich, fruity. We drank it on a lazy Sunday where the weather encouraged us not to leave the house. Mostly I obeyed that, and stayed in to make apple & strawberry wine.

In the evening we ate a venison sausage casserole and then lay on the sofa and read. I'm reading Skippy Dies by Paul Murray, which I absolutely love. It is a coming of age novel set in present day Ireland, which is warm, funny, tense and loving - with a load of physics thrown in. 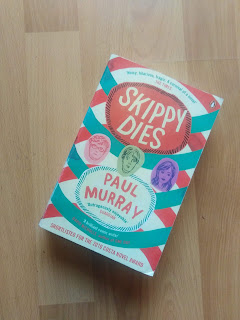 This apple wine isn't half bad. The apple flavour may not be as pronounced as previous vintages and there is a heavier consistency, but it is definitely drinkable. I would rate it as a 'Mid Week Plus'. I chose Apple on Saturday night, partly to go with the Turkey Meatballs in Plum Sauce (delicious) and partly because I spent Saturday making Apple Wine. By the end of the night there was still nearly a glass each, so we saved it for Tuesday to count as one of our Bake Off treats.

If you want to see how I made this wine, click here.
Posted by Ben Hardy at 08:05 No comments:

Email ThisBlogThis!Share to TwitterShare to FacebookShare to Pinterest
Labels: Apple, food, The Great British Bake Off 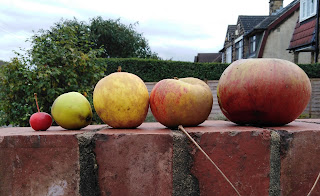 Last year our apple tree was prolific, much to the joy of local blackbirds and squirrels. This year it is far less so and as of mid-October the apples have only just begun to drop. Those that have fallen are mostly half-gnawed - I suspect by the garden rodents - so I can only use those for apple wine with some judicious chopping. Our crab apple tree has done better than last year - but has still only produced 1 lb 4 oz of apples. Each of these two wines require 4 lbs of apples, so I have had to look beyond the confines of our garden for additional fruit.

On Saturday 12th October, after accompanying Claire back from a Park Run (I did not participate myself) I spotted windfall apples on the opposite pavement so, much to Claire's embarrassment, I crossed the road and started collecting them. She left me to it. These apples were small and bruised, but still worthy ingredients. I also noticed that a house round the corner had put some apples in a box outside their hedge for people to collect, so I made full use of these too and ended up with 8 lbs of apples (weighed after chopping out the bruises and the rot and the squirrel tooth marks) that I needed. 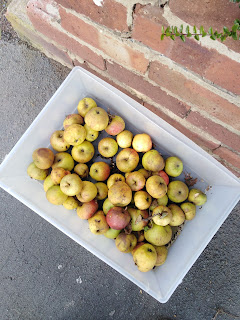 I made the Apple Wine of Saturday and the Apple & Strawberry Wine on Sunday. For both I washed the apples, cut away all rot, removed any invertebrates that I spotted (only one had a grub but several had woodlice) and sliced them using the food processor. 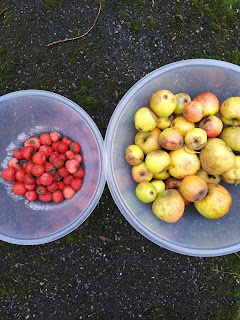 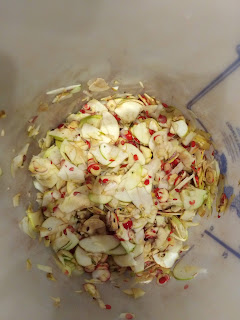 Once each had cooled (Sunday morning for the apple and Sunday night for the other) I added teaspoons of nutrient, pectolase and yeast to both buckets.

By Friday these were ready to put into their demijohns. I had returned home from Drinks with Work so had little inclination but knew this must be done, and so that's what I did to no great disaster. This year there is little colour difference between the two and I suspect substandard strawberries account for the lack of pinkness. 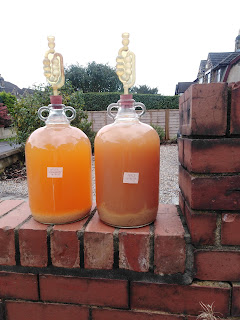 Thursday night should not really have been a whole bottle of wine night. It has been a long and difficult week at work though - that first week back after a holiday is always horrendous. There is so much to do and I have needed to work particularly fast to stay afloat. Hence drinking a bottle of orange wine was remarkably easy - and I only suffered a little for it on Friday morning.

After the wine had been finished, Mom rang in a flap asking for legal advice on a solar panel contractual matter. I muddled through as best I could.

It is nice to be home. We returned from a week's holiday in Croatia on Saturday evening, so Sunday was our first day back in Leeds and familiar territory. It was a good holiday and whilst England was wet and windy, we had plenty of sunshine throughout the week. Best moment? Possibly eating grilled sardines in a concrete bunker and drinking copious amounts of red wine.

Back at home my first bottle was blackcurrant - always a popular choice - to go with turkey meatballs followed by Tootsie on DVD: one of my favourite films.

What a fabulous bottle of elderberry wine, if I do say so myself. It is entirely smooth and all taste of metal has gone. A dark, rich wine that is the perfect accompaniment to nut-loaf and roast potatoes (for that is what we ate). We are to have a broadly vegetarian week because next week we go to Croatia, where I understand the diet is based on meat and fish. I feel ill-prepared for this holiday and have done little planning for it. Just thinking about it makes me nervous.