Saturday was going to action filled. Our original plan was to have a day out at Spurn Point with Rosie, but that was cancelled so Rosie could be with her immediate family. Then I thought I would spend time in town doing my Annual Clothes Shop. A fierce rain-storm in the early afternoon suggested this was unwise. Instead I spent much of the day watching series 2 of The Bridge, a satisfying and bloody Scandi Crime Drama.

In the evening, because it was Burns Night I had a dram of whisky - and because it was Saturday night, a bottle of elderflower wine. It is a good bottle, though maybe an acquired taste. It has a full, open flavour and went well with the pigeon pea casserole and saffron rice. The pigeon peas came from a tin labelled 'Best Before August 2007'. I take sell-by dates with a pinch of salt.

We spent much of this bottle standing in the kitchen talking about death. So a typical Friday night, then. Over the last week April, and Todd's father have died, and J's condition gets increasingly worse. Wicked Uncle Henry is trapped inside his body and no longer wants to live. Things are pretty grim if you think about them too hard. Still, gooseberry wine helped lighten the mood - even if it is far from my best batch of this flavour - and we had fish-cakes for tea. So it isn't all doom and gloom.

It has been nearly two weeks since we last had a bottle of home-made. This is partly down to Claire's regime of only drinking during weekends of January and partly because last weekend we only drank the real stuff. Happily, Friday counts as the weekend so we had a bottle of crab apple, which is a dependable wine. There was nothing flashy or out of the ordinary about the evening and crab apple fits with that. Friday nights are a chance to catch up over the week, eat whatever is left in the fridge and sink slowly into fuzziness. All these aims were achieved.

I take it all back. Tutti Fruti 2012 is no better than its 2011 version. I found this bottle dry and uninteresting. 'Thin' is the overriding adjective. I brought it with me to Newcastle and the general consensus was that the wine was okay. Judith was more positive, but that is in her nature. Other than the wine, however, it has been a lovely day. Claire, Judith and I went for a potter along the beach near Widdrington and then to inspect a ruined chapel built by the Knights Templar. Northumberland has wonderful beaches - long stretches of golden sand hidden by dunes. Empty, too. But that might be because it is early January.

We are at 3 The Alders for the very last bit of Christmas holiday (albeit I did have a day at work on Thursday) and I brought a bottle of rhubarb with me. It was a pleasant evening catching up with the Taylors. We have not been since June, and I think this is the longest period away since I met Claire in 1995.

The rhubarb wine was the second of two bottles - the first being a French red to go with beef. We spent our time drinking it making vague plans to go to either Amsterdam or Budapest. The last time we were on holiday with Bob & Judith was a trip to Ireland ten years ago. Anyway, the rhubarb wine did its thing and I went to bed tiddly.

Well, this is rather splendid. I was expecting the words 'cloying', 'oily' and 'saccharin' to figure. Instead what I got was something exotic, only medium sweet and pleasant. Starting with low expectations is the key to delight. I now regret not saving this for our trip to Newcastle this coming weekend.

It was the first bottle of the year and was in marked contrast to the weather, which was dark and depressing all day. Apart from a trip to Sainsburys to buy gin, we stayed inside and did New Years Day activities - jigsaws, books, making bread, curry and wine - that sort of thing. And now let 2014 commence in earnest.

If you want to see how I made this wine, click here

We have just returned from a lovely evening in York spent with the parents, Rachael and Myles. It being New Year's Eve, I took something fizzy. There were no explosions on the drive over, but the cork made a 'pop' on opening and pink foam gushed forth. This wine is dry, though not unbearably so, and I think having given it three months to mature has helped. Everyone liked it.

We presented Myles with his Christmas present - a (mostly) wooden 'My First Percussion Set', complete with xylophone, marracas, triangle and drum. Myles was entranced by the hanging chimes and seemed genuinely pleased (though it is difficult to tell with a one year old). It is the sort of present that is every new parent's worst nightmare, but Rachael had suggested it so I refuse to accept any blame!

It has been a glorious, lazy day entirely fitting for that period between Christmas and New Year. I have either worked on the Christmas jigsaw - a 1,500 piece puzzle with classical music as its theme - or read The Moonstone which is engaging and much funnier than one expects Victorian literature to be.

Unusually for this end-of-year week, I stuck to the orange wine and did not bookend it with various spirits. This is nearly my equivalent of a sober evening. We drank it to home made curry - including a Kashmiri pilau rice and (the highlight) a fabulous red fish curry that cleared nasal passages and caused eyes to water.

If the first day of the year is any portent, 2014 will be dark and miserable. Just at this moment I am in a 'glass half empty' mood. My bassoon practice has gone badly and I can better understand why Claire becomes down when her viola has not done what she desired. At Airedale Symphony Orchestra we are playing The Polotsvian Dances and I can't play it quickly enough. And try as I might Morning from The Peer Gynt Suite refuses to stay in tune. Oh well. At least I began my Lemon and Lime Wine today. This is a brand new flavour and ticks off yet another letter from my wine alphabet. 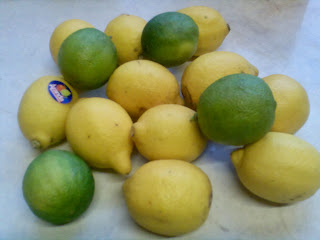 Before Christmas I saw that Noshis was selling 11 lemons for a pound. The limes were also good value at five for a pound. Never one to miss a bargain, I snapped them up and used all the lemons and four of the limes for this wine.

I began by thinly peeling five of the lemons and two limes, trying to avoid the pith. The peel is now in a bowl and covered with a pint of boiling water and a layer of clingfilm. I then squeezed all fruit, which produced a pint of juice, and put this together with the citrus detritus collected in the squeezer into my bucket. I added three pounds of sugar and five and a half pints of boiling water. My current worry is that the lemons were all really rather small (hence the price) and this may result in a bland wine. 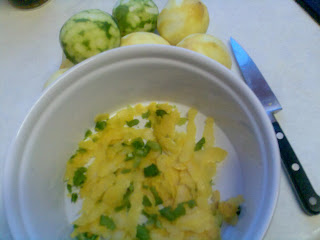 On Thursday morning, before my first day back at work following the Christmas break, I added the yeast, a teaspoon each of pectolase and nutrient, and the water which had covered the peel. We went to Newcastle on Friday for the weekend so the wine did not get its twice-daily stir. 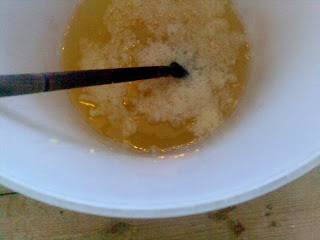 I put the liquid into its demijohn on our return - the evening of Sunday 5th January, sieving out any solid (mainly pips). Rather than a bright lemony-yellow hoped for, the wine is biege. 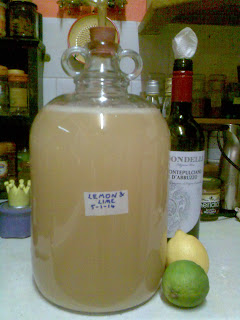 If you want to see how this wine turned out, click here
Posted by Ben Hardy at 18:58 No comments:

Towards the end of Saturday evening, Duncan realised that we had yet to open the blackcurrant wine. This was easily, though not sensibly, remedied. It was our fourth bottle of the evening. But the period between Christmas and New Year is never meant to be one of abstemiousness. Earlier we had drunk a bottle of ginger, some ordinary white wine transformed into Kir, and bottle of real red from 1995 that I think was probably rather special. Rachel fed us steak and chips, adding up to a night of excellent food, wine and company. In fact we did not finish the blackcurrant, good though it was, and Rachel has promised to return the (empty) bottle on her return to Leeds.

This bottle was the first of a four bottle night. Between four of us.

Claire and I were down in Cambridge spending a couple of nights at Duncan's. He has a wonderful house, reminiscent of a three sided Roman villa (complete with hypercourse) and mostly open plan. The four bottles were a reward for a seven mile walk from Little Thetford to Ely and back. Cambridgeshire is entirely flat, not a hillock to be seen in any direction. Ely Cathedral was splendid - its painted octagonal tower being the outstanding feature. It ticks another cathedral off my list, too.

None of this has anything to do with Ginger wine, though. It was a good choice of first bottle - you wouldn't want any food with it, owing to its sweetness. The ginger flavour is about right and on the whole a very tasty wine.

Tutti Fruti 2012 is better than Tutti Fruti 2011. It has a richer, deeper taste with elements of pepper. Mind you, it was (very nearly) my last bottle of the evening and so I might have lost my sense of discernment.

Immediately after the meal we opened presents, so there was a flurry of wrapping paper and thank yous. Ellis's presents included a horn, a bell and a drum - none of which came from his parents. I was responsible for the drum and expect to be cursed often and loudly during the year.

Claire said she didn't want any presents, so I got a reputation for bravery by not getting her any. I did, however, get the nephews to wrap my chin so that I could present her with a goatee.

If you want to see how I made this wine, please click here.
Posted by Ben Hardy at 13:16 No comments:

Keith and family are in York for Christmas, resulting in a chaotic, charming day. Unusually for Christmas at the Hardys there have been no tears or raised voices, and I may not wait a decade until I brave it again.

We had the full turkey works for Christmas dinner, allowing Claire to have her annual sprout and pull her 'This is nasty' face (which sometimes appears when drinking my wine).