This bottle finds me returned from an Airedale concert in Saltaire. It has been a long day, and one where a bottle of orange wine is well deserved. We played lots of loud, difficult music - and I can't decide whether The Three Cornered Hat or  Francesca da Rimini  was the loudest and most difficult. It all went well, though, and I returned on a high.

We drank much of the bottle in front of the stove, aprreciating the silence (apart from the occasional turn or a page and a purring cat). The sharpness of orange wine should bring clarity to the day, but in fact it has done the opposite.

A televisual extravaganza and unusual pizza were the accompaniments to this bottle. Claire and I wrapped up warm, ventured into our Attic Room and watched the first episodes of Bleak House and Torchwood Series 3. I have seen both before, and both are terrific (in very different ways), but Claire has seen neither.

The pizza flavours were: spinach, baked egg & cured ham; and beetroot, pine-nut & feta. Both worked brilliantly. The wine, of course, was delicious. This is an excellent vintage of Christmas Tutti-Fruti - there is a richness and darkness to it, and in fact that describes both Bleak House and Torchwood: Children of Earth.

I worked out that this was the first Friday night (if you discount Christmas Day) that I have spent in the new house. We moved in on 4 December, but what with book group, Christmas parties, trips to Cambridge and theatre visits, my Friday nights have been filled. So it was lovely to spend an evening sat in front of the stove with Claire, drinking crab apple wine (which Claire described as having a bitter taste - I could not detect this) and reading. My current book is The Moor's Account by Laila Lalami: historic fiction about the Spanish exploration of America in the 1560s. It is hugely readable and well put together.

Kirsty came to stay on Tuesday night: she had a meeting in Leeds on Wednesday morning and we were a convenient base. I had already arranged wind quintets in Ilkley that night, so I opened a bottle of blackcurrant and left Claire and Kirsty to it. I imagine they spent the evening chatting about embroidery, shoes and the colour pink. There was still wine in the bottle when I got back, so I had a nightcap and caught up with Kirsty.

Claire and I had the last half glass each on Thursday night while haggis was in the oven.

The great majority of this bottle was drunk on Saturday, rounding off a lovely day. Rhubarb wine has a pink glow to it that somehow fits with a splendid weekend. Much of the day was spent pottering around Harrogate. We took the bus, allowing a boozy lunch in a Turkish restaurant. The waiter was only a little surprised when we ordered four starters and no main.

We then wandered into a posh furniture shop, not intending to buy anything. The sales woman hand us each a glass of mulled wine, and we walked out, having ordered a Teak-root side table.

In choosing to make ginger wine, I may have created a monster. The demijohn looks as if it holds a nascent life form, waiting to burst forth and devour everything in its path. But more of that later.

I wasn't sure what wine I would make this January, it being the traditional month to experiment. Tomato and Carrot were both possibilities. The Fforde Greene Continental Supermaket, however, had a small selection of manky carrots and a large selection of expensive tomatoes. Not having made Ginger Wine for some time (and being a huge fan of the Whisky Mac) I decided to play safe (or so I thought). I bought a large amount of ginger, four lemons and a pound of sultanas.

On past occasions when making ginger wine, I have never thought the end result gingery enough. This time I weighed out a five ounce piece of root ginger, which is twice what I have used before, skinned it and sliced it very finely. This went into my bucket. I then finely peeled the lemons, trying to avoid the pith, and put this peel in as well. Next I minced the sultanas, added these and poured over three and a half pints of boiling water. I squeezed all four lemons and added the juice. This was all done on Sunday, 17 January. 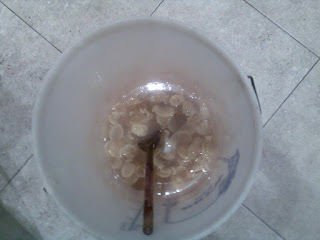 On Monday evening I boiled another three and a half pints of water and added this with two and a half pounds of sugar - my last batch of ginger wine used 3 lbs and was too sweet. Then, on Tuesday morning I added the yeast and a teaspoon each of nutrient and pectolase. The wine sat in the bucket until Friday, giving very little evidence of any fermentation. I decided that this was a stuck wine and that Something Needed to Be Done. So, I put the liquid into one demijohn, throwing out the solids, and put a cork and airtrap in. I then started a new yeast going in half a pint of water and 3 oz of sugar and put this in another (stoppered) demijohn, and left both overnight.

That night the ginger wine decided it was going to ferment afterall, and was having none of this "being trapped in a demijohn" nonsense. It has put out a massive froth, which has slimed its way through the airtrap, and there are brown small clumps floating around. I will throw out the new yeast solution (at a cost of £1.50) and watch this wine carefully, in case it decides to murder us in our beds. 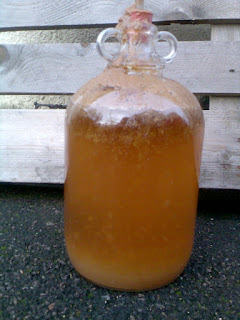 If you want to see how this wine turned out, click here
Posted by Ben Hardy at 18:49 No comments:

This term, WYSO is playing music inspired by Shakespeare. On Wednesday night we came home having played Tchaikovsky's Romeo & Juliet Overture and much of Mendelssohn's Midsummer Night's Dream. All good stuff - and a glass of elderflower wine hit the spot nicely. I'm sure that if Oberon and Titania could choose a wine it would be elderflower.

I finished the bottle on Friday night after we had returned from the Playhouse to see Chitty Chitty Bang Bang. It is a ridiculous musical but was done brilliantly. Once I had turned off my cynicism setting, I sat back and let the fun wash over me.

Claire's take on this flavour was "Mildly unpleasant" and she did not alter her opinion the further down the bottle she got. I thought it better than that - if I was to award it a degree, it would get a mid 2:2. There is a hint of bitterness to it, but the citrus taste of clementines is distinguishable. One to drink when there is nothing at all to celebrate.

This was my first bottle of wine for over a week, and drunk on a Saturday when the main activity was buying unimaginative birthday presents for my wife.

If you want to see how I made this wine, click here
Posted by Ben Hardy at 13:57 2 comments:

The first bottle of the year. Do I detect deja vu? Certainly we were at Duncan's and had spent the afternoon on a muddy walk around Cambridgeshire. So far, so 2015. I served the wine with the stuffed butternut squash cooked by Rachel, and then we settled down to watch a moderately disappointing episode of Sherlock. For once we did not drink far too much - and I will now be off booze for a couple of weeks. Probably.

A (though not the only) New Year's Eve bottle, and I didn't even make it until midnight. I think this was partly down to discovering home made margheritas. We were at Duncan's house, where alcohol flows freely. Strawberry wine is always a good one with which to celebrate. It is so pretty and delicious. But no-one stayed up to see the New Year in. That's what happens in your mid-forties. All of a sudden New Year's Eve is just the 31st December and 1st January is no more special than 23rd February.

Email ThisBlogThis!Share to TwitterShare to FacebookShare to Pinterest
Labels: Rachel and Duncan, strawberry

Between five adults on Tuesday night, we got through three and a half bottles, of which this was one. Claire had cooked a beef stew for Chris, Rachael, Paul and me. Myles, by this time, was in bed having refused his pasta in tomato sauce.

I am writing this on Thursday, and much of Tuesday evening is a blur - but a friendly, happy blur which makes me thankful for my fabulous family. By the end of the evening we were all sat in front of the stove, full and content.

I think it has been several years since I started my Christmas Tutti Fruti on the traditional day, but this year I was taking fruit out of the freezer and weighing it during the Festival of Nine Lessons and Carols from Kings College, Cambridge. The fruit has travelled from the freezer at Carr Manor Mount to the freezer at Bentcliffe Drive and I think Claire has resented it in both. But she now has a whole new drawer in the freezer (almost) entirely empty of fruit.

This year most of the ingredients come from one of our two gardens - only the blackberries, elderberries, figs and satsuma do not. And the figs come from my parents' garden. This pleases me. The wine is a last hurrah for our 17+ years in the Carr Manors and our first hurrah for Bentcliffe Drive.

I left it all overnight to defrost, and then until after Christmas Day lunch because there was a vast amount of spiced pumpkin soup in the tureen I needed to use. All the Taylors helped me crush the fruit and the gooseberries proved most difficult. I made my Christmas wish while mashing and stirring, and then added 5 lbs 8 oz of sugar. I added 12 pints of boiling water and left it all until Boxing Day morn, at which point I added the yeast, two teaspoons of nutrient and one of pectolase.

The wine took two days before there was evidence of fermentation. I put it into its two demijohns on Thursday morning, 31st December, while listening to Mozart symphonies. It took a little longer than anticipated, meaning we missed our 1 pm target of setting off to Cambridge. I now have 25 demijohns on the go and all my air-traps in use.

In October, when the house was still a building site and Rachael visited, she suggested that at Christmas the three older Hardy siblings get together for an evening. The last time Chris, Rachael and I were together without the parents was before she met Paul. Judging by the fun we had on Tuesday night, we must do it more often. It was a lovely evening and the first bottle opened was this crab apple wine. It was fine, without being excellent, and no-one really passed any comment. I think we were having far too good a time.