I have broken a tradition. After many years of drinking the last bottle of one batch of Tutti Fruti and the first bottle of the most recent batch on Christmas Day, I find myself having drunk only the tenth bottle of the older batch instead. I'm obviously not drinking enough.

I shared this bottle between ten at 3 The Alders as a pre-dinner drink and everyone thought it was excellent - which of course, it was. Claire's Uncle Richard said "Surprisingly good". I get that quite a lot.

I had my first ever crisp sandwich while drinking this wine. Claire has mentioned these previously in hushed tones as if describing a thing of beauty and is amazed that I have never had one before. I found the experience underwhelming - very much the sum of its parts. Neither delicious nor nutritious. But we did not fancy a proper meal, having spent the afternoon in Ilkley snacking on Christmas food, while Claire played in Mendelssohn's Octet.

The wine, good as it was, remained unfinished until Monday night, and then I only had a glass to keep Claire company.

Another Saturday, another concert, another bottle of blackcurrant wine. This time the concert was a Christmas Concert in Ilkley, and on the whole I could have done without it. I spent the entire day feeling washed out from my work Christmas party the night before, and I'm never the jolliest person this time of year anyway. However, we drank the bottle round at Mary's afterwards, eating cheese and nibbles, and that bit of the day was lovely. Mary is not a big drinker, so I only poured her a small glass. Followed rapidly by a second.

This bottle was our reward for a concert well-played. WYSO performed Temper by Diana Burrell, Beethoven's 3rd Piano Concerto and Brahms' Third Symphony. It all went extremely well - I think I only hit one wrong note in the first half (though plenty in the second) and I have not been as thrilled by a performance for an age. I am still on a high the morning after.

We got through the blackcurrant wine with undue haste, given only the merest of help by my mother. It was a wonderful evening.

Opened on a Friday and finished on a Saturday - that doesn't happen very often. This might indicate that the wine was somewhat less than palatable, but in fact this is a great batch of crab apple - sharp and light. It was more down to kicking the evening off with a whisky mac and knowing that Saturday was going to be intense - a long afternoon rehearsal followed by a concert. Haviing a hangover would be counterproductive.

We finished the last third after the concert (and, shockingly, after a bottle of blackcurrant) sat in front of the stove, knowing that we had played well. It is a glorious feeling.

Delicious. This vintage of Christmas Tutti Fruti is the best I have ever made. The depth of fruit is wonderful and the slight fizz is entirely beneficial.

We shared the bottle with Matt Byrne, who is in Leeds for a training course - and it was lovely to see him. Claire made three curries - all fabulous (but particularly the lamb) and we discussed defences to bigamy, and whether failing to report one's spouse falling off a cliff amounted to a crime. None of us is planning on putting either of these scenarios into practice.

I think the best thing about this wine is its colour and clarity. It is a wine that shines a copper pink. That is not to say that its taste disappoints. It is a reliable white wine and certainly good enough for a Sunday night, sat in front of the fire, reading. Whilst winter is very far from my favourite season, watching logs burn helps make up for that. The book is Wise Children by Angela Carter which, so far, is superb. If I knew what picaresque meant I think I would describe it as that. It is bawdy, funny and charmingly told. It has potential to be my Book of the Year.

I put this bottle in the fridge many days ago but each time we had occasion to open a bottle of wine (obviously a rare event in this household) we fancied something else. Saturday, though, was perfect for a bottle of rose petal. We were eating vaguely Middle-Eastern food (chicken, olives and lemon cooked in a tagine) and Rachel & Duncan were visiting from Cambridge. And Rachel is a big fan of Rose Petal wine. It was an excellent evening - food, company and drink all wonderful, and we got through much of the last in that list. Rachel misses living in Leeds, having swapped it for village life, and we miss her being just round the corner

Email ThisBlogThis!Share to TwitterShare to FacebookShare to Pinterest
Links to this post
Labels: food, Rachel and Duncan, Rose petal

What a fabulous bottle of wine. My first sip elicited an audible "yum". There is an instant hit of blackberry. Further down the glass this taste becomes less surprising, more expected, but the wine retains its quality.

I have had a lazy day, though more active than yesterday - in that I managed to get dressed and briefly went outside. Only into the back garden to collect apples, but it still required shoes. I'm not certain that I am entirely better - it being only shortly past nine and I'm exhausted, but I am certainly well enough for work tomorrow.

This was a grand bottle of crab apple wine - the apple flavour was unmistakable and it slipped down very nicely indeed. It may have contained a sleeping-draught, however. I was in bed before nine and asleep shortly afterwards. I put this down to my busy week (returning from Amsterdam and then a frantic three days in the office) but I have woken full of cold and feeble. I am also still bobbing about as if on the High Seas, despite my 16 hour crossing ending on Tuesday morning. Now is a poor time to spend more than a weekend ill, so fingers crossed for a rapid recovery.

Thanksgiving was at Richard & Linda's this year, so I took a bottle of Strawberry and Claire took the pumpkin pie (which was fresh from the oven - she had to wear oven gloves in the car). Richard thought the wine was drier than previous years and had more body to it , and I think both observations were correct. It is a lovely wine, and it is a shame I could only have a small glass.

The evening was excellent with two genuine Americans there (Linda and Cindy) and more food that would fit on the table. Everyone was sent home with a box of left-overs.

Email ThisBlogThis!Share to TwitterShare to FacebookShare to Pinterest
Links to this post
Labels: Claire, food, Richard and Linda, strawberry, Thanksgiving

Apple & Strawberry Wine - The Making Of...

Now that it is late November, I no longer need to use a ladder, a rake and some precarious balancing to collect apples from our back garden. A quick poke about on the lawn will do the job nicely. The apple tree is still laden with fruit waiting to fall and is a popular meeting place for blackbirds. This afternoon, 27th November, I saw a squirrel leap into the tree's branches, scurry to the top, pick an apple, scurry to a midway point and then spend five minutes nibbling at it. He didn't finish the apple, though. Just dropped it casually into the flower beds. There are squirrels starving in Africa who would be grateful for that food.

I chose my apples from the windfalls carefully, making sure that I avoided those pecked by birds or consumed by slugs. This was easier than I had imagined and I should remember that if I am going to use our apples for wine in the future, late November is the time to do it. I needed 4 lbs of apples, which translated to 25 in number, and once picked, I washed them twice.

My 1 lb of strawberries came from the freezer, saved specially for this occasion. I gave them about five hours to defrost before starting to make this wine. When I crushed them with a potato masher in the bucket, the strawberries were still firm, but not solid, so mashing was effective.

I cut each of the apples into quarters and then tossed them into the food processor, using the 'slice' attachment. Only one of the apples had been attacked by some insect, and I cut the core out of this one (which looked suspiciously like it contained eggs). Otherwise I used the whole apple removing only the stalk. They all then went into my bucket in which I had crushed the strawberries

I added 3 lbs of sugar and poured over six and a half pints of boiling water, giving it all a thorough stir. The yeast, pectolase and nutrient all went in the same night, when the wine had cooled to 32 degrees Celcius.

The wine was transferred to its demijohn on Thursday evening, 1st December, before I watched the final episode of The Missing (superb television). This was done using the usual collander-then-jug-and-sieve method. Its colour started off peachy, but 24 hours later it is more pink. The wine made its bid for freedom shortly after being enclosed in the demijohn, but I managed to beat it back with a teaspoon. (This was done by scooping out the most aggressive froth from the demijohn's neck and that seemed to fettle it.) 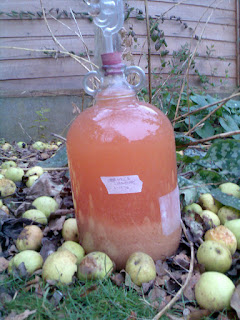 If you want to see how this wine turned out, click here.
Posted by Ben Hardy at 16:30 No comments: