I was in a very bad mood when I opened this bottle. Spending twenty minutes in a traffic jam in Guiseley on a late Saturday afternoon before failing to buy asparagus tends to have that effect. This was on top of a half hour traffic jam in Ilkley earlier in the day. Little makes me crosser. Still, the quartet and trio in between was really good - we were in tune and played well.

Usually when cross I glug my wine. However, this evening I made half a bottle last the duration: watering fruit bushes in the late sunlight, eating vaguely Spanish-themed food (including 'Widowed Potatoes' and a broad bean & chorizo mix) and watching Doctor Who - which was not as good as, and more confusing than, last week's episode.

This batch of Elderflower wine is a winner: strongly flavoured, refreshing, dry and light. Never mind that I should have waited until June before opening a bottle.
Posted by Ben Hardy at 22:43 2 comments:

I have spent most of today avoiding the Royal Wedding. Though I'm not a Republican, there is only a certain amount of fawning I can stand. Radio 4, at half past eight this morning had Sarah Montague being earnest, discussing what the happy couple might do after their honeymoon. I turned the dial quickly to Radio 3 and did not turn it back until 5:30. Whereupon, Carolyn Quinn was reporting on the hundreds of thousands still lining The Mall. Two stiff gins and finishing this bottle of Crab Apple wine seemed like the only proper solution.

We drank the wine to a meal of bean-burgers, a tomato sauce (not ketchup) and coleslaw with homegrown rocket dressed in a horse-radish oil. Sensibly, I am now on the bush tea and we will not open another bottle tonight.
Posted by Ben Hardy at 20:18 1 comment:

There is a vague taste of banana to this wine. Which is odd, as no bananas were injured during its making. If one concentrates, lemon is also detectable, and that is more understandable. The wine is by no means unpleasant, but is unlikely to set the world alight. Definitely a mid-week bottle, akin to an uninteresting shop-bought white.

I opened it on Tuesday - a day which even this close fades into anonymity. I think I spent some of it reading 'The Lacuna' by Barbara Kingsolver, which took a little getting into, but is beautifully written. We each had a glass after orchestra last night (more Beethoven 7) and I am now finishing it, after a day which has seen me interviewed for a job in Wakefield. The drive over saw a stack of hawthorn blossom in the hedgerows - already, and it is still April. It is likely I shall start work as a locum property lawyer there (Wakefield, rather than the hedgerows specifically) in a fortnight.
Posted by Ben Hardy at 20:09 2 comments:

Claire has just cooked one of the most delicious meals ever, and is currently assembling a rhubarb cobbler. And all this to a bottle of Blackberry 2008. Does life get any better? We had a range of small, vaguely Mediterranean dishes, including garlic tomatoes, a pesto-ish dish with parsley - rather than basil - as its base, and (best of all) lamb marinated in yoghurt, garlic and schumach (?) then fried in hot oil. The wine was fabulous too - it has aged well and it is a shame this is the last of its vintage. We have finished it shockingly early - before 8 p.m. - and shall probably move onto spirits. Still, it is Easter Monday.
Posted by Ben Hardy at 21:07 No comments:

I bottled the three demijohns of Crab Apple Wine on Saturday. Claire had the brilliant idea of not putting a cork into this bottle as I was doing this, thus saving me approximately seven pence. It also made the choice of which flavour to drink far easier.

Most of the bottle was drunk on Saturday night to home-made goats' cheese and rocket pizza - which is an excellent combination, though molten goats' cheese can take the lining off the roof of one's mouth. We also watched the first episode of the new series of Doctor Who, which was fabulous. It was properly scary and intriguing and funny, and waiting a week for the next one feels like punishment.

I finished the wine tonight, Easter Sunday, after a phenomenonly lazy day involving squishing 77 sawfly larvae, failing to do the Guardian Soduko and general lying around, occasionally eating chocolate.
Posted by Ben Hardy at 20:53 3 comments:

This wine has been brought to you by Moussaka and Knitting.

I was on cooking duties today, as I have been for the whole week, and had planned to do something entirely new. However, on looking through the many cook books, nothing jumped out saying "make me". So, I dug out Delia and made Moussaka, which I have not done for a couple of years, and therefore that almost counts. Elderberry wine goes well with it - the sweet, deep red complements the lamb and cinammon.

Elderberry wine goes less well with knitting. Sooz taught me the basics this afternoon and then needed a gin to recover. I am getting the hang of it, but have to concentrate extremely hard. There are meant to be twenty loops in each row, but within three or four rows of me knitting solo, there were twenty seven. I do not foresee this becoming a regular hobby.
Posted by Ben Hardy at 21:59 4 comments:

This was our first bottle of this flavour and it was, frankly, disappointing. The overall taste was bland, backed up by an aftertaste of mustiness. Claire described this as 'dead mouse'. I sent an e-mail to The Good Life Press, to whom I had sent a bottle of this (and eleven other flavours), apologising and advising them not to feed this to any bulk book buyers.

We finished the bottle tonight, once Sooz had arrived for the Easter weekend. She was less damning than Claire, but drinking the wine chilled helped. This evening Claire and Sooz have been discussing knitting fossils and dinosaurs and have threatened to teach me how to knit one, pearl one. I see tomorrow ending in tears.
Posted by Ben Hardy at 07:22 No comments:

This month does not resemble Aprils I have known. We have had no rain and almost continuous sunshine. Dandelions appear to love it. Roadside verges are blanketed in a glare of golden yellow.

I have given dandelion wine a four year break, in the hope that it will be better this time. And it had to be dandelion this year because I said it would be in Home Farmer Magazine. April is a difficult time for wine anyway because buying ingredients feels like cheating. So, towards noon on Sunday morning, 17th April, I put on sun cream, donned my Hat, and drove to Lawnswood Crags. I took a measuring jug with me to allow me to measure whilst I picked, rather than come home with either far too many or irritatingly too few flowers.

Getting six pints of flower-heads proved rapid work. An old man asked if I was making a potion, and a young girl with Downes Syndrome asked questions, but otherwise I was undisturbed.

Once home I put the dandelions in the bucket, picked three from our garden and also put in most from the posy of dandelions Angie and Phil brought with them last night. I rescued one ladybird and as many money spiders as I could and poured over seven pints of boiling water.

On Tuesday evening, 19th April, after a boozy lunch with Rodney and an afternoon of feeling unsteady and squishing 86 sawfly grubs, I added 3 lbs sugar and the thinly peeled rind of 2 lemons and one orange. This was then poured into a big pan, brought to the boil and kept boiling for ten minutes. It took an age to start boiling, and the floating carpet of dandelions made it difficult to tell when it was. I used the time productively to bottle my Blackcurrant Wine. The whole mix went back into the bucket over the juice from the citrus fruit. Claire dislikes the smell now permeating the house, but I think it pleasant. 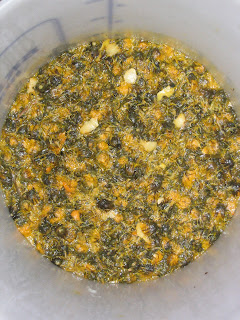 I put in one litre of white grape juice, the yeast (Hock variety) and a teaspoon each of pectolase, tannin and yeast on Wednesday morning. I shall filter out the dandelions and put the liquid into a demijohn on Saturday.
Posted by Ben Hardy at 11:57 5 comments: