We are into the bottom three wines at this year's Wine Party and I am genuinely surprised to see Blackcurrant there. It came tenth of twelve. Duncan scored it -1 and wrote "Repellent. The devil's wee". I probably should not take a bottle to Cambridge for New Year's Eve. Helen and Anthony both scored it a 4, though.

The party as a whole was excellent, but left me completely wiped out on Sunday. I had to have two naps and otherwise the most energetic thing I did was to lie on the chaise-longue and read. #NoLongerInMyEarly40s

I had not planned on opening this bottle at the Wine Party. At previous parties, ten bottles of wine had been plenty, with some to spare. And this year I initially opened eleven. By ten o'clock, though, I could see that a new bottle was needed so I fished out an Orange. It was not a universally popular choice, coming 9th out of 12. Matthew hated it: he gave it a score of -1 and wrote 'Toilet Duck'. Claire riffed on the same theme - "Superior cleaning fluid" - but was generous and awarded a 3.

Blimey, this wine split the room. David scored it a 5, Lindsay scored it a zero, and it got every number in between. This meant it came eighth out of twelve at the Wine Party, with an average score of 2.86. It shows how subjective taste can be. Those who liked it tended not to comment (though Kate wrote 'Tingly'). Those who did not were more eloquent, saying 'A bit musty', 'Grassy aroma' and 'Smell is not inviting. Taste is worse'. I awarded Fig Wine a solid 4. It is not as good as 2015's vintage, but I would still choose it above many of my wines. I think some of my guests were just wrong!

In past years blackberry wine has won the Wine Party. This year it has come in the bottom half: seventh of twelve with an average score of 3.21. A poor show. Rachel and I conjectured about what might be different - possibly the sweetness of berries picked.

Three of my guests - Phil, Matthew and Anthony - described this as tasting like real wine, with only Anthony thinking this was a Good Thing. It was a glorious party, though - mostly taking place in the dining room and kitchen. Despite the fire and moody lighting, our front room was ignored.

Without Liz's score of 1 (with no comment) and Anthony's score of 0 ("Too much ginger") this wine would have done well at the Wine Party. Everyone else scored it between 3 and 4.5. With those scores, though, it came sixth of 12 with an average score of 3.39. It was Rodney's favourite, and he knows a thing or two about wine. Matthew wrote that it was like being hugged by a cactus and awarded it a 4.

To some extent I'm vaguely surprised that anyone came to the party. Storm Brian meant that it was such a filthy night that even stepping outside to fetch my white wines (which had been cooling due to no room in the fridge) meant I got an absolute drenching - despite wearing full waterproofs.

We are definitely into the 'Also Rans' at the Wine Party. Rose Petal came a disappointing fifth out of 12 with an average score of 3.41. I think Jayne skewered the results by awarding it a zero and throwing her glass down the sink. Three people gave it top marks and that is more than one of the joint winners. Rodney thought is bitter and Duncan, having been versed in teenage lingo by Daisy (the youngest guest at 16) wrote "Proper bum". Which is a good thing. Apparently.

This wine came third at my Wine Party, with an average score of 3.92 (out of 5) and more people trying this flavour than either of the winners. It was my personal favourite of the evening. Matthew noted that it was 'squashey' and I have no idea what that means.

The Wine Party was excellent. There were 17 people there and it went on until past midnight. If you include the two bottles of Prosecco at the end but discount the Chardonnay at the beginning (which was only a third full) we got through 14 bottles.

When Shirley died in 2009, I found a demijohn full of dark liquid in her house. Lucy said I could have it, so I took it home and bottled it. There were no labels so I have no idea from what it was made. Having opened a bottle for this year's Wine Party (where it was joint winner, with an average score of 4 out of 5) I am none the wiser. I thought it was extraordinarily like port, whereas others thought sherry, Helen said 'Masala' and Claire wrote 'tastes of aged oboe reeds'. Despite Claire's opinion, I loved this wine. Dark, sweet and mysterious.

Officially my best bottle of wine. This flavour won 2017's Wine Party, getting an average score of 4 out of 5. Four guests gave it top marks, with only David scoring it as low as a 2. Helen wrote "My favourite so far," which sounds like a reasonable, if bland, comment, until you notice it was her first one tried. 'Delicious' appears a couple of times. Phil tried it twice, thinking it was two separate wines. He gave them/it the same score, but remarked that the second was 'perhaps a bit cleaner' than the first. It wasn't.

While on the motorway, heading for Newcastle, in the dark and the rain, Claire said she was feeling peckish. I replied that I hadn't had sufficient brainpower to even think about food. "I have thought plenty about alcohol, though." It was some relief that we arrived safely and I did not give the wine any cooling time at all before opening it.

We were in Newcastle as a half-way stopover before Jennifer's funeral on Friday, which was in East Lothian. She was buried in a forest on a beautiful autumn day in which dappled sunlight filtered through the beech trees. Her send-off was a strangely lovely and moving experience.

This rose petal wine is splendid. The colour and clarity cannot be criticised, and the taste is delightful. Floral and exotic. It has been our treat after a concert full of Fifth Symphonies (Beethoven and Mendelssohn), where the audience failed to clap after the end of Mendelssohn's. I think this is because they hadn't realised it had ended, rather than we played it badly (which we did not!). Since the concert, Claire and I have drunk the wine, chatting companionably in the front room. It has been a lovely evening. 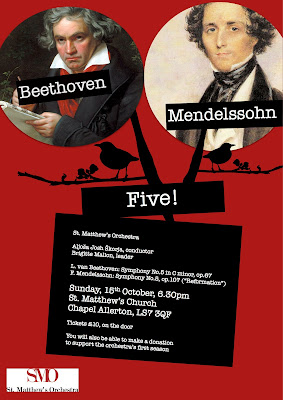 A bitter-sweet bottle of wine, and that does not describe the flavour, which was full and fruity. This was our first bottle after a fabulous week in Corfu, where we had blue skies, golden beaches (only one of which contained nudists), mountain walks and wonderful food. I came back, though, to the news that Aunt Jennifer had died. She was a woman I liked enormously and there is an empty space where she should be. Everyone has their time - but it should always last just that little bit longer.

This time tomorrow I should be in Corfu, and I have been ridiculously excited about it for a week. I have not been sleeping well. I am 47. Maybe this bottle of blackcurrant wine will help tonight, but I can already feel that buzzy sensation above the stomach and below the heart that anticipation brings. Next, the bottom of my feet will start tingling, the way they do when I am on a high bridge, looking over the edge. I have tried to keep this evening as normal as possible which of course involves a bottle of wine (delicious, by the way) but also a mountain of washing up and an episode of Bake Off cuddled up to Claire on the sofa.

Email ThisBlogThis!Share to TwitterShare to FacebookShare to Pinterest
Labels: blackcurrant, Claire, holiday, The Great British Bake Off, washing up

I hadn't meant to open this bottle, but it was clear that once the elderberry was empty something further was required. And we are officially on holiday (Corfu on Sunday!) so there is excuse enough.

Rachael, Paul and Myles were here to help us share the wine (well, not Myles - he's four) and of the three bottles, this was Rachael's least favourite - too sherry-like. We discussed the Hardy method of washing up and how Rachael and I are both excellent at balancing clean dishes to dry. I wonder if Chris and Keith at both similarly good.

For Rachael, Paul and Myles's visit, I decided to open two bottles; one white, one red and both originating from the elder tree. (It actually turned into a three bottle night, but who's counting?) I drank more of this one than the other even though our meal of roast chicken called for a white. It gave me sufficient Dutch courage to deal with the largest spider I have ever seen outside of California. Paul said 'Tarantula', pointing at the wall, and there was an enormous wolf spider. I caught it in a glass after a bit of shrieking from Claire, and deposited it outside. The cat flap remained well and truly locked.

NB - I'm away for a week, so there won't be any new updates until at least 7 October.
Posted by Ben Hardy at 07:57 No comments: