This bottle accompanied an evening of games and hilarity. I took it to Ros's for a 'Games Evening', where we played Saboteur, Exploding Kittens, Bug in a Rug, Articulate and Blokus. All accompanied by cake and wine. In 'Articulate' Emma had to describe 'Rack' to me and all I could get was 'Breasts'. It took several minutes for the room to recover.

The wine was fabulous - even Alex, who has not been a fan of my wine in the past, thought so. It takes the best of both fruits, creating something refreshing and different.

It has been a long time since we opened a bottle of Julia's ancient wines. When this one was being made, I was sitting my Law Society Finals and would not meet Claire for another two years.

I took the bottle to Ros's for an evening of Board Games and hilarity, and it was appropriate that Julia was represented. The wine looked beautiful and had an attractive scent. We all raised our glasses, toasted Julia, took a sip and poured the wine down the sink. It had not aged well.

Jasmine Tea Wine is the very definition of a mid-week bottle. Drinkable but not delicious and certainly not a treat. It is far better than pure Tea Wine, but the tea-flavour is still too strong, which creates a drying effect in the mouth. If I were to make this again (which seems unlikely) I would use half the quantity of tea.

Most the bottle was drunk on Wednesday, but we had enough left with which to celebrate Valentine's Day. Who says I'm not an old romantic?

This wine has not aged badly at all. It remains a light and crisp white that could pass for a wine made from grapes. We have drunk it to a fish curry and a game of Blokus - a tactical board game involving Tetris-shaped counters and a dash of evil.

Earlier in the day Claire and I went for a five mile (though I would argue, longer) walk around Tong and Fulneck. We haven't been walking just the two of us for an age and it was a pleasure to be in the fresh air. Muddier than expected, however. We both made the mistake of wearing trainers rather than walking boots and I suspect they will never recover.

Claire was out on Saturday afternoon playing Dvorak in Menston, so I was on cooking duties. I briefly considered being adventurous before rejecting that idea in favour of Toad in the Hole. Sausages, after all, are hard to beat. And sausages require a red wine - hence a bottle of blackcurrant. This was sharp and blackcurranty, but 24 hours later, I can't remember a right lot about it. That could have something to do with the whisky macs (in the plural) that I poured myself beforehand.

We spent the evening curled up on the sofa watching a Lewis that I had not seen before.

It being a Thursday, and therefore not a 'Full Bottle of Wine' night, I opened one of my poorer blackberries to go with haggis, mashed potato and cabbage. I think this flavour/vintage suffers from dryness and I wonder if, like grapes, blackberries have better years than others. We only just didn't finish the bottle whilst playing Blokus - an intriguing game of skill and Tetris-like shapes.

Claire had the remainder on Friday night whilst I was playing Octets in Wetherby and hearing about Sheila's horrendous hospital experiences.

I very much enjoyed this wine - there is something smooth and buttery about its taste - not something one would expect in a wine involving orange. It was so good that I have decided this year to forego rose petal wine and only make rose petal & orange instead.

Some of Sunday was spent at Bradford Industrial Museum, which I had not heard of before. It is a fantastic place full of steam driven engines and percussive clanking filling the building.

Leaving this flavour 5 months has done a little to smooth out the wine's sharpest edges, but I still think that this is too young to be an entirely satisfactory bottle - plenty of promise, however. We drank this elderberry on Saturday night after a quiet day mostly taken up with making my prune & parsnip wine - though shopping for food and reading also featured. I'm currently on The Fortress of Solitude by Jonathan Lethem, which is a deeply uncomfortable coming of age novel set in 1970s Brooklyn. Brilliantly written, but cold and brutal. 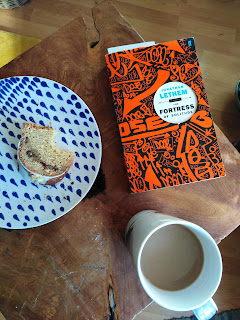 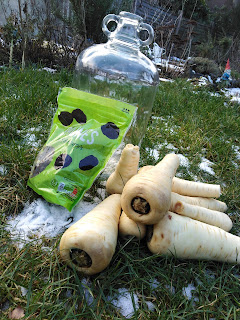 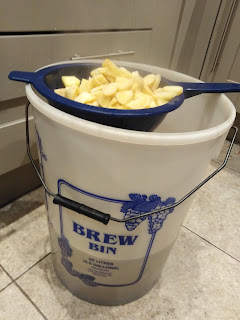 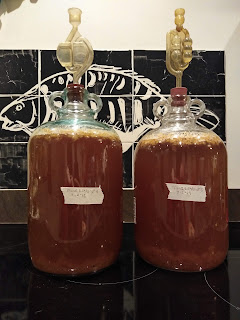 If you want to see how this wine turned out, click here.
Posted by Ben Hardy at 14:05 3 comments:

Email ThisBlogThis!Share to TwitterShare to FacebookShare to Pinterest
Links to this post
Labels: Claire, Leeds, making wine, Prune and Parsnip

I decided that a vintage bottle of Rose Petal Wine would go nicely with roast chicken and all the trimmings that I cooked on Sunday night. Claire took one sip and decided otherwise. Whilst I concur that age has not done great things to this bottle, I would not have gone rushing for a different wine to open.

We drank the remainder on Wednesday and Thursday, with more gusto on my part that on Claire's. It is a useful thing to do, though - leave wines to see how that flavour ages. On the whole, rose petal is better in its youth.

I did not choose this bottle for our evening's drinking. I had chosen a bottle of ancient Rose Petal instead. However, Claire took one sip of that and went to get something better. I would have been happy with my original suggestion, but Claire was right (she so often is) - this was nicer. It is quite a light prune & parsnip - sweet but not overly so and a tasty bottle for a Sunday night. Other than my poor wine selection, I was indulging in "Perfect Husband" behaviour: cooking the Sunday roast with little supervision and doing the washing up as I went. Being a man, I deserve adulation.

If you want to see how I made this wine, click here.
Posted by Ben Hardy at 17:18 No comments:

Email ThisBlogThis!Share to TwitterShare to FacebookShare to Pinterest
Links to this post
Labels: Claire, cooking, Prune and Parsnip, washing up

Claire is working far, far too hard. She is contracted to work 9-5 Monday to Thursday. Currently she is doing 11 hour days and this week she did 4 or 5 hours on Friday as well. On Friday the only decision she could make was that we were to have a Take-Out. When I asked about wine, she looked at me blankly and then repeated that look when I suggested Xmas Tutti Fruti.

Chris and Kate came by to stay overnight on an unplanned trip to Leeds and it was lovely to see them. Neither tried the wine, however. I finished the bottle (which is a good, fruity red) on Saturday after performing a wind quintet at Leeds Music Club - which went as well as could be expected.

[NB - Photo failing to load - I may need to try from work on Monday. Imagine a photo of some sheet music!]