WYSO has, in the past, played on a beach, in a warehouse loading bay and in a swimming pool. We have not done anything quirky for a while. That has changed this week: we are performing La traviata in a disused mill. On Wednesday night we rehearsed there for the first time. It was so cold that you could see your breath. As the singers sang, their music took on this physical manifestation. I wore four layers - three of them fleeces - and could not get warm. Home, then, for a glass of prune & parsnip. Friday was much better, and the opera is sounding fantastic. We finished the bottle as a wind down.

When will it be warm? The weekend has seen yet more snow and I long for a proper Spring. We were in St Albans over Saturday night for Lou's 50th birthday and hot footed it back to Leeds on Sunday morning for a two o'clock rehearsal in Ilkley. Sunday night was spent curled up on the sofa in front of the stove watching Lewis and apologising to the cats. I opened the fig wine for our meal of defrosted leftovers (which was better than that sounds). The wine is lovely - really figgy.

I was all prepared to be distinctly cross with our plumber, but I ended up giving him a bottle of blackcurrant wine instead. He hadn't arrived when we were told he would - by a matter of several hours - and ultimately he did not fix the problem (though he is coming back). However, he was charming and interested in the wine and (most importantly) saved us £100 be declaring to the administrating firm that he had fixed the problem within an hour (rather than failing to fix it within two). That, I think, is worth a bottle of one of my better wines.

Returning home from WYSO, I asked if I should open a bottle and received a positive response. We had been rehearsing with the chorus for La traviata where the six men outsang the thirty or so women. I chose blackberry as a decent mid-week bottle. In past years, blackberry has been for special occasions only, but not this vintage.

I finished the wine on Friday after being in the audience of Vivaldi's Gloria  and Bach's  Magnificat. Claire was playing viola in the tiny orchestra. The Vivaldi was better than the Bach: it felt like the choir were more familiar with it. We walked back in the snow and warmed ourselves with alcohol.

Richard & Linda came round for a meal, and what a meal it was. We started with a carrot & orange soup accompanied by walnut sourdough bread. Our main course was a smoked mackerel quiche with potato slices roasted in lemon juice and rosemary. We broke for a cheese course and then finished up with rhubarb fool and ginger shortbread. Claire made it all (other than the cheese) and my contribution was shopping and tidying. I feel I got the better deal.

I opened a bottle of rhubarb wine on the basis that Richard prefers dry whites. He was really impressed with this one - thought it was one of the best of mine he had drunk. A grand evening.

There is water coming through our kitchen ceiling. This is not a feature one generally wants. 'Happily' this only started on Friday while Claire was in and it was dripping through a gap where pipes run down anyway. Dan Benn came round sharpish, stopped the pipe causing the problem and now we wait for a specialist plumber to fix it. The deal with the anxiety caused, Claire and I downed this bottle quickly - the wine is much the same as previous batches, if a little rougher - and retired upstairs early.

If you want to see how I made this wine, click here
Posted by Ben Hardy at 17:32 No comments:

Ordinarily I wait a year between picking fruit and drinking the first bottle of wine. However, I think that gooseberry may be a wine best drunk young, so I have opened this early. Also, it was a suitable bottle to take round to David & Liz's: we have given them six cuttings from our gooseberry plants and seeing as I have converted Liz to making her own wine, I thought I'd show her what gooseberry wine was like. This was a high-risk strategy: I have had some spectacular failures with gooseberry. It paid off. The wine is bone dry and has a bite to it. There is a slight fizz and the gooseberry taste is there on the first sip before retreating into a prosecco feel. This wine is definitely a hit.

If you want to see how I made this wine, click here.
Posted by Ben Hardy at 17:49 No comments:

My colleagues say that I am a creature of habit. I won't have my first cup of coffee until 9:30 and it must be 11 before my second. When 'lunch hour' was shifted by thirty minutes, I complained. This was not part of my established routine. Taking all this into account, it is unsurprising that I have stared a double batch of orange wine in March. It must be at least fifteen years in a row that I have done this. 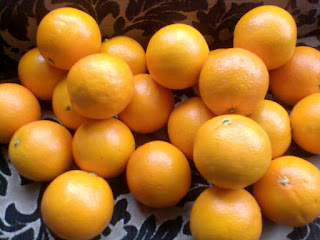 I bought the oranges from Sainsbury's rather than going anywhere more exotic. Whilst I prefer shopping at small, local businesses, we were off to Sainsbury's anyway and their quality is consistently good. Plus the weather was poor - our road was still icy.

I started the wine on Sunday 4th March. The first job was to slice the top layer of peel from 12 of my 24 oranges as thinly as I could, and then cover this peel with 2 pints of boiling water. This is the most tedious part of making orange wine and I did particularly badly avoiding the pith. It took an age (helped along by Radio 4 Catch-Up) and by the end I just didn't care. Having completed this task, I covered the bowl containing peel and water with cling film and left this to one side.

Next I squeezed all 24 oranges and measured the juice - 2¾ pints. This is one less pint than last year, which suggests this orange wine will not be as good. I put the juice into the bucket along with 10 pints of cold water and 5½ lbs sugar. I also added the yeast and a rounded teaspoon each of pectolase and nutrient at this point. 24 hours later I poured in the water that had been covering the peel into the bucket and I discarded the peel.

I had meant to put the wine into its demijohns on Friday night but was otherwise distracted and did this on Saturday morning, 10th March, instead. The wine currently looks like orange squash - a jolly, opaque yellow. 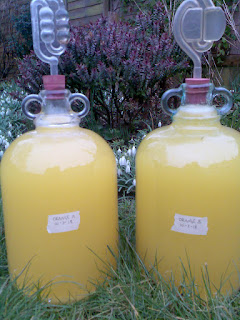 If you want to see how this wine turned out, click here
Posted by Ben Hardy at 13:47 No comments:

Britain really doesn't do snow well. We are in the grip of 'The Beast from the East', which has resulted in four inches of snow. The country is in lock down and there is only one topic of conversation. In fact, driving to work on Wednesday was slow and unpleasant. On Thursday I walked six miles instead, getting in late. But many people remained at home and the day was quiet.

On both nights we drank blackcurrant wine and I think deserve some congratulations for not finishing it as soon as it was opened. It is very drinkable and goes down like pop.

What better to go with fish pie than a bottle of elderflower wine? Quite a lot, it turns out. The first taste was on the verge of rancid. However, it improved dramatically for being left in the fridge: maybe exposure to oxygen helped (though that sounds implausible).

On Friday night when drinking this, a loveable character in The Archers was killed off through sepsis, and I found myself surprisingly affected. I spent the evening feeling low.

My two glasses on Saturday were after a chamber music concert in Todmorden. The concert itself was good - Dvorak's serenade for wind, cello and bass, and the Strauss Serenade Opus 7 - but it took me nearly two hours to get there. And rather than thanking me for making the effort (or even greeting me with a quick 'hello'), all the conductor said to me during the evening was "Could you help me shift the piano?". I won't be returning.

This really was an excellent bottle of wine. It had a true white wine taste with only a hint of Eastern Promise. We drank it in anticipation of a rose bed - I spent a couple of hours in the back garden, removing more of our lawn. Eventually we will have arches covered in rambling roses. Right now we have a kidney-shaped patch of earth.

Whilst Claire and I were drinking this bottle, Rachael and family were having a very different experience. A shop literally round the corner from her in Leicester exploded, killing five people. Rachael is fine if rattled. She heard a tremendous bang. A split-second later her house shook and a few minutes after that the police came round, insisting she evacuate. Terrible, yet vicariously exciting.