Our crab apple tree back at 14 Carr Manor Mount was less than eight feet tall. It produced many pounds of fruit, virtually all of it within easy picking range. The lowest hanging apples on the apple tree at Bentcliffe Drive are higher than 8 foot from the ground. This makes picking them a challenge. Claire had mentioned that she had some success pulling apples off by snagging them with the teeth of a rake. Even with this knowledge, I needed a step ladder.


On Sunday, 16th October, shortly after a heavy downpour, I set up the ladder under the tree and looked over to Claire through the kitchen window. She was shaking her head. On going inside, it was pointed out to me in no uncertain terms that this was a foolhardy endeavour and I would probably break something. Not being one to give up on wine-making opportunities lightly, or to take good advice, I promised that I would be careful, that I would only go two steps up the ladder and that everything would be fine. And (for once) I was right.


The apples took some tugging and the rake often got caught in branches, but I managed to repeat Newton's gravity experiment several times over, being careful to spot where each apple plummeted. I managed to get four pounds of apples, enough for a single batch, and decided not to push my luck by going for twice this amount. 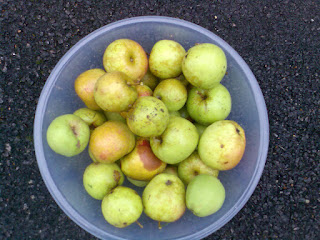 I have used exactly the same recipe as my crab apple wine on the basis that my past 'pure' apple wines have been disappointing. First task was to chop the apples into pieces and then whiz them through the food processor, using the 'slice' attachment. These went into the bucket, along with a pound of minced sultanas (again using the food processor) and three pounds of sugar. I covered all this with 7 pints of boiling water. 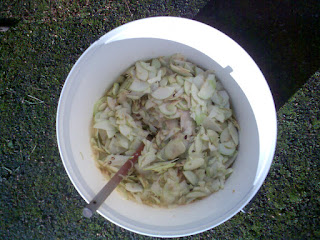 By Sunday night the liquid was cool enough to add the yeast and a teaspoon each of nutrient and pectolase. I strained the wine into its demijohns on Thursday night, 20th October. This was a quick job and entirely uneventful. Probably I could have cut down the water by half a pint. The wine is light brown (always an attractive colour for wine) and I anticipate a massive sediment. 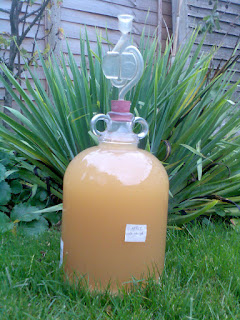 If you want to see how this wine turned out, click here.
Posted by Ben Hardy at 16:41 No comments:

We needed to drink something rather better than the Vanilla Wine just finished on Thursday night. Pretty much any bottle would have done, but I pulled out a 'Prune & Parsnip' from under the stairs. We were officially 'on holiday', having taken Friday off work to go to Keith & Jaki's renewal of their marriage vows, so opening a second bottle on a Thursday night wasn't that scandalous. And in comparison to Vanilla, it is Nectar of the Gods.

We finished the bottle tonight, Sunday, while watching Sandi Toksvig's first episode of presenting QI. She is rather good and Stephen Fry will be less missed than I had imagined.

On the basis it was a Tuesday, I decided to open something nasty. We hardly ever drink on a Tuesday night, so something to discourage drinking seemed appropriate. Vanilla wine really isn't very good. Claire says that it is exactly on the borderline of "undrinkable". We still managed to finish the bottle. It joins the growing list of "Wines never to make again".

Today has been one of those non-descript days where in its closing hours you wonder if it could have been better spent. Claire has been morose all day, except for the evening, because she isn't sleeping well. Next door has some sort of extractor fan which we can hear in our bedroom and which has started going off in two second bursts every 10-15 minutes through the night. I have managed to sleep through it, but Claire has not. A bottle of Christmas Tutti Fruti helped perk her up. It is delicious, with its deep fruit flavours.

News Flash. Claire has, just this second, handed me a plate of cakes, one of which is mostly made from spinach!

Orange wine is a reliable mid-week bottle ideal for sipping slowly while watching the Bake Off. This week, though, the bottle hung round until Saturday night, which is unusual. On Thursday I didn't have any because I was playing trios at Pat and Peter's. On Friday I didn't have any because it was Book Group at Gina's (Remarkable Creatures by Tracy Chevalier which I enjoyed but was not universally popular). On Saturday I didn't have any (apart from two stolen sips) because I had had a boozy lunch with Rodney at The Mustard Pot. Even though I did not have my fair share of this wine, it was a decent bottle of orange - sharp but not bitter.

I had the absolute pleasure of sharing this bottle of wine with Claire and Sue in St Dogmaels. Claire and I travelled all the way to Pembrokeshire to play in Haydn's Creation, but having missed the Abbey Shakespeare this year, it was alson an excuse to see Sue.

We had a glorious weekend; Sunday morning found us at Poppit Sands in warm October sunlight. Most of the time was taken up with playing - it is wonderful music, though the conductor commented audibly on imperfections during the performance and twice clapped the beat for several bars. Saturday night, though, was a relaxed affair, talking non-stop with Sue and drinking this rather decent vintage of elderberry wine. It has a semi-sweet distinctive taste and it is one that will age well.

Hurrah! I am on holiday (sort of). Friday will involve a long drive to Pembrokeshire, which is an official day off work. Thursday was my unofficial day, when I went to London for a conference - and going to London, even if it is work-related, is always a little bit exciting. I managed 15 minutes in Tate Modern as my tourist treat.

As an anticipatory celebration I opened a bottle of crab apple wine on Wednesday - after baking a banana cake - and had my fair share of each, leaving Claire to polish off the bottle as I returned from the Capital.

I was the chef on Sunday. My toad-in-the-hole is a thing of beauty. Okay, I exaggerate a little, but it was good and I think my onion gravy was the best I have done. Topping it all off with blackcurrant wine was almost an excess of delights.

The day was a pleasant, unmemorable Sunday. Most excitingly we bought a new garden rake. Otherwise, we explored south and east of our neighbourhood, I got some documents certified and I put myself in a bad mood by practising the first movement of Brahms' Third Symphony. So, literally, a thrill a minute.

The final bottle of this ginger wine was smoother than my memory of previous bottles. It was still too sweet but there was no near-bitter bite - and that is a good thing. This is another flavour where age improves things (its vintage is November 2012).

We drank the first half of the bottle while watching Bake Off in our pyjamas. While coming downstairs, dressed in my night attire, anticipating cosy television and a glass of ginger wine, I was struck by how lucky I have been. This scenario sounds like the epitome of middle-aged and middle-class dullness. But the cap fits. At that moment, there was nowhere that I would have preferred to be. The ginger wine could have been a little drier, though.

Email ThisBlogThis!Share to TwitterShare to FacebookShare to Pinterest
Labels: Ginger, television, The Great British Bake Off

Autumn is upon us. I can tell this because we had a roast chicken. Food should be seasonal, and a roast Sunday dinner marks the drawing in of nights. A bottle of rose petal wine, particularly one as tasty as this, was the perfect accompaniment. It has a fragrant taste and is the correct level of dryness. As was the day itself. I spent some of it in the sunshine picking elderberries, much of it in our dining room stripping the same off their stalks, and a fraction of the rest practising the bassoon. I appear to have volunteered to play a solo at Music Club. That was careless. 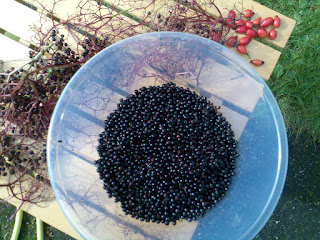 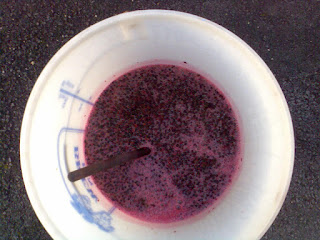 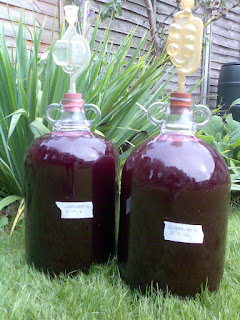