I came back from beers with Matthew to find an open bottle of gooseberry. Now, I had hope to save the final two bottles for several years to see if that would improve things. But Claire made the point that gooseberry was what she both found and fancied, which is fair enough.

Having had three pints of beer, perhaps it was unwise to have a couple of glasses of wine. I am not the most graceful and dextrous people when fully sober. I knocked against the ironing board, on which my (empty) glass rested. It fell to the floor and broke. I normally wouldn't mind; it is only a thing after all; but this was a wedding present from Gill Coop. Damn and Blast.

Today has been the first day this year where I have believed that Spring may eventually come. Being outside, digging on Julia's allotment, has contributed to this feeling. The rhubarb is poking through in our garden, suggesting that more temperate weather is on its way. Claire and I were going to collect horse poo from the local stables to help the rhubarb along, but we spent too long on the allotment to put this plan into action.

Rhubarb wine seemed the natural choice for tonight, and it is a good bottle. There is something substantial to it and I can't describe it more accurately than that. It is a white wine with body and went well with homemade pizza. My favourite variety was the one with roquefort and artichoke hearts. Just lovely.

It is Valentine's Day and therefore something pink was obligatory. I hid Claire's card behind the porridge tin and for the first time in several weeks she did not have porridge for breakfast. I ended up e-mailing her from work to tell her where her card was hidden. It was not quite the spontaneous romantic discovery that I had hoped.

This evening has been aided and abetted by the strawberry wine, which is excellent (he said modestly). Claire's gesture towards romance was to make pudding. That it happended to be tapioca which was "Best Before 2001" only detracted slightly.

I opened this bottle such a long time ago - five days - that I can barely remember what I was doing or why I chose orange. It definitely went with a Vietnamese chicken salad and I think I spent most the day making Prune & Parsnip wine, but otherwise my mind is a blank. Since then the wine has stayed in the fridge whilst we have been getting on with our week, though I suspect Claire had some on Tuesday night whilst I was out in Ilkley playing wind quintets.

We have finished the bottle tonight while listening to the News Quiz and waiting for various root vegetables to roast in the oven. Which is how Valentine's Evening should be spent.

After having my teeth scraped, polished and cleaned at the dentists, I went in search of parsnips. Noshis, our usual fruit & veg place, was closed and the next nearest shop had vegetables one stage away from the compost heap, so I resorted to Morrisons, which is an unlovely supermarket. They had prunes and parsnips aplenty, so I bought half a kilo of the former and four pounds of the latter. 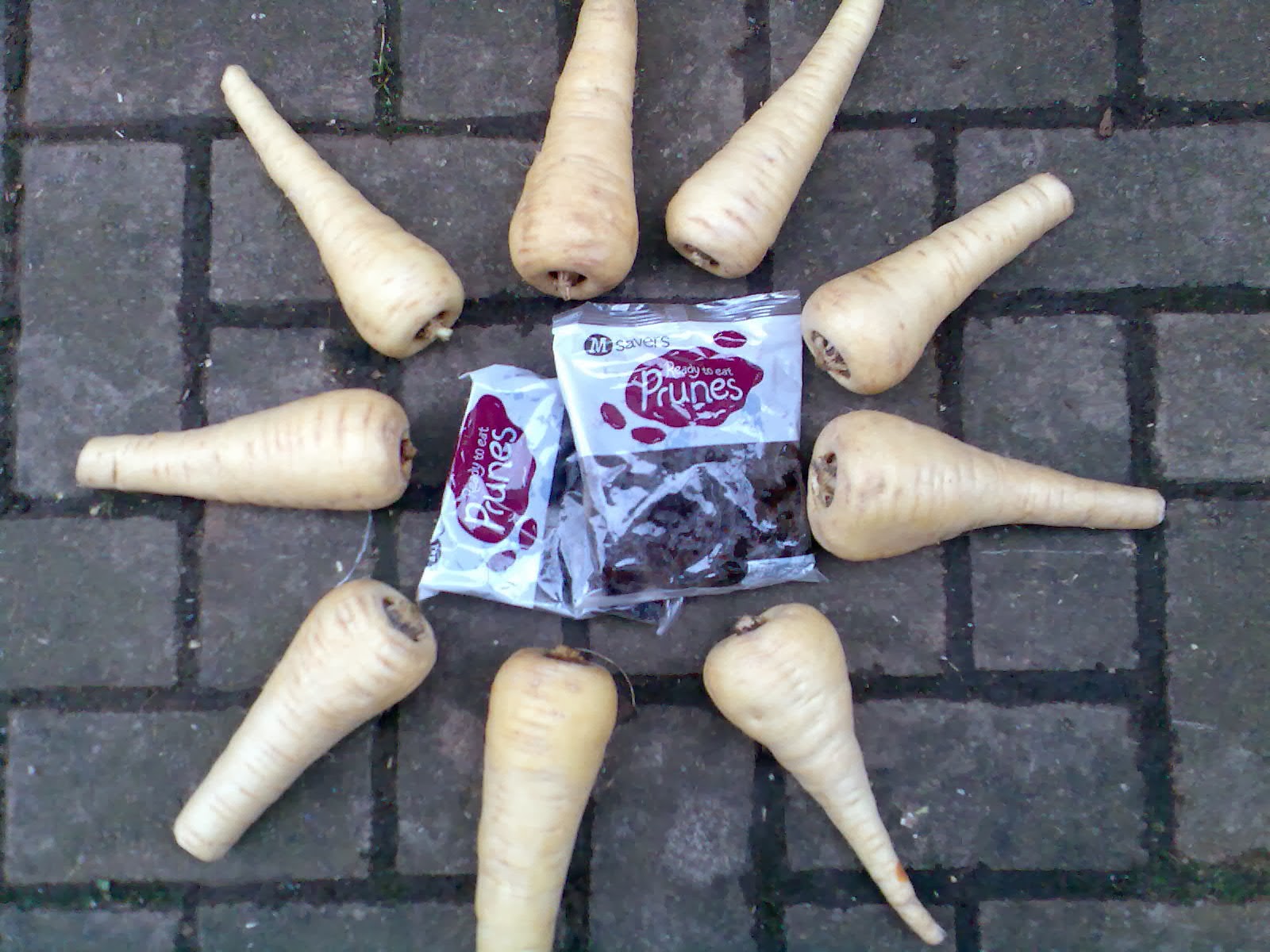 The remainder of the weekend was busy with Music Club, walking in the Howardian Hills and ploughing through The Rainbow (which involved much gnashing of teeth), so I put the parsnips in our coal shed and retrieved them on Saturday 8th February.

I cut the parsnips into small pieces, covered them in our largest pan with eight pints of water and let them stand for a couple of hours whilst I did other wine-making things - mostly rinsing and sterilising bottles for redcurrant wine. 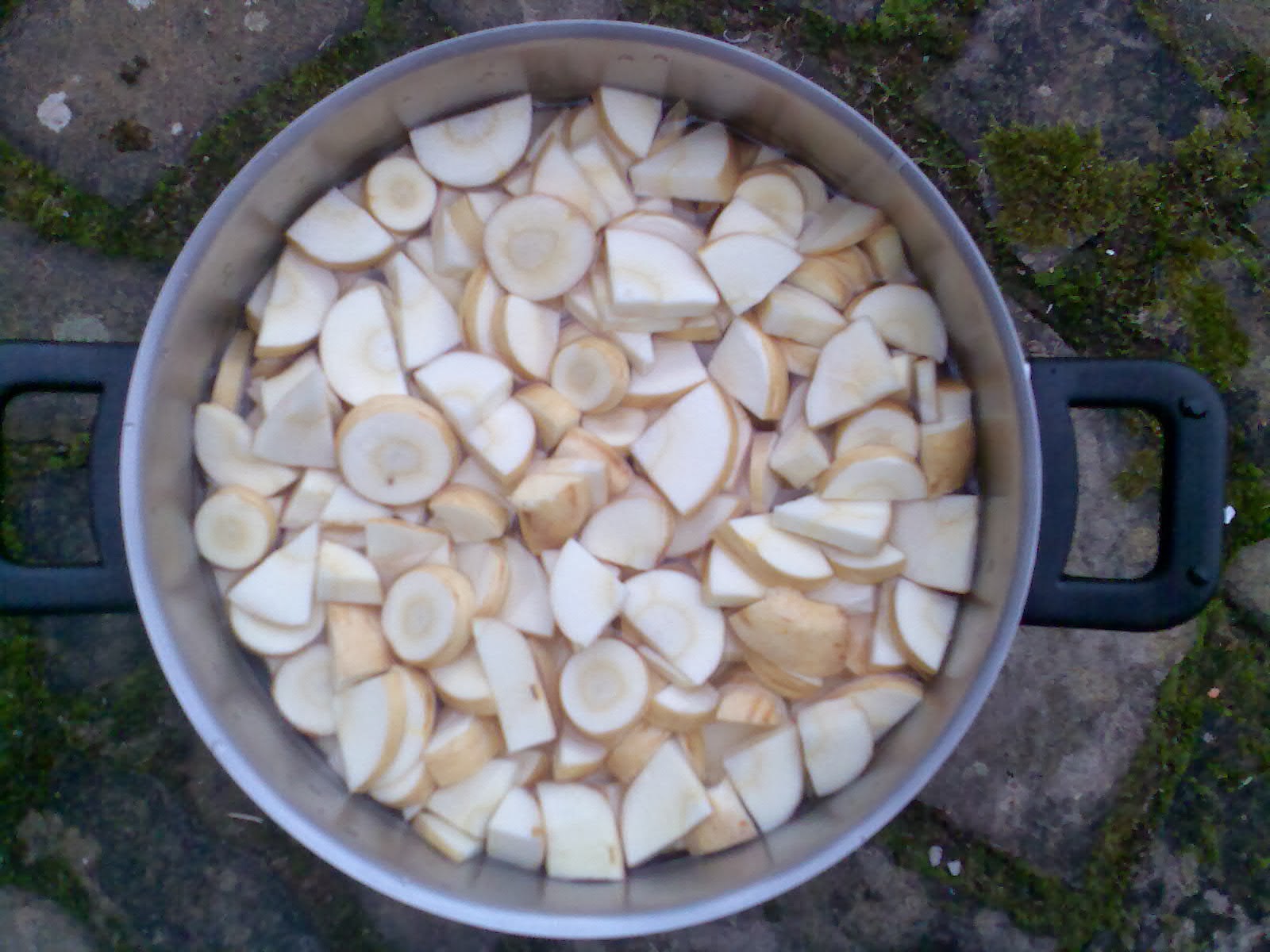 I chopped each of the prunes into three or four pieces and put these in my bucket with 5 lbs 12 oz sugar. This is a touch less sugar than previous years and I do not know how much difference it will make. I brought the pan containing the parsnips to the boil and boiled them for twenty minutes. By this time the parsnips were soft and had lost much of their flavour. I poured the liquid over the prunes and sugar and discarded the parsnips. I boiled another seven pints of water and pourd this into the bucket too.

On Sunday morning I added the yeast and a teaspoon each of nutrient and pectolase. My recipe says I should also put in some amylase, but I have run out. If the wine hasn't cleared by racking I will buy a jar and put a teaspoon in then. 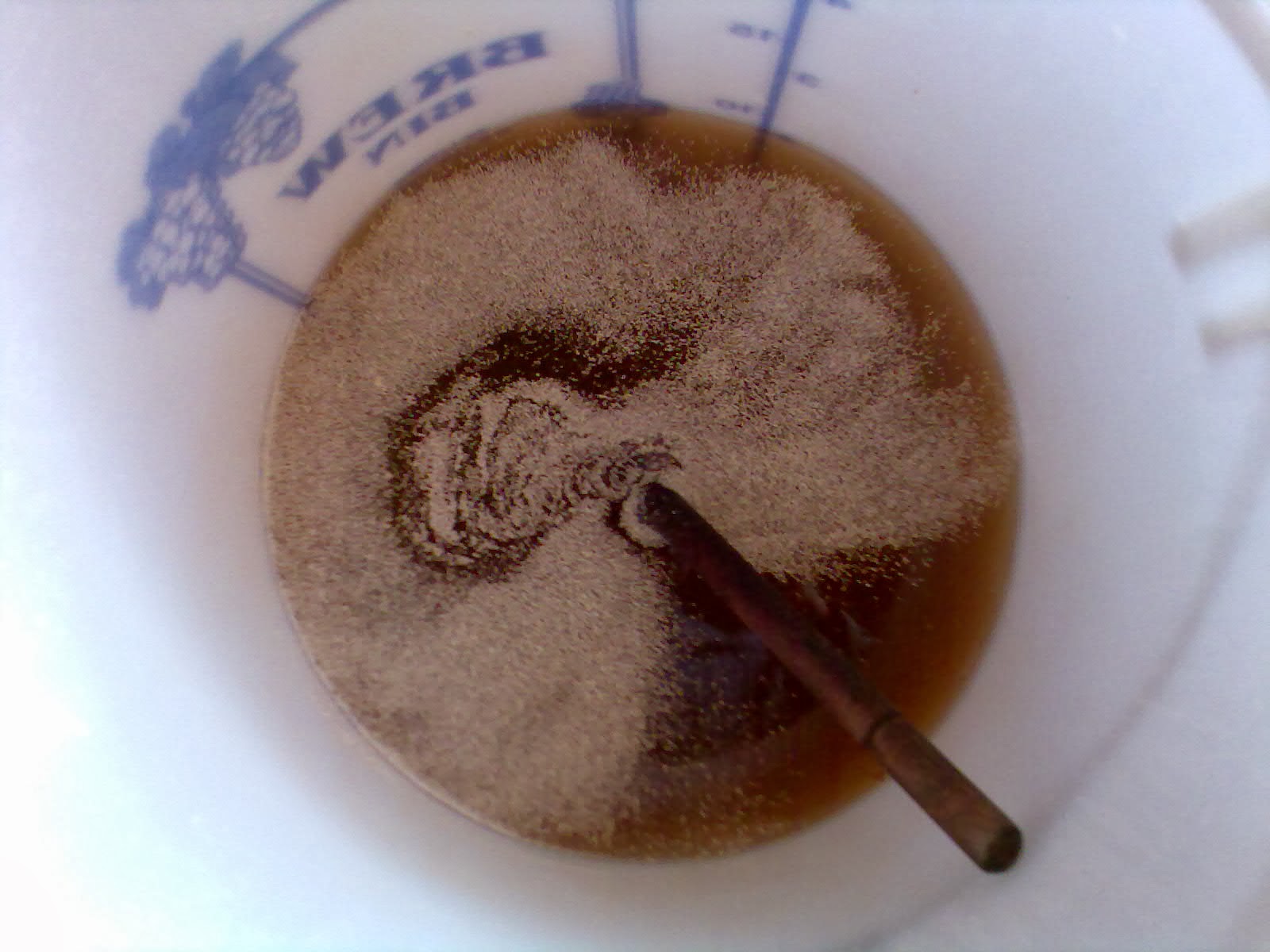 I left this until Thursday, 13 February, before sieving out the prunes and putting the liquid into its demijohns. This was a longer, stickier process than I had anticipated, and it looks like there will be a large amount of sludge at the bottom. I could have used about another pint of water. As usual, this is my brownest of wines. 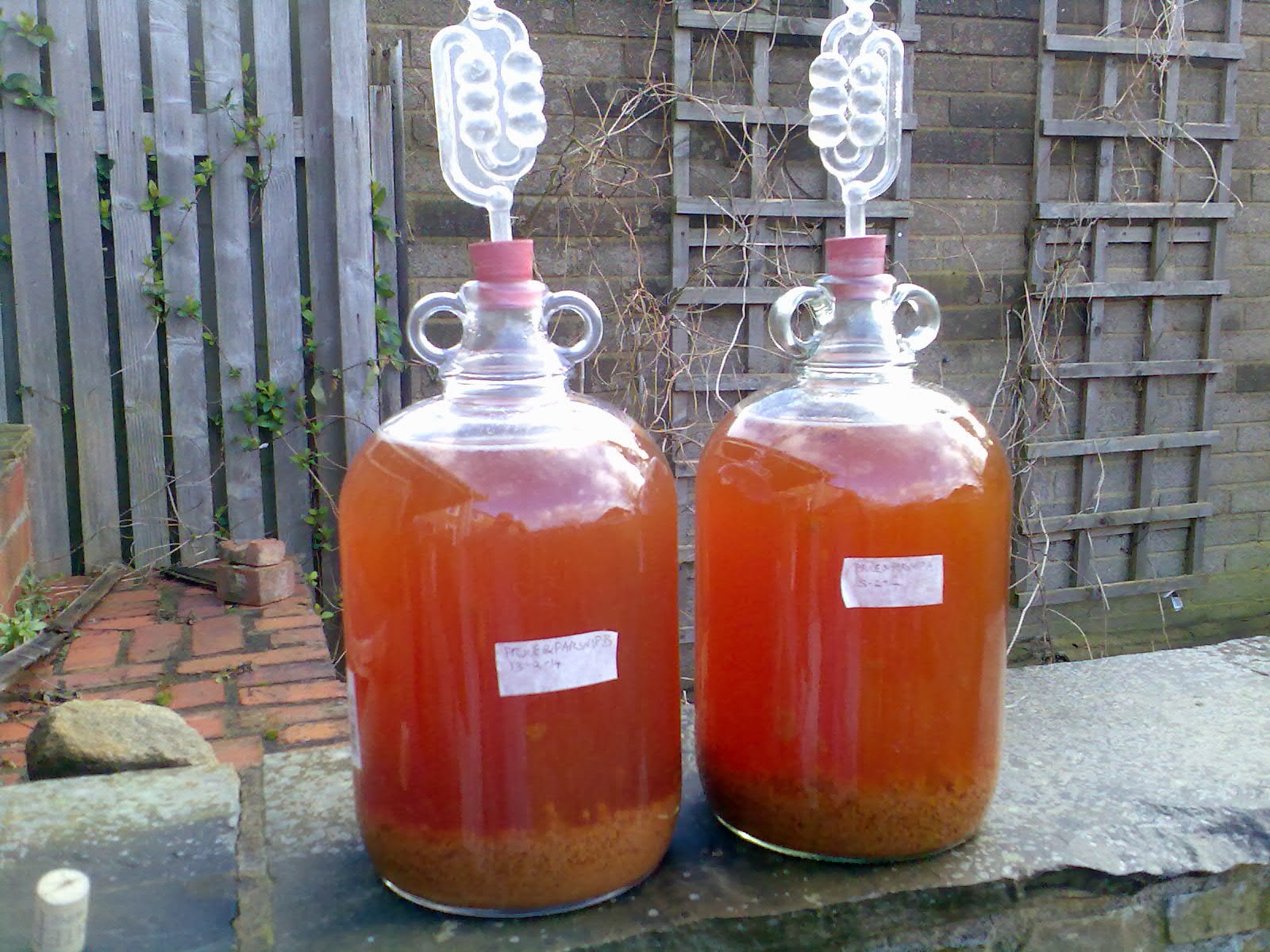 If you want to see how this wine turned out, click here
Posted by Ben Hardy at 14:44 No comments:

We had not planned to open this bottle, let alone finish it. The spare redcurrant from its bottling and the remainder of the Exotic Tinned Fruit were meant to be enough. However, it was a Saturday night and all that had gone, before we were even half way through our evening meal (which, unusually for a Saturday, was a roast chicken). So we unashamedly opened the blackberry and by the time we had finished watching Doctor Who on DVD it was gone. Partly this was pure greed, but also it is a very drinkable bottle which slips down nicely and too easily.

Now that January has passed we can drink mid-week again. In fact, I paid less than lip-service to this rule, but Claire stuck to it. Therefore, this bottle was our first post-WYSO bottle of 2014. It has taken several days to finish, but that is not a comment on its quality. This wine is on the bland side of fine, with only a hint of exotic about it. It is more a comment on not having had a free evening. On Thursday I was coming back from April's funeral in Reading, which was emotionally very tough though I am extremely pleased I went. Friday was Book Group, where I rarely impose my wine. We were discussing The Rainbow, which I found tedious - too much thrusting and fecundity and far too little plot or dialogue. The wine was finished tonight, Saturday, as a prelude to roast chicken and an entire bottle of Blackberry.

This is an excellent batch of Prune & Parsnip. It is golden in colour and sweet in taste, though far from cloying. I don't know if I have made better. Looking back at the 2012 batch I see that the first bottle of that was the best, and maybe therefore this is one to drink young.

We drank most of the bottle on Sunday after a day out walking round the Castle Howard estate, eating an oxtail stew wrapped in a giant Yorkshire pudding and losing to my mother at Scrabble. Her first word was 'Theatre' and I never caught up from there.

Today's glass was drunk after spending much of the day visiting Stonebridge's sites. At one I had to tell a car salesman that he was selling cars from land that we own. Fortunately we are happy with the status quo and he wasn't at all aggressive. Rather lovely, actually. But I was nervous starting the conversation.

If you want to see how I made this wine, click here.
Posted by Ben Hardy at 18:36 No comments:

I had the lion's share of this bottle. It was a post-Music Club event, and a Music Club where I played a Beethoven Trio with Pat & Peter. Earlier in the day I had suggested to Claire that I put two bottles to one side - something nice and something nasty - and we could open the one which best suited the performance. Claire, reasonably, questioned why she should be punished twice.

In fact, the performance went as well as it ever realistically was going to go, so I came away pleased. Lots of people said nice things about it. Therefore I think I was justified in drinking more of this than was strictly fair. It is an excellent bottle of wine - one of my very best.

I had a shopping disaster on Sunday. Buying clothes is tedious at the best of times, but on Sunday at least I knew I needed a set of winter pyjamas. Going in with a plan makes the shopping experience all the more bearable. Marks & Spencers was bound to have what I wanted. Except all but one pair of pyjamas were of the thin cotton variety. Why do shops insist on being at least a season ahead? Anyway, the one design they had looked a little similar to Claire's night attire. I could live with that, so bought them. When I got home and did the comparison, I found Claire's pyjamas were Exactly The Same. We will look like Tweedledum and Tweedledee and if anyone ever sees us wearing our pyjamas together, I would have no option but to kill them.

We drank the blackberry wine mostly to forget.