It has been a lazy, sunny Sunday rounded off by a bottle of Prune & Parsnip wine. Mostly I have spent my time in the garden doing things. One of those things was planting seeds: courgettes, beetroot and runner beans. Having just spent the week playing in the pit orchestra for Into the Woods, I will be disappointed if the beans do not produce a giant beanstalk running up to the sky within 24 hours.

The wine was, as ever, sherry-like and sent me to sleep.

A small glass of this wine was my first alcohol for eight days. I don't think I have gone that long without drinking since my 20s. This week I have been playing in the pit orchestra for Into the Woods every evening, which has meant not getting home until shortly before 11. Hence being alcohol free - and I am relieved that I didn't really miss it.

The occasion of my glass from this bottle as a street party where everyone was encouraged to bring food and drink. The road was closed at both ends and the neighbourhood children played in the highway. It was an excellent occasion made all the better by fabulous weather. I pretended the party had nothing to do with Harry & Megan.

I took this bottle to Dorset with me as my 'Comedy Wine'. Rather than pouring eight glasses, one for everyone, I poured one glass instead and everyone had a sip. That was all anyone could face and this one glass was not finished. Richard said that it reminded him of something he might find in the garage, and it was agreed that it had an air of brush-cleaner to it. Overall, not a success. My fish pie, on the other hand, was a triumph.

I have been later than usual in my May wine-making, but it has been a busy month. The first part was taken up with a glorious holiday in Dorset where we hunted for ammonites, basked in sunshine and walked ten miles a day. As soon as we were back in Leeds I had a week of playing in the pit orchestra for Into the Woods. This was less exhausting than I had anticipated, but I was out of the house from before 8 in the morning to nearly 11 at night, leaving no time for making wine. My plans to make dandelion wine were crushed and I didn't start my rhubarb wine until 20th May, the day that Nick came round with 9 lbs of rhubarb. He will get two bottles of the finished product in payment.

There were two varieties of rhubarb, one pinker than the other, and Nick provided more of the pink than green for purposes of colour. 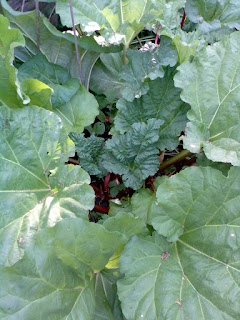 After spending the day in the garden (we are having glorious weather) I went into wine-making mode. I washed the rhubarb and sliced the stalks thinly. These all went into my bucket and I measured and poured over 9 lbs of sugar. I boiled 20 pints of water (though that proved to be at least a pint too much) and poured this onto the rhubarb and sugar. (Rhubarb wine is really the easiest wine there is, and I think it is my favourite white.) I stirred it all up and left the mix overnight to cool down.

On Monday morning before work I added the yeast and two teaspoons each of nutrient and pectolase. Apart from the occasional stir, I left this until Friday evening, 25th May. Fortified with a Margherita (delicious) and a glass of zucchini wine (rather less so), I transferred the wine into its three demijohns. The first stage was to remove the majority of the rhubarb with a colander, used as a scoop. I then dipped my jug into the bucket, poured the wine through a nylon sieve and funnel into the demijohns. It was a quicker process than I had expected and the wine is the pastel pink that rhubarb wine should be. 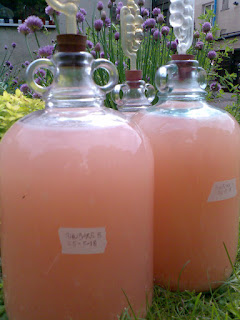 If you want to see how this wine turned out, click here.
Posted by Ben Hardy at 19:36 No comments:

I decided that our holiday in Dorset would be a suitable occasion on which to open the first bottle of rhubarb wine. This was to accompany a pork, ginger & rhubarb stir-fry, made by Nick (who supplied the rhubarb for this wine). The general consensus was that this is a rather decent white wine, and possibly the best of the holiday.

We had an excellent day before the wine, walking around Cerne Abbas and its hillside chalk giant. The village is impossibly beautiful - the sort of village I thought only existed in films. The giant is intriguing - a rampant masculine figure that can only be viewed from the other side of the valley. In the evening I named my gin & tonic 'The Cerne Abbas Giant' on account of it being large and stiff.

This bottle of wine was converted into a cocktail, which I named 'Ben's Surprise', the surprise being that it was better than drinkable. Into each of nine glasses I put a dessert spoon of pureed strawberries, then equal measures of strawberry wine and prosecco, followed by a garnish of chopped strawberries. It has been inspired by a cocktail Rachel drank at lunchtime in Hix's Fish & Oyster House. A proper summery drink and an entirely suitable use of strawberry wine.

English bank holiday Mondays are meant to be cold and grey and miserable. It is tradition. This one hadn't got the memo. It has been properly hot. Just the sort of day to go on a 10 mile walk, climb Dorset's highest peak (Golden Cap) and stare out over a turquoise-blue sea.

Ann cooked shepherd's pie (obviously a warm weather meal) and I opened a bottle of elderberry. Everyone admitted, on pressing, that they thought this wine was Very Good. Rightly so.

The weather was glorious today in Dorset, where we are holidaying. It is comfortably warm to sit outside in the evening and at Rachel's request I assembled the nine of us outdoors and poured this bottle of rose petal. Rachel had set expectations high, only to have them destroyed on first sip. The rose taste was subtle to the point of non-existence and there was a bitter secondary taste behind it. Wendy and Sooz both said they liked it, but I think they were being kind.

After driving for 7 hours, covering 270 miles, I deserved a drink and, in fact, had many. At least one of those was a glass of ginger wine. We are on holiday on the Jurassic Coast and staying in a fabulous holiday home - Mulberry Cottage in Uplyme, Devon. The weather forecast for the week is promising and sitting with friends drinking too much wine is an excellent way to start a holiday. Though the drive was tedious, it is good to have arrived and this wine was enjoyed by all. 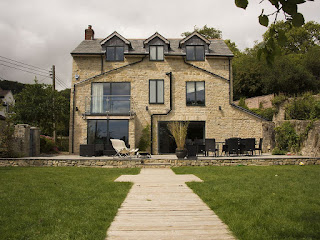 We are on holiday! Only just - the long drive to Dorset happens tomorrow - but On Holiday nonetheless. To celebrate, I voted in local elections and mowed the lawn. More traditional forms of celebration included getting takeaway curry and opening this bottle of Blackcurrant & Gooseberry. Both wine and curry were excellent - this sharp wine has more than one note to it, and is easy to drink. I haven't been on holiday properly since Corfu in October last year. Dorset may not be as exotic but I am looking forward to it tremendously.

Chocolate and rhubarb wine is not a good mix. I was disappointed with my first glass: it had the taste of a wine that had aged badly; sour and musty. Claire said she had not picked this up. My second glass was far better and I can only put this down to not having had a mouthful of chocolate immediately before it.

The food we ate was curry (of the bean variety) with fabulous yoghurt pancakes. It all made my eyes water, though. I have a large mouth ulcer on my top lip, which makes eating hot food painful. Claire insisted I take some paracetamol - thinking it unreasonable that her cooking should make me cry.

We ate mushroom and evil sausage pizza while drinking this wine. The sausage was outrageously spicy and one of those that starts sedately but then explodes into hotness in your mouth. It was fabulous. Rose Petal Wine went well with it - the flavour is distinct enough to hold its own.

Our evening continued in front of the stove watching Primary Colors - a film I had wanted to see when it came out in 1998. It was a thinly veiled exposé of Bill Clinton's rise to power, and brilliantly done. The acting was mostly superb and it raised interesting questions about corruption, politics and whether lying and cheating for the greater good can be justified.

Claire is massively busy at work. Every afternoon I get a text from her saying that she will be late. This week has been particularly fraught, to the extent that she missed WYSO. It is a good thing that she finds the work interesting and rewarding.

On Tuesday Claire asked, on coming through the door, what wine we were having and chose this from the options I presented. Prune & Parsnip is a good all-purpose white. It goes with anything and can be drunk on its own. On this occasion it went with left-over lamb curry and pilau rice.