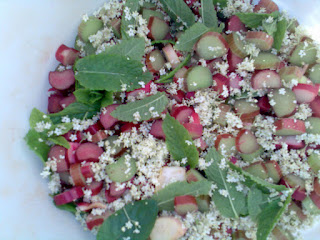 I have made Rhubarb & Elderflower wine at least twice before. This year I am experimenting by adding mint into the cauldron. It could be delicious and it may be disgusting, but I would never know without giving it a try.

It has been a lovely early summer day today, 7th June. At times the sky has been cloudless and a deep June blue. I am still in just a T-shirt and it has gone eight. This morning, shortly after 10, Sooz and I set off to find elderflowers. It is early in the season and many trees are only indicating that they might one-day bloom. However, we found several trees in the two open green areas that straddle Potternewton Lane that had at least some clusters of elderflowers. Between us we picked about a third of a carrier bag full, and this was plenty for both this wine and Sooz's 'Dark & Lonely Water' flavoured vodka.

Once Sooz was safely on a train to Newcastle I picked and chopped 2 lbs 12 oz rhubarb from our garden - making sure a good deal came from Shirley's plant for its colour. I then stripped elderflowers to make up three-quarters of a pint of blossom. As ever this was tedious, to the extent that I have decided not to make pure elderflower wine this year - which must be the first time in about eight years that I have not. The stripping process was helped along by Charlotte Green on Classic FM and a Dum-Tee-Dum podcast.

I picked a handful of mint from our garden, concentrating on one variety, but putting at least a leaf in from three others, washed it and put the leaves into the bucket with the rhubarb and elderflowers. I added 3 lbs sugar and boiled 6½ pints of water. When the water hit the ingredients there was a wonderful minty smell and though I only put in a small(ish) amount of mint, I fear this may dominate the flavour.
I put in one teaspoon of nutrient and tannin (and possibly pectolase, but I don't remember) together with the yeast the same night. On Thursday evening, 11th June, this went into its demijohn. There was not quite enough liquid, but it was within half a pint. The wine's colour is a dark pint, and I could definitely taste the mint when I had a sip. I'm actually quite excited by this wine. 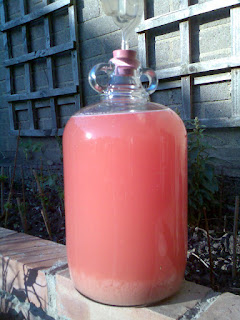 If you want to see how this wine turned out, click here
Posted by Ben Hardy at 17:39