I thought I had missed the dandelions this year. Generally dandelion wine is one to make in April. Today is 11th May. However, we suffered the coldest April in decades, meaning everything is late flowering. Walking through Gloucestershire fields last week, it became apparent that the dandelions were just hitting their peak, meaning there would be no problem getting enough 100 miles north in Leeds. I mentioned my quest for dandelions to Julia when discussing relieving her of several rhubarb stalks and she told me there were plenty of them surrounding her allotment. I would be doing her a favour to take as many as I needed before they turned into clocks. 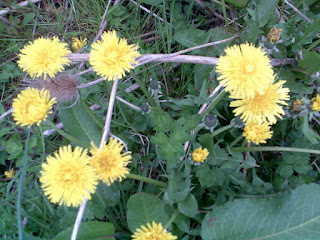 The weather this Sunday afternoon was not ideal for picking dandelions. Generally one wants bright sunshine so that the flowers are fully open. Instead my only choice was drizzle. The dandelions were mostly three-quarters open, and this was good enough. I took a measuring jug and plastic bag with me and collected six pints of flowers, which was about half an hour's work.

Back at home I put all the dandelions in a bucket and collected a handful more from our back garden. I poured over 7 pints of boiling water and I am now meant to let them sit until Tuesday. My timetable does not allow for that, so I will do the next stage late on Monday night instead.

I arrived back from Airedale at 10:15 p.m. already tired and set to work. The dandelions and liquid were poured into the big pan and set to boil. This revealed several blades of grass and a slug. It was a very small slug, but a slug nonetheless. I removed it and will pretend I did not see it.

I sliced thin peel off two lemons and an orange and put these peelings in the pan. Three pounds of sugar went in and I boiled it all for ten minutes. Meanwhile I minced a pound of raisins and juiced the citrus fruit, and these ingredients went into the (slug-free) bucket. I poured over the pan contents and left it over night (during which I slept remarkably badly). On Tuesday morning I added the yeast and a teaspoon each of nutrient, pectolase and tannin. I put this into its demijohn on Friday, 17th May. It is remarkably brown, but smells fabulous.
If you want to see how this wine turned out, click here
Posted by Ben Hardy at 10:37