Whitecurrant Wine - The Making Of ...

Whitecurrants are misnamed. Beigecurrants would be the more accurate description. But I am pleased that this misnomer exists, because it means I get to tick the letter 'W' off my alphabet of wine. When Julia mentioned her whitecurrant bushes looked promising this year, my ears pricked up for this reason. On hearing that they needed netting to defeat the birds, I drove to her allotment as quickly as residential speed limits would allow. Then I made space in a busy Saturday, 20th July, to go and pick them. 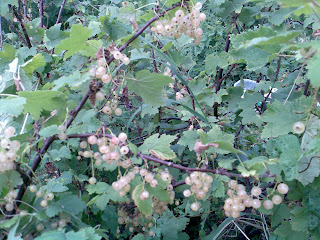 Whitecurrants are more difficult to pick that their red siblings. The bushes are lower, which involved crouching and sitting and getting badly stung by nettles. Several hours later my hands were still throbbing. The fruit grows in strings, hanging below the branches and, as with redcurrants, I picked the fruit on their stems, and made no effort to remove the greenery.

I came away from the allotment with 2 lbs 15¼ oz of whitecurrants. The recipe calls for 3 lbs, and I looked on my harvesting as 'Efficient' rather than 'Three Quarters of an Ounce Short'. 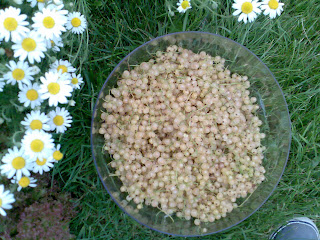 I washed the currants on Sunday 21st July, put them in their bucket and crushed them. I dissolved 2 lbs 12oz sugar in six pints of water, brought this to the boil and poured it over the fruit. On Monday morning I added the yeast and a teaspoon each of nutrient and pectolase.

I sieved out the currants on Friday 26th July and put the liquid into its demijohn. The amount of water was spot on. This, I think, is the palest wine I have made. I hope this does not translate into a dull flavour. 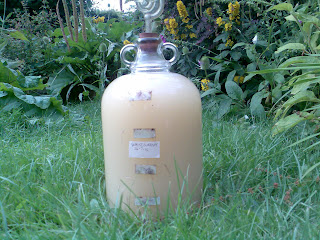 If you want to see how this wine turned out, click here.
Posted by Ben Hardy at 12:21