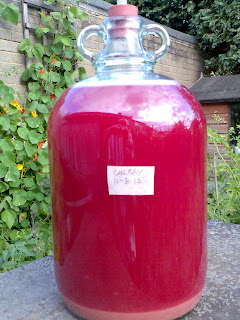 Cherry Wine was never on my list of 'To Dos'. I could not imagine getting enough cherries. Anyone I know with a cherry tree complains that when the fruit is ripe a whirlwind of feathers descend and the birds steal every cherry. However, the summer of 2013 will be spoken of with reverence for years to come as the period of bountiful soft fruit. 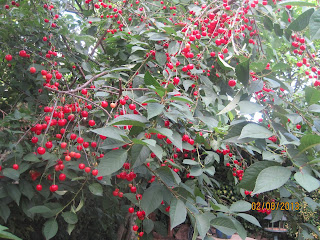 Mom rang on Saturday to say that Susan Craig had picked twenty pounds of cherries from her tree and did not want to see them go to waste. I checked my recipe books and found three cherry wine recipes. Two of these required the cherries to be stoned, but one did not and therefore the choice was made. It requires six pounds of fruit, and stoning this amount would have been tedious in the extreme. Removing the stalks was bad enough.

The cherries that Susan brought round were ripe and on the verge of going over. I weighed out six pounds, leaving the remainder (two-and-a-half pounds) for cherry brandy and jam. These were washed and I crushed them with a potato masher in the bucket. I had not expected as much juice as they produced and in retrospect I think I have added too much water. C J J Berry's  recipe called for eight pints, but I boiled six and a half instead and poured this over the mashed cherries. This was all done on Sunday, 4th August.

On Tuesday evening, 6th August, I strained the liquid into my biggest pan, throwing out the cherry flesh, skin and stones, and brought this to the boil with the lid off. When it reached violent bubbles I poured the liquid over three pounds of sugar - which is a pound less than dictated by C J J Berry. Four pounds of sugar would be ridiculous. I put in the sachet of yeast and a teaspoon each of nutrient, citric acid and pectolase the following morning.

In my preparations for putting this into its demijohn on Sunday, 11th August, I broke a brown glass demijohn, which caused much cursing. After sterilising it, I added boiling water and heard an unmistakable crack. This is irritating. I am running out of demijohns - they are all full - and only have one unbroken brown one left, currently housing rhubarb wine. Anyway, as suspected, I could have done with at least a pint and a half less water for this flavour, but the colour is a wonderful cherry red. 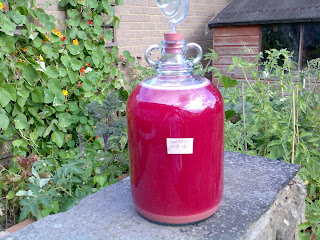 If you want to see how this wine turned out, click here
Posted by Ben Hardy at 13:16