This year has been an amazing one for blackcurrants. I noticed back in May that our three bushes were covered in flowers. Hitherto our blackcurrant harvest has been unimpressive. This year could not be more different. We have already used six and a half pounds and there is probably the same amount again in the freezer. I predict many jars of jam.


I have been picking blackcurrants since late July and there are still some to go. These may be left for the birds, thought I wouldn't want our garden to become a soft fruit restaurant for pigeons.

I started the wine on Sunday, 18th August. Rachel came over with the blackcurrants she had harvested whilst Claire and I were at Rydal, and I supplemented these with those I had picked that day to make the weight up to three pounds. I put them in the bucket and poured over half a pint of boiling water to encourage them to defrost whilst Rachel, Duncan, Claire and I made merry and drank rather too much for a Sunday. 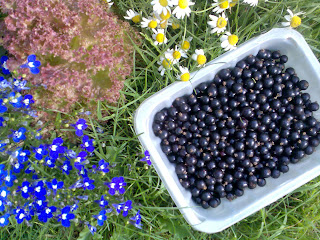 At some point that night, though I now cannot remember precisely when, I mashed the fruit and poured over a boiling syrup made up of three pounds of sugar dissolved in five-and-a-half pints of water. I left it overnight to cool and on Monday morning, setting my alarm 10 minutes early so I could do this and make my sandwiches, I added the yeast and a teaspoon each of pectolase and nutrient. 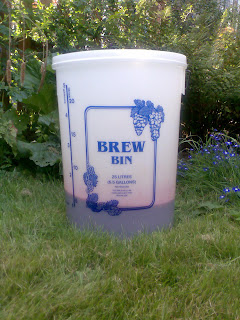 The liquid was strained into the demijohn on Thursday night, 22 August, while listening to a not-as-dull-as-it-sounds documentary about Gibraltar on Radio 4. Apparently cigarette smuggling is big business there. I left a large gap in the demijohn overnight, keeping some wine back in its own bottle. This was wise as the fermentation was initially aggressive. 24 hours later I have filled the demijohn to its neck and the wine's colour is that of a dark claret. 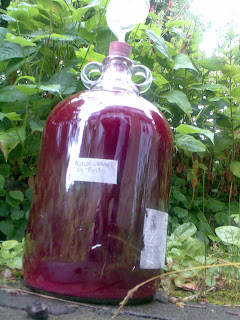 If you want to see how this wine turned out, click here
Posted by Ben Hardy at 12:48