Rhubarb & Elderflower Wine - The Making Of ... 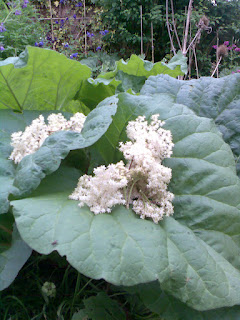 This flavour is another one suggested by Claire. However, I think her motive was to reduce our holding stock of rhubarb in the freezer rather than necessarily inventing an unmissable combination of ingredients. Our various rhubarb patches in the back garden have been prolific this year and do not show any signs of abating. I am hopeful that this means we will be eating pie into July. It won't result in any more wine, though. 'Rhubarb and Elderflower' is likely to be 2012's last wine involving rhubarb (unless it makes it into the Christmas Tutti Fruti).

Today, 2nd June, is on the early side for elderflowers. I have been noticing the odd 'head' on my way to work this week, but little more. Therefore, when I went out foraging this afternoon, I was expecting to be out quite some time. Including the walk to and from the Stonegate playing fields, I was gone about fifteen minutes. This was hardly foraging at its most difficult. All the elderflowers came from one tree, and I collected about one quarter of a small plastic bag full - which on stripping proved to be half a pint's worth of blossom. I used my new 'birthday jug' to measure this. Though I have yet to turn 42, I spotted Claire coming back to the car this morning with a measuring jug. I did not realise she was trying to be surreptitious, so when she announced she had bought me a birthday present I asked if it was the jug. Apparently this has spoiled the surprise, so she has given it to me - unwrapped - twelve days early.
As well as half a pint of elderflowers, this wine also has 3 lbs of rhubarb, 3 lbs of sugar and 7-and-a-quarter pints of boiling water poured over the rest of the ingredients. The rhubarb, being frozen, came to be painfully cold to the touch.
I added the yeast and a teaspoon each of nutrient and pectolase on the rather rainy morning of 3rd June. It was inevitable that the weather for the grandest day of the Queen's Diamond Jubilee Celebration would be mostly drizzle. I left everything in the bucket, stirring twice a day, until Thursday evening, 7th June, which has been another incredibly wet day. I poured the liquid, sieving out the solids, into its demijohn and I have wrapped this in silver foil, to preserve the pink. The wine is not bubbling as frantically as I would like it to, but there is definitely some fermentation going on. 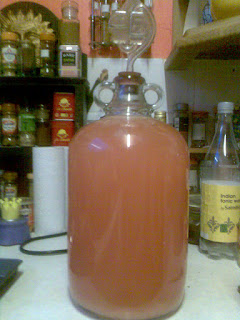