We are only six days into the New Year and already I feel like an old man. My back is aching and I know that I shall be stiff tomorrow. This is the result of barely two hours gardening. All I was doing was shovelling horse manure into bags and then digging it into our front garden, plus some low-level weeding. Gardening is meant to be a healthy activity, so why do I feel like I have been given a thorough pummelling?

The other thing I have done this weekend is to begin my ginger wine. I had already decided that Ginger will be my regular January wine, but the bottle we drank on New Year's Day confirmed this choice - it was excellent. I bought all my 'fruit' ingredients: 5 oz root ginger, 4 lemons and 1 lb sultanas: from the Continental Supermarket in Harehills. Though they sell every type of pulse and flour that you can think of and many more besides, the only sultanas they had were 'Golden Sultanas' which had a best-before date of April 2018. I bought them anyway. It makes this wine the yellowest of all wines that I make. 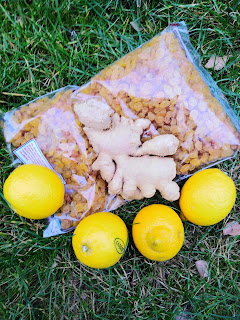 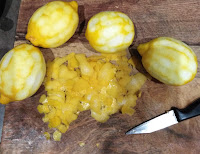 On Saturday (yesterday), I shaved the ginger of its skin and sliced it as thinly as possible before putting it into the bucket. Next I minced the sultanas in the food processor and put those in. Then I peeled the lemon-skin as finely as I could, doing my best to avoid the pith, and put this in, followed shortly by the juice from all lemons. 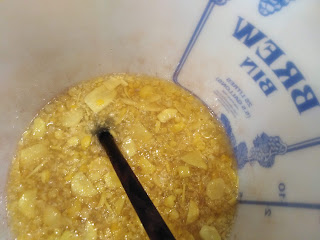 I waited until Friday evening, 11th January, before putting the wine into its demijohn. This was done before Book Group (Treasure Island - our 'winter classic') so I had to be quick. Happily this was not a drawn out process, and I now have a demijohn full of pale yellow, ginger-flavoured liquid. 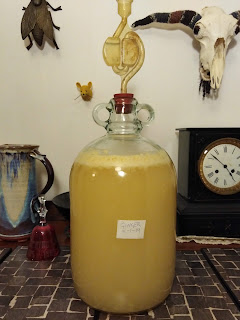 If you want to see how this wine turned out, click here.
Posted by Ben Hardy at 12:05