Several weeks ago I helped Julia net her redcurrants. She thought they looked promising but knew that without a net they would serve only as bird food. This was a wise thing to do. The redcurrants are abundant.

I made arrangements to meet Julia on the allotment this morning, Sunday 14th July. It being fabulous weather - we are getting a proper summer, the first we have had for years - I forsook my beloved Broadcasting House and turned up with Claire at 9:30. Despite the early hour it was already hot and we needed suncream.

The picking was easy. Redcurrants hung off the bush in ruby clusters. I stood in one place and filled a container and then a bag. There was no effort involved. If I thought I was coming to the end of a spot, I only needed to look at a slightly different angle, and a whole new redcurrant seam would be revealed.

I had only intended to make a single batch of wine, but we came away with enough for a double, enough for recurrant jelly and a few more besides. Claire weighed out six pounds while I was out picking strawberries. On my return I washed them and put them in the bucket, without stripping the fruit from their stalks. Crushing the redcurrants took very little time. I boiled twelve pints of water with five-and-a-half pounds of sugar dissolved in it (but in two stages) and poured this over the mix.

On Monday morning I added the yeast and a teaspoon each of pectolase and nutrient. Ordinarily wine takes 24 hours or more to show signs of fermentation. Not in this weather. It is bubbling away happily 12 hours later.

I sieved out the fruit, putting the wine into its demijohns on Thursday 18th July. This was a quicker process than I had feared, and it needed to be. Tonight has been a busy evening - what with rescuing Claire from a house that would not lock and doing a spot of emergency tidying. The wine's colour is a fabulous magenta. 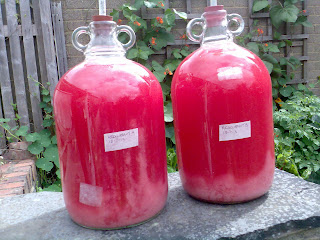 If you want to see how this wine turned out, click here.
Posted by Ben Hardy at 12:20