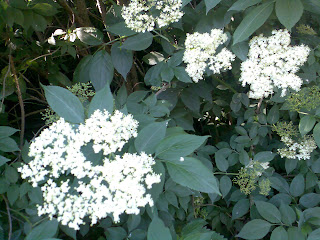 This is the latest I have ever started elderflower wine. It is the last day of June and elder trees are only just in abundant flower. As today threatened (and proved) to be a busy day, I ventured out to the nearby fields at around half past ten to pick elderflowers. I was probably only gone twenty minutes before returning with a bagfull. And this proved to be too many.
Earlier in the week I had experimented with freezing elderflowers to see if this would make stripping them any easier. It did, a little, but the flowers rapidly turned an unattractive brown, so I ditched that as an idea. Yesterday Julia recommended using scissors, and this is the method I chose, hoping it would make the process quicker. My hopes were realised - but barely. And by the end of my session collecting two pints of blossom I became increasingly cavalier about how much stem fell into the measuring jug. Life is sometimes too short to worry about these things. 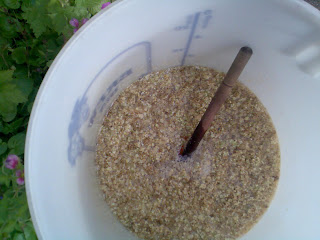 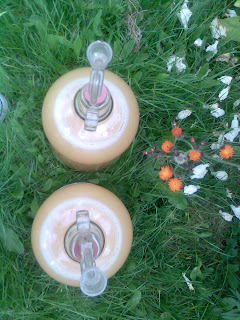 I left the flowers for five hours while Claire and I went to Amy and Darren's to instal a rhubarb plant and eat our own body weight in cheese. On our return I put the flowers into my bucket and added five pounds of sugar, 12 pints of cold water, 2 litres of 'Grape & Peach Juice Drink' - I find it impossible to source unbuggered-about-with white grape juice -, two teaspoons of tannin, one teaspoon of pectolase and two each of crushed camden and vitamin B1 tablets. The camden tablets have a best before date of 2000. I added the yeast and two teaspoons of nutrient the following morning.

Apart from stirring the wine twice a day, I left it until Friday 5th July, at which point I sieved out the flowers, with the liquid going into its two demijohns. This was done while listening to a moving Radio 4 Play, Strike for a Kingdom, about poverty, class and murder in 1926 Wales. Learning my lesson from yesterday's gooseberry, I have left a little room between the liquid and the demijohn's neck to allow for excessive fermentation, and I have kept back some nascent wine for topping up.
If you want to see how this wine turned out, click here.
Posted by Ben Hardy at 17:46