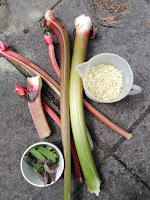 Weather-wise, June has been a terrible month. The last June that I remember being this wet and cold was the year we got married - 1998. It has been continuous grey skies and hardly a dry day. Whilst some rain is good for the garden, sun would be helpful too. This is all a long winded way of explaining why, for this wine, I was not able to use only rhubarb that we had grown.


For this recipe I needed 3 lbs of rhubarb and only 1 lb was available. (This year, mostly our rhubarb has been stewed and in porridge.) Happily, Liz and David have a monster rhubarb in their garden and did not object to me stealing many butch stalks on Sunday morning, 16th June.

The elderflowers mostly came from the elder tree in the Synagogue, overhanging our back fence. This is the first year that I have noticed this, and it is a tree to be encouraged (unlike the enormous sycamore which keeps our garden in shade). However, I needed more so walked up and down Bentcliffe Drive, taking at least one head of elderflowers from each elder that I passed (all four of them). I stripped the flowers from their stalks outside during a rare break from the rain and ended up with about a pint (and a black thumbnail). 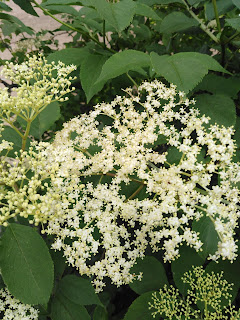 The mint came from our garden and was a handful of pepper- and spearmint combined. 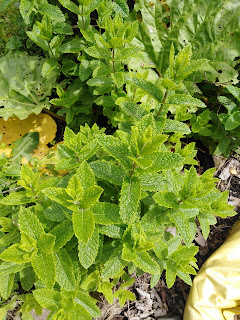 In the kitchen I sliced the rhubarb into thin pieces and put it  into the bucket with the elderflowers and the mint, roughly chopped. I poured over 3 lbs sugar and 6.5 pints of boiling water. It is always a good perfume when the boiling water hits these ingredients.

The mix had cooled enough by the evening to add the yeast, pectolase and nutrient (a teaspoon of each). I made intermittent attempts to remember to stir this through the week, until Thursday evening, 20th June, when it all went into its demijohn. This was the usual method: colander first to fish out most the solids, followed by funnel, sieve and jug into the demijohn. My backing track throughout was Cardiff Singer of the Year on Radio 3. The resulting wine is just as pink as the pure rhubarb.

By racking on 20th July, the wine was still just as pink and had mostly cleared. The taste was promising and it did not need much additional sugar. I added 1 oz, dissolved in half a pint of water.


I bottled this on 7th March and I am just a little disappointed with the end result of this wine. It has not cleared entirely and isn't as splendid as previous years. Claire thinks I have overdone it on the mint.
If you want to see how this flavour came out, click here.