I was very much in two minds about making dandelion wine this year: the Magnolia Petal wine was to be its substitute. But as I have been driving home the last three weeks, the road verges have been golden with dandelions. Each journey has been a temptation, and my resolve to give dandelion wine a miss has weakened with each one. Therefore, on Good Friday, I struck out with my jug and a plastic bag to pick flowers. I had intended to walk all the way to the fields by Potternewton Lane, but thought I should have a quick look at Allerton Grange before making that half-hour trip. I am glad I did: there were dandelions in abundance and, whilst it did my step-count no good, foraging for flowers round the corner meant that I spent an hour less of my day with wine-making activities. 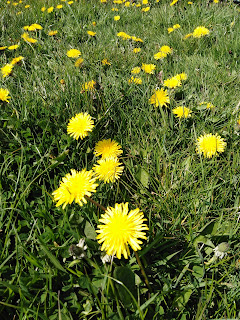 It was a glorious afternoon, picking dandelions in the sunlight, listening to a competitive father beat his under-tens at football. An Indian osteopath was interested in what I was doing and I had a long conversation with him about wine-making. At no point did he look as if he wanted to back away slowly. 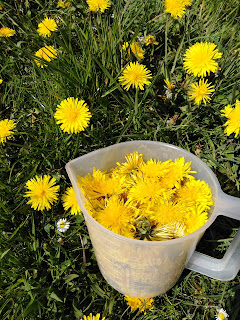 I measured 6 pints of dandelion heads in my jug and took them home to boil up in 7 pints of water, 2 lbs 12 oz sugar and the thinly peeled rind of two lemons and one orange. This was brought to the boil and boiled for 20 minutes. I squeezed the citrus fruits and put the juice and half a kilo of minced sultanas into my bucket, pouring the contents of the cauldron over this once the twenty minutes was up. 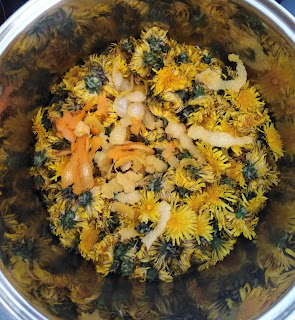 Next day I added the yeast and a teaspoon each of nutrient, pectolase and tannin. I pretty much left the wine to its own devices until Thursday evening, 12th April, giving it only the occasional stir.

On Thursday, after returning from a solicitors' event involving beer and pies, I put the liquid into its demijohn, straining out the solids. The amount of water I had used was exactly right - nothing spare was left.

Dandelion wine at this stage does not suggest its eventual golden colour - though it isn't quite as brown as the magnolia. 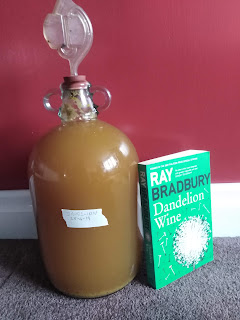 If you want to see how this wine turned out, click here.
Posted by Ben Hardy at 15:15