One of the two colours associated with Halloween is Orange. On the basis that I don't have a 'Black Wine', I opened this bottle instead. We finished it in one sitting - never a great idea for a Wednesday night. Claire had sent me a text earlier in the day saying that it had been 'Bloody'. By this she meant that she had received an overwhelming number of blood samples to analyse and did not stop for 10 hours. Hence an entire bottle of Orange Wine whilst distributing sweets to neighbourhood children. 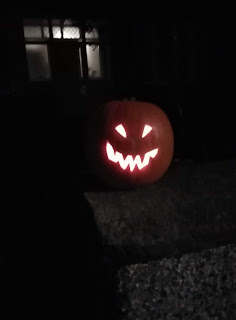