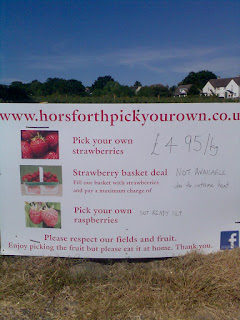 On Monday 2nd July, rather than being at work, I spent my day eating breakfast at Crathorne Hall, drinking coffee in Yarm, investigating a Norman church just off the A19 and picking strawberries in Horsforth. It had been our twentieth wedding anniversary the day before and a suitable day for a holiday. Glorious weather too - though it has been glorious for two months now. I cannot remember a summer like this one.

I went to pick strawberries by myself, which turned out to be a Good Thing. When I arrived at last year's Pick Your Own field, there was a large sign saying it had moved, with a corresponding post-code but no further address. Happily Claire was at home and googled the post-code for me, thus avoiding a frustrating and fruitless trip.

The Pick Your Own was not particularly busy and the strawberries (Florence variety) were abundant. Most the other people there were mothers with pre-school children having an afternoon out and trying to convince their charges to pick rather than eat the fruit. I wanted 5 lbs of strawberries - four for this batch and one for a mixed fruit wine later in the year, and came home with nearly six.

I washed and hulled the four pounds I needed for strawberry wine (freezing the remainder) and mashed them in the bucket - turning them into a pink offal-like consistency. I poured over four pints of boiling water and then left it all until the following day, Tuesday 3rd July.

On Tuesday I took the pulp from the liquid, firstly using a colander and putting the pulp in a plastic bowl and then pouring the liquid into a demijohn through my nylon sieve and funnel, again retaining the pulp. I poured two pints of cold water over the pulp and swirled it round a bit. This sat infusing while I cleaned and sterilised my bucket. I then separated the pulp from the new liquid, putting the liquid in the bucket and discarding the pulp, and poured the strawberry juice in the demijohn back into the bucket.

I added 3 lbs of sugar, the yeast and a teaspoon each of tannin, pectolase and nutrient. This frothed away to itself over the next four days and I stirred it occasionally.

I poured the liquid into its demijohn on Saturday 7th July, leaving sufficient space at the top to avoid any overspill during its most active fermentation, keeping some back in a bottle for topping up. Its colour is more pink and less post-box red than I think is usual. 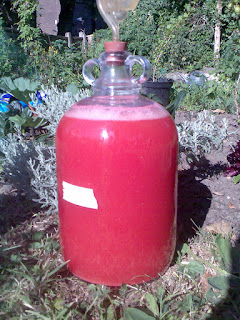