On Saturday 7th July, back in the days when the country was still excited about the World Cup, Claire and I did our weekly shopping in Chapel Allerton. They have the world's smallest and busiest greengrocers there, where you have to fight your way through the crowds to select onions and then have a fifteen minute queue stretching out the door to pay. It was whilst waiting in this line that I noticed there were several 2kg boxes of cherries being sold for £3.50 each. I couldn't resist. I have only made cherry wine once before and that was five years ago. It was one of the best wines that I have ever made, so even though buying wine ingredients from a shop in July feels like cheating, I took a box of cherries with me.

The same afternoon, I removed stalks from the cherries, weighed the fruit in Imperial measurements (4 lbs 7 oz - this is a pound and a half less than I used when making cherry wine before, so I suspect this one won't be as good) and washed them. As with last time, I did not de-stone the cherries. Instead I put them in my bucket and gave them a good mash, which was difficult to begin with but got easier. I poured in 3 lbs of sugar and covered this with 6 pints of boiling water, giving it all a stir. The bucket was then left for two days.

On Monday night, I took the cherry pulp out of the liquid (using a colander first and then a jug and sieve), straining the liquid into my biggest pan. I boiled this up - creating a scum on top - and then poured it all back into the bucket, scum and all.

On Tuesday morning, 10th July (England was still excited about football) I put in the yeast and a teaspoon each of citric acid, pectolase and nutrient. I also had a sip of the liquid, which was insipid rather than bursting with cherry flavour. Hmmm.

This morning, Saturday 14th July (where England's World Cup hopes are but a distant memory) I have put the wine into its demijohn. I poured this through a sieve, removing some scum. There looks to be a large sediment, but the wine is a lovely cherry-red colour. 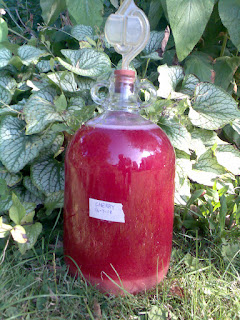