This bottle was a well deserved celebration for performing the solo bassoon part in Mozart's Sinfonia Concertante. I have been practising for weeks, and it went better than I could have hoped. There is nothing more thrilling than playing well to an audience. Consequently I drank most of this wine myself, though shared some of it around. It has a sharp, tart taste where both blackcurrant and gooseberry are pronounced. Janet thought it was wonderful, but I am struggling to remember who else at Rydal I pressed it upon. 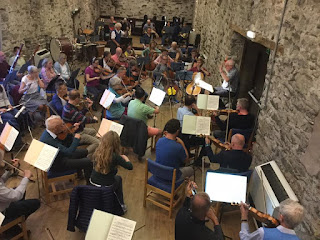 If you want to read a fuller account of how it felt to perform, keep on reading:

The orchestra started up and this was it; we were really going to do it. There are about eighty bars before the soloists come in and I spent them trying not to shake. And then, all of a sudden, we were playing. The notes were there, doing what they should, piecing themselves together and I was partly responsible. I certainly wasn't relaxed, not at the beginning, but the sheer exhilarating terror started to lessen. The entries were made and bars rest were counted correctly. This was going well. This was getting towards fun. The first movement is both the best and the easiest and when it was over, the audience and orchestra applauded. The second movement was slower than any of us would have liked - it requires sustained, stable notes and these are not comfortable on the lip. I felt my first passage of semiquavers slipping away from my fingers but I wrestled them back into control and the remainder of the movement played itself. Then it was the Variations. We started at quite a lick and those bars of semiquavers at the beginning, which I have been practising so hard, were perfect. Not a dropped note or a fluff among them. Variation two was less good (and my personal low of the piece) but once the music is running past you, all you can do is run at its speed and hope to regain your footing. The variations were all slower than I would have liked - we were following the conductor's beat, which was an error but difficult to break out of. However, the tempo was not so slow as to kill the music and at the end we got a huge round of applause. Then we did the first movement again. This time I was entirely relaxed. I had already done this and knew I could do it again - and it was fabulous (if I do say so myself). I could not have been more pleased with the result.
Posted by Ben Hardy at 19:49