Nectarine Wine - The Making Of... 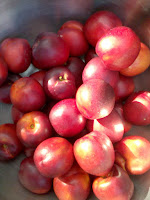 My wine making thumbs have been twitching. Having made Blackcurrant in July this year, it looked like August was to be an empty month. This, of course, would be sacrilege, and Something Had To Be Done. On Saturday morning, 18th August, I dropped Claire back at the house with our week's shopping and drove to Harehills, promising that I wouldn't come back with anything too exotic. My thoughts were either Tomato or Nectarine - I have not done either - depending on which were cheap. 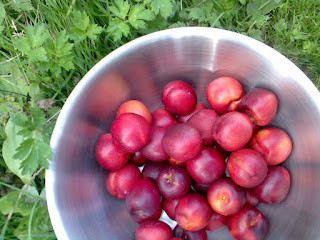 Nectarines were being sold twelve for a pound and that fitted the bill nicely. The argument 'against' is that my attempts at peach wine have been Bloody Awful, and nectarines are closely related. The argument 'for' is alphabetical. My only other N wine has been Nettle, which Claire described as tasting like chopped liver and fag ash, and this has to be better. Right? 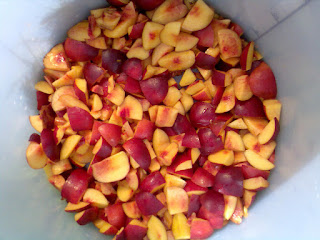 Anyway, I started the wine on Sunday, making it up as I went along. I weighed out 5 lbs of nectarines - which came to 30 in number, washed them and chopped them into small pieces, discarding the stones. (The stones themselves weighed 11 oz). I put the fruit into my bucket and gave it a thorough mashing. Having read that peaches give very little body to a wine, and I presume the same is true of nectarines, I added 8 oz of minced sultanas. At this stage the mixture looked like particularly colourful vomit, but smelt divine.

I added 2 lbs 12 oz sugar and poured over six and a half (UK) pints of boiling water. About eight hours later, when the mix had cooled, I added the yeast and a teaspoon each of pectolase, tannin and nutrient.

On Thursday night, 24th August, I sifted out the solids and put the liquid into its demijohn. I could have used at least half a pint less water in the recipe. The wine is an attractive peachy-orange, but I hear from Facebook posts that it will take an age to clear. 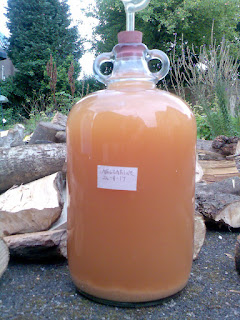 If you want to see how this wine turned out, click here.
Posted by Ben Hardy at 21:27