This year has been less prolific in terms of blackcurrants than last. The fruit has also been later and I wonder if the two are connected. My (undoubtedly false) memories of last year reveal handfuls of blackcurrants being plucked from our bushes daily from July to August. This summer has required more work, with half a pound being collected once every four or five days. In total our bushes have produced 5 lbs and 7 oz and that is not enough for a double batch.


Claire suggested bulking out the fruit with our gooseberries, so that is what I have done. The gooseberries have also been a little disappointing. I got excited in April, seeing how many flowers we had and how unaffected by sawfly our goosberries were. But I think in total I harvested fewer than 2 lbs. Nevermind - next year should be better.

So, what I have done is make one demijohn of pure blackcurrant wine, for which I needed 3 lbs of blackcurrants, and one demijohn of blackcurrant & gooseberry wine, which has 2 lbs blackcurrants and 1 lb gooseberries (a mix of green and red). The method has been the same in each case.
On Sunday, 14th August, I defrosted the fruit and put each batch in a different bucket. I mashed these with a potato masher, until the fruit had become a pulpy paste. For each, I dissolved 3 lbs of sugar in 5½ pints of water. I brought this to the boil and poured it over the fruit. For the pure blackcurrant, this water was exactly right. The other could have had about a quarter of a pint more.

Next morning I added the yeast and a teaspoon of nutrient and pectolase to each bucket.

I should have put both wines into their demijohns on Friday night, but it was Book Group (Fingersmith by Sarah Waters - excellent). Instead, I did this on Saturday morning in between last night's washing-up and having breakfast. Making wine in one's pyjamas suggests a dissolute lifestyle. 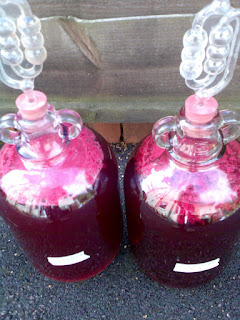 If you want to see how the blackcurrant and gooseberry came out, click here.
Posted by Ben Hardy at 16:35