On returning from work on Thursday, having had an alcohol-free Wednesday, I thought a small whisky would be in order. First, though, I checked my diary to ensure I had no engagements for the evening.  "Quintets in Harrogate," it read. "Bugger," I thought, and shelved the whisky idea. I grabbed my bassoon and headed to Esther's. The evening was a lot of fun and the Taffanel Quintet particularly so. At the end, Esther asked if anyone wanted any gooseberries because she had rather more than she needed. I decided to push my luck and asked if she had 6 lbs. She did. Esther has been stock-piling gooseberries for years because no-one in her family likes them, so she fished around in her freezer and came back with bags labelled '2015' and '2016'. I defrosted these overnight and began the wine on Friday evening, 30th June.

It has been several years since I have made gooseberry wine. We have plenty of bushes at home and this year I hoped I would be self-sufficient. However, we also have a family of three fat pigeons in our garden who are partial to the fruit. Oh, for a shot-gun and a good aim! 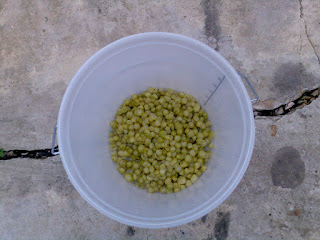 Anyway, I put the gooseberries in my bucket and spent ten minutes mashing them. Having been frozen and defrosted, they mashed easily and gave out a lot of liquid. I added 2 lbs 12 oz sugar and poured over 6 pints of boiling water, giving it all a thorough stir. Next morning, 1st July, I added a teaspoon each of nutrient, pectolase and tannin as well as the yeast.

On Wednesday afternoon, 5th July, I put the wine into its demijohn. I am on holiday this week, but had had nothing specific planned and an afternoon of solid wine-making (after an hour and a half's nap) is a relaxing way to spend time away from work. I removed the gooseberries from the liquid firstly with a colander and then using a jug, sieve and funnel - making sure not to fill the demijohn too full. The wine is a pleasing light green and bubbling away. 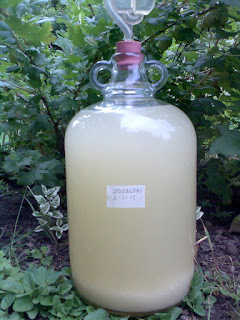 If you want to see how this wine turned out, click here.
Posted by Ben Hardy at 22:56