April is a cruel month. It is on the verge of foraging season but that really only produces nettles and dandelions. I made dandelion wine last year and nettle wine about ten years ago. It is too soon to make either again. Therefore, for a decent wine, I need to buy my ingredients. This year I was in a quandary about what to make. Should I give Kiwi Fruit another go, or experiment with Tomato or Carrot? On 6th April I opened a bottle of Ginger Wine. It was so good that my mind was made up. Ginger it was to be, and I have followed my 2016 recipe precisely. If this wine is the same, I will promote ginger to a regular flavour rather than it making the occasional guest appearance. 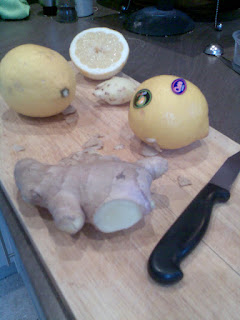 I bought my ingredients on Saturday morning, 8th April, from Ruby's but started making the wine on Sunday, on account of playing in a concert in Pontefract on Saturday. The weather was so good the whole weekend that doing anything other than sitting quietly in the garden seemed like a chore. 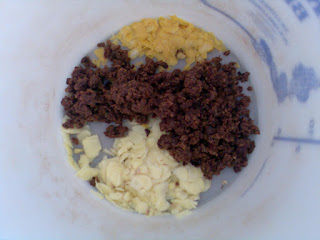 Anyway, on Sunday afternoon I measured out 5½ oz of ginger and took the outer rough skin off it, though was not overly fussy in doing so. I sliced the ginger into the thinnest slices I could, reasoning that the larger the surface area, the more gingery the taste. Next I took the outer peel off four lemons, doing my best to avoid the pith (though 'my best' would only be classified as 'adequate' by Ofsted). Both the ginger and peel went into the bucket. I minced a pound of sultanas and put these in too. I squeezed all four lemons, added the juice and then boiled 3½ pints of water and put this in.

Whilst I suspect it makes no difference, I waited 24 hours before adding 2 lbs 8 oz sugar and another 3½ pints of boiling water. 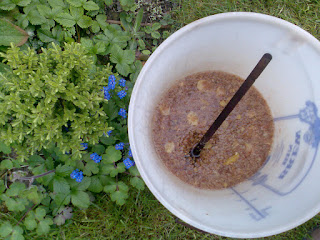 On Tuesday morning, 11th April, I added the yeast and a teaspoon each of nutrient and pectolase. Through the week I stirred the wine once or twice a day and today, Saturday 15th April, I put the wine into its demijohn. This took longer than I had anticipated, and I blame the minced sultanas. The wine smells lovely, though, and there is a gingery tinge to its colour. 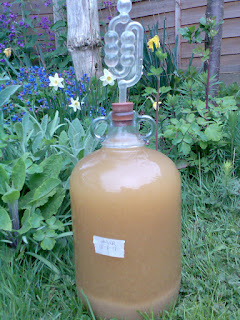 If you want to see how this wine turned out, click here
Posted by Ben Hardy at 12:27