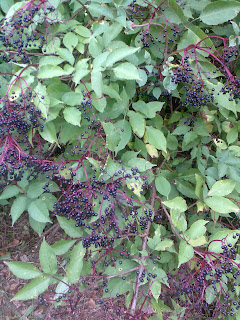 When I booked it, I knew that our fortnight's holiday in America would interfere with wine making. It was elderberry that was most affected. The berries were ripe in September, but I had too much to do the week before we left to make wine as well. Forward planning, though, meant that I had two elderberry picking sessions on my walk home from work. Each of these produced not quite two pounds of fruit and some interested passers by. There was just room in the freezer for me to store the berries while we were away. 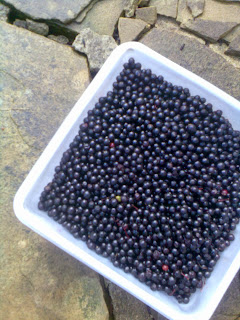 I was concerned that by mid-October all elderberries would have gone over and I would have to make a single batch. However, when I went to the Stonegate fields on 13th October, there were plenty of perfect ripeness. It was not the best weather for picking, though. I got thoroughly drenched and stayed out less time than I would otherwise. This session produced 2 lbs exactly, making a total of 5 lbs 12 oz, which is 4 oz under the recipe weight for a double batch. That is good enough for me. And stripping the berries in three sessions meant I did not get bored and frustrated.


I put the berries in the bucket and added half a pint of boiling water to help defrost the frozen ones. I gave it all a thorough mashing and poured over another 12 pints of boiling water.

On Monday morning, after a night of jet-lag induced wakefulness, I added the yeast (burgundy), a teaspoon of pectolase and half as much again nutrient. Then on Wednesday evening (after another restless night) I put in 5-and-a-half pounds of sugar. 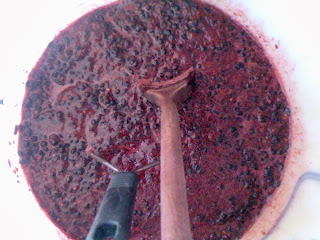 I put it into its demijohns on Sunday 20th October, a day later than I had intended. There was about a pint too much liquid, though its colour is a pleasing purple. And yes, I recognise that is a non-sequitur. 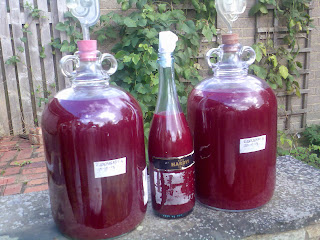 If you want to see how this wine turned out, click here
Posted by Ben Hardy at 21:50