Most years I start by crab apple wine on the cusp of October. This year it is slap bang in the middle. If anything, it is late October - Sunday the 20th. I blame our two week holiday in America, which I timed carefully so that it did not massively interfere with my wine calendar. Leaving the crab apple wine three weeks beyond my normal timing may prove to be a wise move. The apples on our tree are redder and riper, and come off with barely a tug.

I spent around half an hour this morning picking crab apples in intermittent sunshine, collecting 12 pounds. This is probably about a third of what the tree has to offer, and I don't really know what to do with the rest. Possibly Freecycle them. Or make more wine.

For every three apples I picked, one would plummet into the undergrowth. I retrieved a handful, but mostly the casualties were lost forever, and that was frustrating. 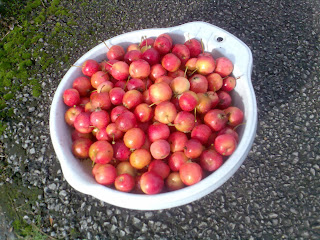 This afternooon, which has been hugely busy - I have been in the kitched for four and a half hours making wine, baking bread and cooking lentil boll - I washed the apples and sliced them using the food processor. These went into the bucket with three pounds of minced sultanas (again using the food processor) and nine pounds of sugar. I boiled 22 pints of water and poured this over the ingredients, giving it all a good stir. 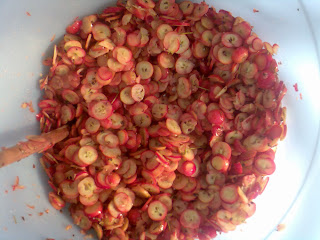 On Monday morning I put in the yeast and two teaspoons each of nutrient and pectolase. The bucket I used has an air trap and has been annoying Claire by belching loudly at frequent intervals. We can hear it from our bedroom.

Anyway, I put this into its three demijohns on Friday night, 25th October. The first stage involved scooping out the apples with a plastic collander, and I am certain this saved an hour or so. From then on it was relatively quick. The wine is browner than in past years, but should clear to a glorious golden yellow. 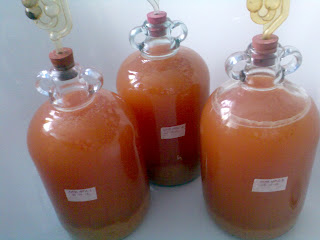 If you want to see how this wine turned out, click here
Posted by Ben Hardy at 11:28