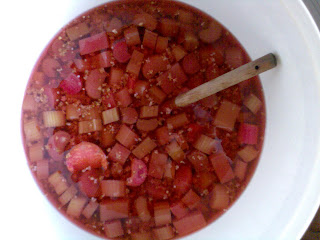 Like everything else this year, elderflowers are late to bloom. It is 24th June and they are only just coming out now. Our rhubarb is starting to look a little old, so a couple of weeks ago I pulled several stalks from our two main patches - though mostly from Shirley's plant. These were weighed (3lbs 2oz), cut into pieces and shoved in the freezer. I removed them this morning and picked elderflowers on my way home from work.
My not-quite-four-mile walk has a section through woodland, and I cross Meanwood Beck then walk along a path adjoining a field. It is a delightful journey and partly (though only partly) the reason I don't catch the bus. And there are elder trees dotted all over.

This evening I picked a few in the woodland and some along the patch, but I planned mostly to get them from the field. I knew the field had horses, in much the same way I knew it had buttercups. After climbing over the wall I noted the horses were all under one elder tree so I made my way to the other some distance away and started picking. There was a definite sound of trotting behind me and it was getting closer. I turned to find three surprisingly large horses running at me enthusiastically. I think they were hungry. Making 'Good Horse' noises and patting one particularly insistent one on the nose, I continued collecting elderflowers. Until I felt my backpack being nibbled. I made my apologies and withdrew.
At home, half an hour's stripping of flowers left me with half a pint, and I put these in the bucket with all the rhubarb, 3lbs sugar and 6½ pints of boiling water. I left it all over night and put in the yeast and a teaspoon each of pectolase and nutrient the following morning.

I sieved out the fruit and flowers, putting the liquid into its demijohn on Friday night, 28th June, after having spent an evening drinking beer with Matthew. The wine is in a brown glass demijohn, in an effort to preserve its candy-floss pinkness.
If you want to see how this wine turned out, click here
Posted by Ben Hardy at 12:08