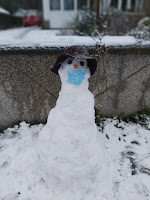 Saturday 9th January began as one of those bitterly cold sunlit days which is the best sort of winter day. Friday's snow had turned from damp and malleable to hard, crunchy and entirely satisfying to walk over. Claire's gender non-specific snowperson was still standing and no-one had stolen its hat. There were a fox's footsteps leading down our drive and everything in the neighbourhood looked different. We get snow so rarely, far less than I remember from my childhood, that I become giddy when it is here.

The walk to Chapel Allerton to buy ingredients for ginger wine was a pleasure, particularly my route through the park watching children hurtling down the hill on their sleds, colourful against the white.

I had intended to start this wine on the Saturday but the day ran away from me, so winemaking was a task for Sunday instead. I weighed 6½ oz ginger and, having read an article in The Guardian saying that removing skin from ginger was unnecessary, I gave it a quick scrub instead, sliced it thinly - skin and all - and put this in my bucket. Next I took four lemons and sliced the outermost peel from them, avoiding the pith, and put this in the bucket along with all their juice (11 fluid ounces). I then minced 1 lb of sultanas with the food processor and this went in too. My final winemaking task for the day was to boil 3½ pints of water and pour this over everything.

On Monday lunchtime, a day where the snow has vanished entirely, I boiled another 3½ pints of water and put this into the bucket with 2 lbs 8 oz of sugar. I let this cool for five hours and then added a teaspoon each of yeast, nutrient and pectolase.

It took well over 24 hours before I was convinced that the yeast was doing its thing, but eventually it clearly was. I left the wine until Saturday 16th January before putting it into the demijohn - and there it is bubbling away: opaque and dark yellow.