Easter Monday should be spent in the garden, followed by a trip to the Garden Centre. This is simply what middle-class, middle-aged British people do. It is our cultural duty. On 2nd April 2018, I failed my nation. In my defence, for much of the day it was snowing and when not snowing there was a torrent of rain. Instead, I spent the morning tidying our bedroom (unearthing paraphernalia from Amsterdam - I was last there in 2016) and the afternoon making kiwi-fruit wine. 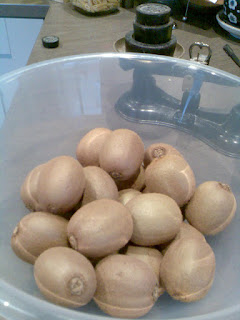 I have only made this flavour once before - five years ago - though if you google 'Kiwi Fruit wine' it is the second web page out of the box. I made up the recipe that time and pretty much followed it this. To start, I counted out 20 kiwi fruit, weighed them and added another two to bring the weight up to 3 lbs 8 oz. I cut each of them in half, held the half over the bucket and scooped the insides out with a spoon, discarding the skin. This had the advantage that the flesh and all spare juice landed squarely in the bucket. On the downside I discovered a combination of fine kiwi fruit hairs and acidic kiwi fruit juice has blistered my finger and caused an irritating rash. How I suffer for my hobby! 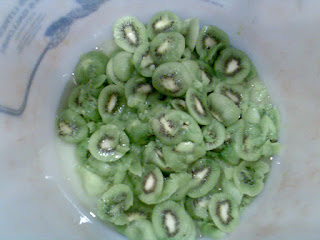 I mashed the fruit with a potato masher, added 3 lbs of sugar and poured over 6½ pints of boiling water. On Tuesday morning I put in a teaspoon each of nutrient, pectolase and tannin (I can't imagine that it needs any additional acid) and added the yeast. I then left the wine in its bucket until Saturday morning, 7th April, mostly forgetting to stir it twice a day. 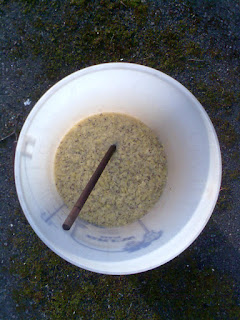 On Saturday I got up early - Claire has just got a new phone and her alarm turns out to be a rooster call, which refuses to be turned off - and did my wine-making jobs before ten. Transferring the wine to its demijohn was straightforward and I could have reduced the water in the initial mix by a quarter of a pint - but at that level it won't make a difference. I am pleased that the wine has a distinctly green tinge, albeit on the greyish side. Claire thinks it looks like summer pond water - full of algae but (hopefully) no fish. 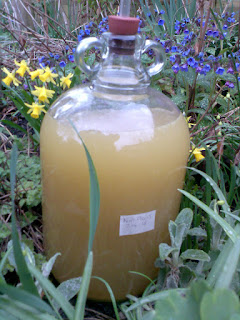