I may live to regret this wine. The phrase 'Celery Wine' does not summon up images of a lip-smacking paradise. However, last summer I was rung by a wine-making enthusiast who assured me that this was a successful flavour. And February is a month to experiment - it is a single batch month where nothing is in season. Perhaps, though, I should have repeated Exotic Tinned Fruit. Time will tell.

Today, 5th February, has been lovely. I did not get dressed until noon, which is always the sign of a good Sunday. Whilst I was lounging around, Claire - suffering from a hearty cough - was outside shovelling snow off our street. But she claims that she enjoyed it.

We spent the afternoon in York, eating Big Breakfast and seeing Bridget, who is spending the weekend in Terrington. Last time we saw her she was eight months pregnant. This time she is again eight months pregnant - but had Gemma in tow. Gemma is at 'delightful toddler' stage and is a mini-Bridget: red hair, blue eyes, mischevious looking.

Anyway, back at home I chopped up four pounds of celery and boiled it for thirty minutes in seven and a half pints of water. This was poured over three pounds of sugar and one tablespoon of citric acid. It is now a pale green liquid smelling of soup.

﻿
﻿I put in the yeast and a teaspoon of nutrient on Monday morning. I have not bothered to put in any pectolase as I do not thing celery is a rich source of pectin.

During the five days it has been in its bucket I have stirred the wine twice a day and each time have been surprised and pleased at the fragrance this produces. I put the wine in its demijohn on Friday night, 10th February, whilst listening to 'Any Questions' on Radio 4. This involved Anne Widdecombe and lots of shouting. It is a noisy, irritating programme. The volume of liquid I used was perfect and though the wine still looks like a nourishing broth, I am rather more hopeful about it than I was originally.

*
If you want my first impressions of how it tastes, click here. 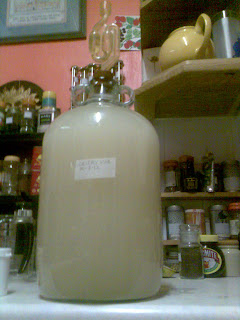