It is currently about half past seven in the evening on 2nd October, and I am exhausted. The day has been one of solid chores. Book Group is to be held at our house on Friday (‘Frenchman’s Creek’ by Daphne du Maurier – Absolutely Dreadful) and as I’m out every night this coming week, today is really the only opportunity to get the house in order. So, I have spent the day putting things from places they shouldn’t be to places they should. Which sounds easy enough, but by one o’clock I was thoroughly bored and hungry. Then I got unreasonably cross making pancakes – it all went wrong as soon as the batter hit the pan and refused to spread evenly into a pleasing circle. At least I had the wine making to look forward to.

And making the wine was good. It started off with Claire cutting branches off our tree – the top ones with the ripest, most laden fruit. I held the ladder and caught the foliage as it came down. This produced seven pounds of apples, which only left another five to pick in the slower, more traditional method. (I am making a triple batch – 18 bottles). 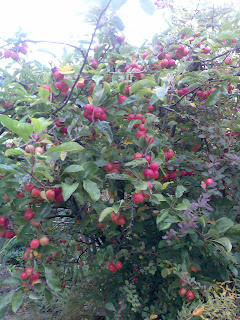 I think the crab apples are riper than they were at this point last year. The fabulous Indian Summer may be helping. It is hotter now than it was at any point in July and records are being broken. Many of the apples have been invaded by some insect, but I did not investigate too closely in case it was something that stung. I left the affected apples where they were. There were also several ladybirds in evidence, and I wonder if the two are related. 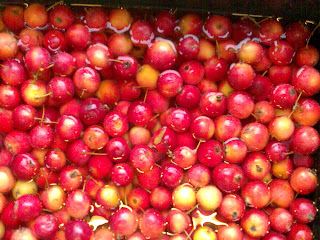 Anyway, after picking and weighing the apples, I sliced them with the food processor, added 3 lbs of minced sultanas and 9 lbs of sugar. I poured over 21 pints of boiling water and stirred it all up. The bucket is close to full, and standing in the middle of the kitchen being vaguely incovenient (though Claire argues against the use of the adverb in that sentence).

I added the yeast and two teaspoons each of pectolase, citric acid and nutrient on Monday morning, 3rd October.

It all went into its demijohns on Saturday afternoon, 8th October. This was a long process - about ninety minutes - but I had a Radio 4 dramatisation of Chandler's 'High Window' to keep me company. Not that I could follow the plot. The amount of water this year has proved perfect but as always, I fear a huge sediment. The colour is its usual browny pink. 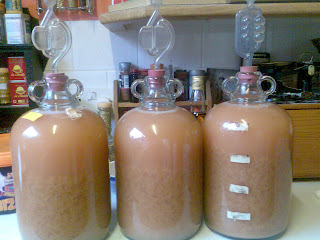