Blackberry Wine - The Making Of ...


It is that weekend of the year again, the last in August, where blackberries call to me from York Victorian Cemetery, advertising their all-round plumpness. 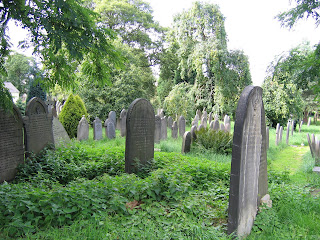 This year my parents are away, so I only had Claire's extra pair of hands to help me pick. Fearing our journey would be delayed by Leeds Festival, we set off for York on Saturday before 1 p.m. I am very glad that we did - not for reasons of traffic (which was barely above normal) but because of the weather. We got an hour's picking in the sunshine before it began to tip it down. This was not a gentle shower, but full scale cats and dogs. Whereas April 2011 resembled August, August is definitely channelling April. 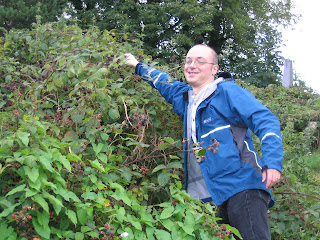 The picking, as always, was pleasant if one discounts the many nettle stings. I found a fabulous patch of blackberries around graves of those who died in 1907. Tom Parker and Barnard Rickman provided particularly lush fruit. Claire plucked her brambles from Amos Howe Harris and, of course, Thomas Douthwaite. In fact, we had competition at Mr Douthwaite's grave stone from a mother and daughter who were picking for jam and puddings. I also came across two French women collecting blackberries, but other than saying a quick 'bonjour' I did not engage them in conversation. 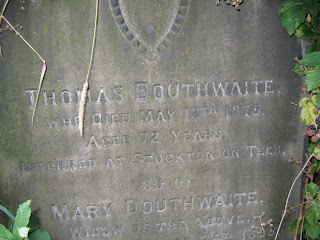 Back home I weighed the fruit. Between us we picked 11 lbs, 14 oz, which is just two ounces short of that required by my recipe for a triple batch. I decided that this was not statistically significant so have put them in a bucket, crushed them with a potato masher and poured over 16 ½ pints of boiling water. I added the yeast and two teaspoons each of nutrient and pectolase on Sunday morning. 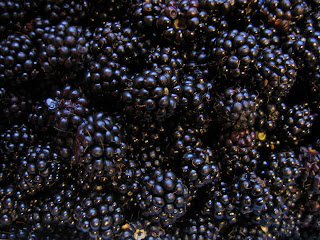 The fruit was sieved out tonight, Wednesday evening, 31st August. This was not the ideal night to do this. We have been for a curry with Claire’s colleagues and so I began my wine jobs at 8:45 p.m. It is now 10:45, and I have yet to iron tomorrow’s shirt. The heaviness of my eyelids suggests that I will do it tomorrow.

I sieved the liquid into three demijohns, washed and re-sterilised the bucket, added 7 ½ lbs sugar, poured the liquid back in and stirred until the sugar was dissolved. I shall transfer it back into the demijohns on Saturday – when I shall also upload a few photos onto this blog.