On a wet Wednesday evening in late May, Claire and I drove to Nick's house in Morley to gather rhubarb. In previous years, Nick has delivered rhubarb to us but we were curious about his allotment and so made arrangements to visit. Nick lives within the Rhubarb Triangle and he has an impressive patch. His rhubarb originated from our garden and, whilst our plants are fine, his are flourishing. Giving rhubarb away in vast quantities helps Nick control his stock but it threatens to take over. The remainder of his allotment is well-ordered and lush and the rhubarb is kept in one (large) corner. 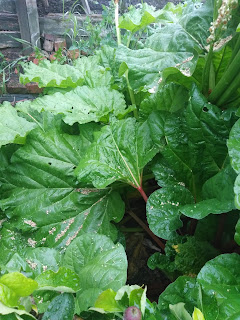 Between us we pulled up 6 lbs of stalks, concentrating on the pinker variety, and this was not a difficult or lengthy task. One cup of tea later we were on our way home with our haul, plus some chard plants for the garden. 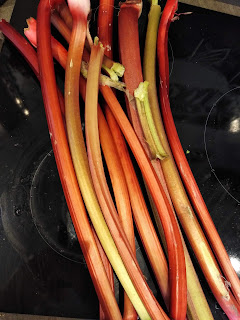 I started the wine on Friday night, 31st May, whilst Claire was out rehearsing string quartets for Saturday's party. 6 lbs of rhubarb stalks is what is required for a double batch. I washed these, chopped them into slices of about 1 cm in thickness (only spilling one bowl over the floor and swearing loudly) and put them into my bucket. I added 6 lbs sugar and 12-and-a-half pints of boiling water. Rhubarb wine is really very easy! 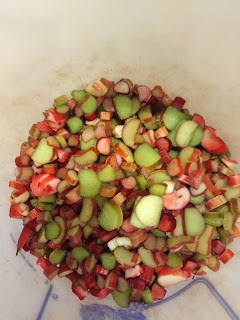 Saturday morning I added a teaspoon of yeast and pectolase and a teaspoon and a half of nutrient. Ordinarily I would have put this into demijohns on Wednesday, but Wednesday night is WYSO night, so I did this on Thursday instead. I fished the rhubarb pieces out with a colander as far as I could and kept these in a sterilised bowl. I then used the jug, funnel and sieve method to get the (now striking pale pink) liquid into its demijohns. There was quite a gap in each demijohn by the end so I washed my hands and squeezed down the saved rhubarb, pouring the released liquid into my jug. This went into my spare bottle for topping up the demijohns. 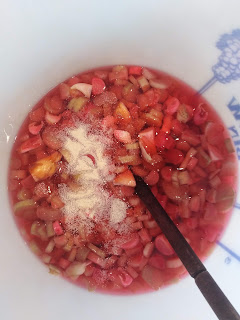 With either great foresight or luck, I emptied the jug into the bottle after getting about three-quarters of a pint. When the jug had another half pint in, I knocked it over, spilling its contents all over everything. There was much swearing at this point, followed by a concerned wife coming into the kitchen and some frantic mopping. Not a great disaster in the grand scheme of things, but intensely annoying.

I racked this on 3rd July, less than a month from putting it into its demijohns. It got half a pint of water and 3 oz sugar divided between the two demijohns. 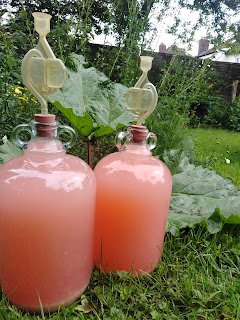 If you want to see how this wine turned out, click here.
Posted by Ben Hardy at 08:26