King's Cross Station, after midnight, is a magical place. It is a huge domed space, empty of people save for a few late night revellers returning home. Last Saturday night I was one of those - reliving my youth after a 'Quarter of a Century Since Graduating from Warwick' reunion. Being in the station with Caroline, Susan and Stuart was only a short moment, but my favourite of the weekend.


On Sunday 14th May I came home to find nearly 7 lbs rhubarb waiting for me to make into wine. Nick had dropped this off from his allotment on Saturday and in return was rewarded with two bottles of last year's rhubarb wine. This strikes me as a good deal which makes everyone happy. I made the rhubarb up to 9 lbs from our garden, which is the right quantity for a triple batch.


All the rhubarb was washed and cut up into slices - none more than an inch and most considerably less than that. I put the sliced rhubarb into my bucket and poured 20 pints of boiling water over it, releasing a wonderful scent of stewed rhubarb. My recipe requires 9 lbs of sugar for a triple batch, but I only had half of that. It being a Sunday evening after an exhausting weekend, I couldn't be arsed to go round to medium-sized Sainsburys to get more, so I put in what I had and made the rest up on Monday. I can't imagine this two-staged approach will affect the wine. 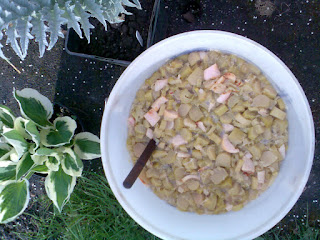 On Monday morning before work (and so before the second application of sugar) I added the yeast and a teaspoon-and-a-half each of nutrient and pectolase. By Tuesday this was frothing nicely.


I put all the liquid into my three demijohns on Friday night, 19th May. As with most wines, I removed the bulk of the fruit with a collander and then proceeded with the sieve-jug-funnel method, leaving a gap at the top of each demijohn to avoid explosions and filling a bottle with some wine for later topping-up purposes. By the time I had finished this it was eight o'clock and Claire & I were both hungry. We left the wine, pale pink and bubbling, and had a fabulous Turkish meal at 'The Olive Branch'. 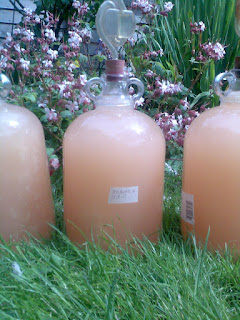 If you want to see how this wine turned out, click here.
Posted by Ben Hardy at 15:41