Sunday 27th September was a day of Autumn mists and mellow fruitfulness. We woke to thick grey fog covering Leeds and set off for Ackworth. Claire had a string orchestra rehearsal at the Quaker School and suggested that I come along, use the time to pick elderberries and join her for a pub lunch afterwards. Mostly, though, I think she wanted me as her chauffeur. 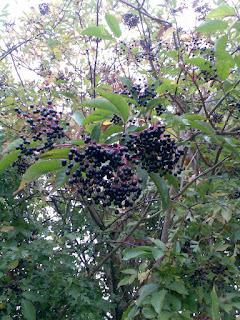 The fog clung to the M62, through Pontefract and was only beginning to lift at Ackworth. On arrival I set off with my plastic bags and wandered around the perimeter of the school's football pitch. This was well stocked with trees and some of them were elders. The dew left behind by the mist picked out hundreds of spiders' webs, each bejeweled and breath-like. I apologised to the spiders as I destroyed their nets to pick fruit.

After the sports ground I bumbled around, sometimes on public footpaths, sometimes not. The only place that rivalled the school for elder trees was the graveyard of St Cuthbert's Church. By the end of the morning I had moved onto blackberries, which are still in abundance.

I needed 6 lbs of elderberries for a double batch and I came away with 6 lbs 3 oz. One heavy plastic bag constitutes about four and a half pounds. Stripping them took two hours, during which time I entertained myself by listening to Radio 4 programmes that I had missed. This period was marked by the vast number of spiders that I had also gathered making an appearance. Don't tell Claire: I allowed most of them to escape into our living room. The earwigs, however, were evicted.

I crushed the berries in the bucket with a potato masher, added 5 lbs 4 oz sugar and poured over 12 pints of boiling water. On Monday morning I added the yeast and a teaspoon each of pectolase and nutrient. I left this until Saturday 3rd October before putting the wine into its demijohns. This was a rapid job once I had fished most the fruit out with a collander. The amount of water I used was perfect. Its colour is one that I would like to use when painting the new house. 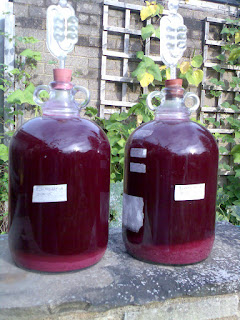