The long Easter weekend always feels self-indulgent. It is four solid days of Sunday, where pottering about is as active as it gets. Today, 7th April, I have been out of the house once - to get the Guardian, and that mostly for the Araucaria crossword. Other than that I have been making soup and wine, and listening to the Classic FM 'Top 300 Pieces of Classical Music' countdown. Though I had to turn it off once it reached Walton's Crown Imperial, which must be the most dreadful piece of music ever written.

I decided that I would have another go at Exotic Tinned Fruit wine this month, and make it a double batch. I am a little worried, however, that I do not have quite enough fruit. There are 14 oz mangoes, 9 oz lychees, 8 oz guavas, and 8 oz combined Jack Fruit and Toddy Palm combined (neither of which I have ever even heard of) together with two pints of syrup. Actually that sounds really low on fruit. Too late now.
I had to look up 'Jack Fruit' on Wikipedia, and other than seeing that it exists and is a large, starchy fruit, I am not really any the wiser. I had a small tast of both it and the Toddy Palm (which Claire pointed out looked worryingly like squid rings) and both were pleasant, tasting of generic exotic fruit.
All - fruit and syrup - went into the bucket, I mashed it and then added 12 pints of boiling water and 4 1/2 pounds of sugar. This is less than I would usually add for a double batch, but each fruit came in its own syrup and the initial gravity reading of 1.090 is about right. I put in the yeast plus 1 1/2 teaspoons of nutrient, 1 teaspoon of pectolase and 1/2 teaspoon of amylase on Sunday morning after about ninety minutes of washing up. Ninety! Count them. (We had a splendid meal last night and Claire is busily making pork pies as I write.)

I put all this into its two demijohns on 11th April. It is all a fabulous colour on the borderline between yellow and orange. I suspect there will be a large deposit. The amount of water was not quite right - another pint and a half would have been perfect, but I shall fill it up next time I do any wine making stuff. 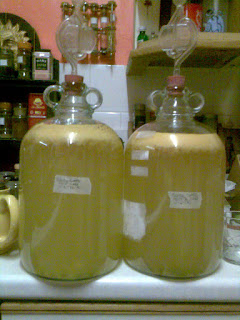