I have been concerned about rhubarb stocks for wine this year. On the basis that non-essential travel is at best frowned upon and at worst illegal, getting rhubarb from Nick - who lives in Morley and is my usual rhubarb source - wasn't really an option. Whilst we have plenty of rhubarb plants in both front and back gardens, many are junior and a bit weedy. Those that are not are mostly used to make porridge more interesting. I managed to persuade Claire that there would be enough for me to make a single batch of pure rhubarb wine and then, in June, a batch of rhubarb, elderflower & mint - but really I wanted to do a double batch of the former. In years gone by, I have done a triple.

It was fortuitous, then, that a couple of weeks ago there was a stormy night (no rain, just wind) that wreaked havoc on our neighbour Liz's rhubarb plant, but which left ours pretty much unscathed. Liz did a batch of wine herself but asked whether I would like any too and brought round 3 lbs in return for a teaspoon of yeast. I chopped these stalks and left them in the freezer for a week or so, getting them out to defrost on Sunday morning, 17th May. Later that day, I negotiated carefully with Claire about which rhubarb plants from our garden could donate another 3 lbs of stalks and once collected I washed and chopped these too. 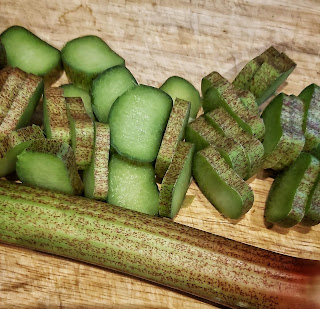 All rhubarb pieces, including the recently defrosted ones, went into my bucket along with all the sugar I had - 4 lbs 12 oz - and 12½ pints of boiling water. I really needed to put in 6 lbs of sugar, but thought that putting in the remainder later would probably be fine. 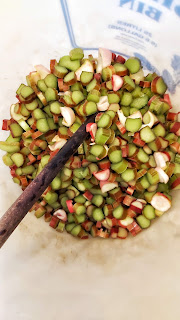 On Monday morning I added a teaspoon each of yeast, nutrient and pectolase, and on Tuesday I ventured out for sugar. Baking products are scarce in this era of Covid 19 and all Sainsburys stored was dark brown sugar (though I did manage to grab a bag of white bread flour, which has become as rare as the Siberian Tiger, and don't talk to me about bread yeast!), so I used this instead. Brown sugar is far bulkier than white and I am concerned that it will affect the flavour - it has certainly altered the colour - so I only used 1 lb of this. 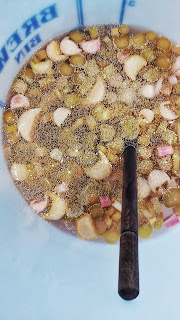 I put the wine into its demijohns on Friday 22nd May. There was more sludge that usual, and I think this is because I froze half the rhubarb. The wine is more orange than pink. 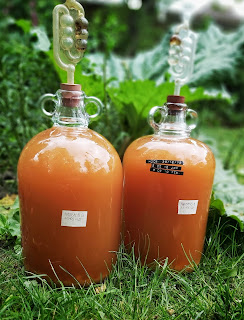 If you want to see how this wine turned out, click here.
Posted by Ben Hardy at 10:12