Yet again, this flavour is fabulous and proves that I should make it every year. It has a freshness and lightness and is very drinkable indeed. There is a hint of mint that Claire believes should not be any stronger - it would be unfortunate to have a toothpaste-flavoured wine. I think it is more subtle than that, but will take her advice and not increase the mint in this year's batch.

We drank the wine in York, where my parents were surprised by our arrival. I had told them a couple of weeks ago, but crucially they had not marked it on the calendar. Despite, or maybe because of, the surprise, it was a lovely evening.

What a good bottle of wine! Sharp and fruity and tasty. We drank it to Toad in the Hole - where I forgot to check the oven temperature, meaning that the Hole/Yorkshire Pudding failed to rise. Damn and Blast. Still tasty, though.

We finished the bottle while watching the last episode of Series 4 of Line of Duty: we have watched the whole series in one weekend, with three episodes today. Really, I should be reading Wild Swans for Book Group on Friday, but I have never 'Binge Watched' before. I feel that this a valuable thing to have experienced. 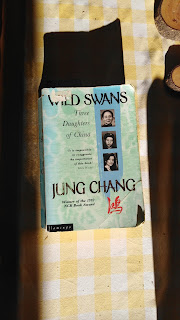 I took this bottle of rhubarb wine along to the Bridgewaters' Chamber Music Party. Claire was playing in three pieces - Brandenburg 6, the Dissonance and a Dvorak piano quartet. I was the designated drinker.

It was a lovely evening and I spent much of it in David and Francesca's fantastic garden learning about different types of bumble bee (there are more than you might imagine). I took my duties as designated drinker seriously and for a while worried that I might be the only one to drink my rhubarb wine. However, I know at least three other people had a go and on the whole their experience was positive. 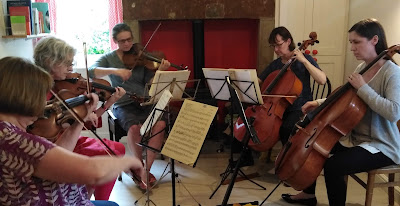 Over the past couple of weeks Claire and I have been binge-watching Line of Duty and on Thursday night it was the final two episodes of Series 3. Naturally we needed a bottle to see us through, and rose petal 2016 is very much a 'Thursday bottle'.

Line of Duty is excellent: the plotting is meticulous, the writing superb, the acting faultless and the whole package is tense and gripping. The Bad Guys are not all bad, and the Good Guys not all good. There is a moral ambiguity to most characters and that makes it all the more interesting.

Bob and Judith stopped in Leeds on Sunday night as a staging post between Wiltshire and Newcastle. This provided an excuse for several cocktails, a vegetarian moussaka and a couple of bottles of wine, of which this elderberry was one. Elderberry 2016 is a fine vintage: dark and rich and smoother than the previous year's. Due to the large amount of alcohol already consumed, we did not finish the bottle but left that particular task for Tuesday night.

This was my 500 ml bottle of Crab Apple wine, chosen to share with Bob, Judith and Claire because we had just drunk two cocktails each and I planned a bottle of elderberry with our main meal.

This wine has not suffered from age at all. Bob described it as a close relation to Croft Original, though it is not as sweet as that implies.

The cocktails were negronis (of course) plus mint juleps, which I thought worked splendidly. I shall investigate these further in due course.

It pays to have low expectations. This bottle of wine, bearing that adage in mind, was rather good. Blackberry 2016 has been a catalogue of disappointment, but this bottle was somehow better. It had a full blackberry flavour and was more full bodied than anticipated. We drank it to the Egg and Pepper Thing - Claire asked me to cook and rather doing a Something New And Possibly Exciting, I returned to an old favourite. It is delicious though, and far more than the sum of its parts.

Of course we spent the evening watching Line of Duty


Recipe for the Egg and Pepper Thing

Slice an onion, a red pepper and another colour pepper thinly and fry them in a large frying pan in olive oil, until soft
During this process put in a clove of crushed garlic and a sliced chilli (remove some or all seeds to taste)
Also during this process, but sometime later, add in chopped tomatoes
Keep frying until it is all soft and looks like a ratatouille
Make four spaces in the pan - as if creating a cross with the vegetable mixture.
Into each of the spaces, crack open an egg and drop it in (trying not to break the yolk)
Keep cooking until done
Cover in coriander
Serve with cous cous or whatever.

Mark brought this bottle over as payment for some pond plants. It is called Breakfast Wine, not because it is made of bacon, toast and coffee, or because of the time one is to drink it, but because it is made from fruits associated with breakfast - pineapple, grapefruit, banana. Possibly raspberries and/or blueberries too. It has a lovely pink blush to it and I thought that grapefruit was the prominent taste. In fact, the first taste is bitter and quite a jolt, but quickly a more rounded, pleasant flavour comes through. An interesting bottle.

It was Actively Delicious Tofu in a sweet & sour sauce on Sunday, so Ginger Wine seemed like the right bottle to have. Both food and wine were excellent. The ginger is dominant in this wine, but not overpowering. It is not what one would call a subtle wine.

Earlier in the evening we had shared a bottle of Cava with David & Liz (the excuse being that Liz needed my corker to cork her rhubarb & raspberry wine) and later we watched the final episode of Line of Duty series one. It has been entirely gripping.

This entry is a little out of order. Apologies.
Posted by Ben Hardy at 13:40 No comments: