I have a rule that, unless the flavour is Apple, I do not drink my first bottle from a batch of wine until it is a year old. I have broken this rule for Ginger by three and a half months. It is all because I am a Yorkshire miser. When bottling this wine on Friday, I snapped the string during the corking process. Leaving string in a bottle's neck will ruin the wine. Corks cost about 8 pence each. Therefore, by drinking this wine the next day I saved myself nearly one-tenth of one pound. Result!

The wine itself is everything ginger wine should be: dry, light, gingery.

Pringles and Nectarine Wine make terrible companions. On Wednesday after WYSO I had both together and wondered why the Nectarine Wine tasted quite so bitter. Claire was more positive, saying that for a mid-week bottle, this one was rather good. Then on Friday I drank the wine without the Pringles and the bottle was transformed. It was refreshing and light and tasted of nectarines. Lesson learned: cheap, salty snacks are not a wine's best friend.

Having started Sunday evening with a Cosmopolitan, half a bottle of blackcurrant wine between the two of us was the correct decision. This allowed us to drink the remaining half as one of our Bake Off treats on Tuesday. The other two treats were a bag of Cheesy Wotsits and a chocolate éclair.

The wine continues to be excellent. Blackcurrant in not often smooth, but this vintage is. No jagged edges to make the drinker go "ooh".

Email ThisBlogThis!Share to TwitterShare to FacebookShare to Pinterest
Links to this post
Labels: blackcurrant, cake, cocktails, The Great British Bake Off

On Saturday morning I drew up a list of things that I needed to do. At time of writing, Sunday night, none of them are ticked. Saturday was not the most efficient of days. Certainly it did not involve mowing the lawn, getting holiday money (we are off to Croatia in a fortnight) or buying corks. As a reward for this inactivity I had the lion's share of a bottle of Xmas Tutti Fruti, which is fizzy (not always desirable in a red wine) and rather good. But the end of the bottle I was just that bit too drunk to concentrate on Midsomer Murders so went to bed instead.

I was cross when I opened this bottle. Mostly it was because I was hungry. Claire stayed late at work, arranging for me to collect her at 8:30 p.m.. I ordered a pizza to be ready for 8:50, but Claire wasn't in the car until 8:37. Writing that down, there is no justification for me being cross. Particularly as I hadn't seen Claire since Sunday.

When we got home I basically inhaled both pizza and wine, not really noticing either. My mood improved and we watched 'Bread Week' on The Great British Bake Off 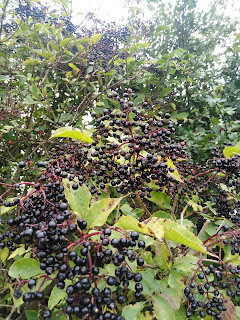 I drove to my usual spot off the A58 on Sunday morning and walked to the farmer's field along Kennel Lane, noting that the few elder trees within the hedgerows had scant fruit. It was a longer walk than I had remembered - it always is. When I got to the field I made sure that the farmer was not around and began collecting elderberries. Whilst the trees were not laden with heavy bunches of dark fruit, they had sufficient for my purposes. 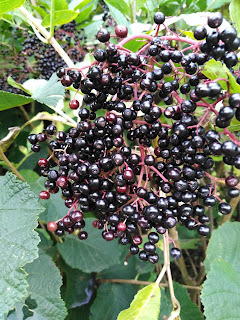 I noticed that many of the berries were smaller than usual and I may have done better leaving this a week. However, I three-quarters filled two plastic bags with elderberries and stalks and judged that this was probably enough.

As ever, stripping the berries was tedious, enlivened by old episodes of The Reunion and Desert Island Discs. It took about two hours and I ended up having picked 5 lbs 12 oz. For a double batch I should really have had 6 lbs, but I judged this Good Enough. What is 4 ounces between friends? 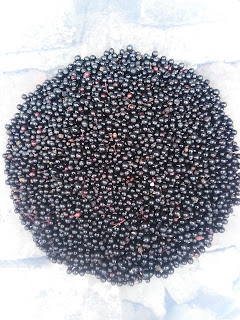 I crushed the berries with a potato masher in my bucket, added 5 lbs 10 oz sugar (I think) and 12 ½ pints of boiling water, stirring all round until the sugar dissolved. A teaspoon each of yeast and pectolase, and two teaspoons of nutrient went in the following morning, 16th September, and by the evening fermentation had begun. 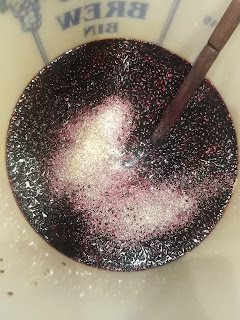 When I remembered to, I gave the bucket a stir over the next few days and then on Friday night I transferred the liquid into its two demijohns. I have started keeping discarded fruit in a plastic bowl when I do this so that right at the end I can press it hard and collect the remaining liquid for topping up purposes. This time I weighed the discarded pulp - it was 2 lbs 8 oz. So, the liquid in each berry makes up just more than half its mass. But it is the liquid which is the important bit and I now have two demijohns full of it. 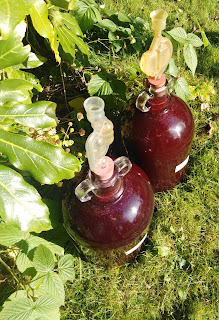 The night that I opened this, Kato brought a dead wren into the house. The night I finished it, he presented me with a dead rat. This is the largest (and bloodiest) kill he has had and, of course, Claire was away. Our division of labour is that I deal with spiders and she removes anything that that cats catch. I had to be very brave on this occasion! Anyway, probably a good job that I had drunk a large glass of relatively poor rose petal wine.

I can't remember why I chose Jasmine Tea Wine as a Thursday night bottle or, indeed, what we did on the night I opened it. I do know, however, that it is an acquired taste which I have yet to acquire. There is something too heavy about it - it cloys on the palate. Mary had a small glass when she came over on Saturday and preferred it to the rose petal wine. Thereafter it sat in the fridge and I drank it during the week that Claire was at a conference learning about flow cytometry. The wine served its purpose, but I can't be any kinder than that.

When I bottled this vintage I was disappointed. It was not the lush blackberry flavour that I had wanted. In the three months since bottling it has improved. Maybe not an all time classic vintage, but this blackberry wine certainly holds its own: it is fruity and exceedingly drinkable. Sunday seemed like the right day to drink it: I had been out picking blackberries in the nearby park for Tutti-Fruti and the day felt like the first day of autumn.

We have a plum glut and Claire had spent the day dealing with part of that. A plum and blackberry crumble was the natural pudding. 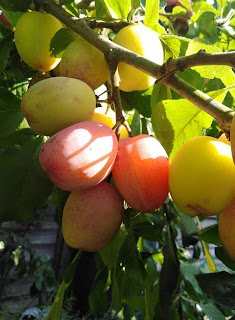 If you want to see how I made this wine, click here.
Posted by Ben Hardy at 08:19 No comments:

I went on my first political demonstration for 45 years on Saturday. The last one was for York Shelter when I was 4 years old. This time it was a protest against the government trying to shut down any opposition to its plans to force through a No-Deal Brexit. Mostly, though, it seemed to be a recruitment drive for the Labour Party, and there was only one good speech (Fabian Hamilton - my MP).

I opened a bottle of Orange Wine in the evening, which we drank with jerk chicken. Unusually for a Saturday we left some. Can't remember why. But that was remedied on Monday.

This elderberry is turning into an excellent vintage. Leaving it two years to mature has done wonders. There is a sweetness and heaviness which work well together.

We drank it on Friday night after I had walked home from Work. It was a pleasant, if non-descript, evening. Claire cleared the freezer of all the bits of ancient bread that had collected and she turned them into a fabulous savoury bread & butter pudding. We finished the night on the sofa curled up, watching Mad Men.

Bank Holiday Monday was a glorious day - it was fabulous weather and I spent much of it in the garden. Only some of that was spent drinking beer. Mostly I was reading a terrific book - The Seven Deaths of Evelyn Hardcastle by Stuart Turton. It has been a long time since I have been quite so gripped by a novel. I must be careful not to gobble it up.

Ginger wine was chosen to go with a braised tofu curry and both were fabulous. Then, on Tuesday - rejoice - Bake Off came back, so one of our treats was to finish the Ginger Wine.

Last year I learnt that sometimes Blackberry Wine is not exclusively to be made in September. I do not plan to make that mistake twice. 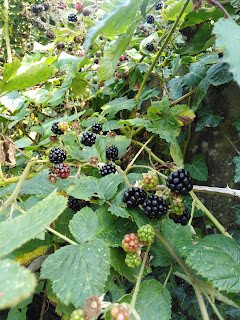 Fruit has generally been early to ripen this year, so Claire and I first visited York Victorian Cemetery to inspect blackberries on Sunday 11 August. Whilst it was clear that blackberry season had only just begun, the berries that were ready were the largest, most luscious blackberries that I have encountered. After only about half an hour's foraging we had more than 3 lbs between us. 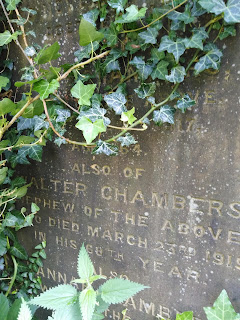 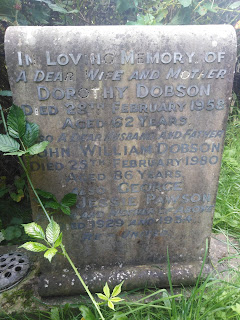 The following Sunday we were in York again, making sure that Pop was alright in Mom's absence now Keith and Jaki had returned up north. He was fine and all three of us went to the cemetery to gather blackberries. This time we got nearly 7 lbs. For a triple batch I need 12 lbs of blackberries, so we went a third time on 25th August, making it a hat-trick of weekends in York - this time the excuse was to see Mom, freshly back from her 60th High School Reunion in Nebraska. It was a hot day and Pop and I went to the cemetery ourselves to finish the job. This was idyllic - the sun beat down and the place was full of birdsong. I had a lovely hour with my father, chatting about this and that, discussing blackberries and getting nettle-stung.

The graves I must mention are (as always) Thomas Douthwaite - though his patch is so overgrown you can no longer see his grave -; Margaret Ann, Corporal W and John Doughty Pratt; Dorothy and John William Dobson; George Carlill (a slater); and Walter & Annabel Chambers. Claire picked from Dorothy Akers, who was only 9 when she died, and possibly Fanny Taylor, the beloved wife of Alfred Watson (solicitor of this town). 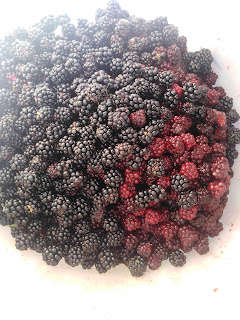 On Monday morning, 26th August, I mashed the blackberries and added 8 lbs sugar and 16 pints of boiling water. This cooled over the (hot and humid) day and I added a teaspoon each of yeast and pectolase, and two teaspoons of nutrient that evening. By Saturday night, 31st August, the liquid was ready for the demijohns. This went without a hitch and I now have three demijohns full of potentially delicious blackberry wine. 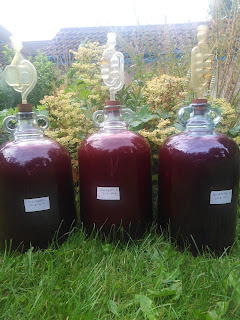 Claire is on new medication which may or may not assist her nasal problems. One of the side effects is that it causes slight dizziness. With this in mind, a glass of rhubarb wine on Friday night was an experiment for her. About half an hour later she went to bed and slept deeply. We repeated the experiment on Sunday night, this time drinking rhubarb wine in the garden after the light had gone, listening to the throb of the West Indian Carnival travelling north from Chapeltown. This time the rhubarb wine did not act quite so much as a sleeping draught, thought Claire did not rise from bed until near 10 on Monday morning. So maybe it did.