This is the best Xmas Tutti Fruti that I have made for several years. It is without the insipidness this flavour sometimes has and there are complex elements to its taste.

I drank half the bottle on Thursday night whilst Claire was out playing Dvorak piano quartets. This coincided with me failing to get flights to Dublin over Easter. I had left it too late and it was all now too expensive. Instead, Sooz will visit us, but I was cross with myself and drinking half a bottle of wine helped.

Claire had the rest of the wine over Friday and Saturday when I was out playing wind octets and in the Leeds Music Club Less-Dreadful-than-Expected Orchestra respectively.

We have cut our holiday short. I had expected to be in north-west Scotland on at least one of these nights. Thanks, though, to Storm Gareth for bringing us home early. Had we not caught the ferry from Coll on Monday morning, we would still be on the island.

I opened this orange wine in compensation for Not Being On Holiday and drank it over two nights. Claire barely had any - she is ill in bed (another reason for coming home early). The wine is a good vintage: light, beautifully clear, with a subtle taste of orange. 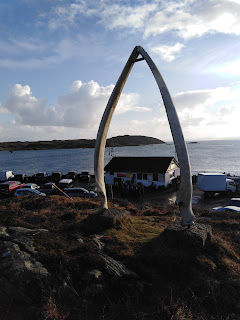 If you want to see how this wine was made, click here
Posted by Ben Hardy at 21:49 No comments:

Now that I have had a month to think about it, I have decided that Claire is right. Claire would argue that a month to consider whether she is correct is ridiculous and exactly a month too long. But she is right - I have been making too much wine and I should scale back production this year. So for the first time in probably fifteen years, I am making a single batch of orange wine. It will become apparent in 2021 whether this is a good idea. 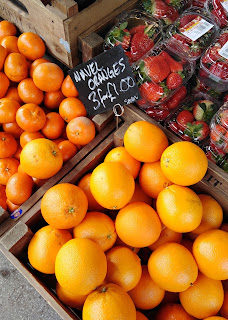 I started the wine on Saturday 2nd March. Recently I have installed a step-counter app on my phone and because this is new and shiny I am walking everywhere. I walked to Chapel Allerton to buy the week's groceries and saw that the Fruit Stall was selling oranges at three for a pound. This is far more expensive than I have bought oranges in the past and I did have an internal debate about whether I should drive to Sainsbury's where they would be five for a pound. But then I reasoned that I was not poverty stricken and could probably afford the extra £1.80 for the ingredients. The oranges added significantly to the weight I carried home, and I had to stop and rest three times on the journey.

Back at home I thinly peeled six of the 12 oranges, getting less successful at avoiding the pith as I went on. I put the peel in a bowl, poured a pint of boiling water over it and covered that with clingfilm.

Next I squeezed all oranges and measured the juice - two and a half pints. These oranges are far larger and juicier than last year's, where I made a double batch with only slightly more juice. It will be interesting to see what this does to the flavour. 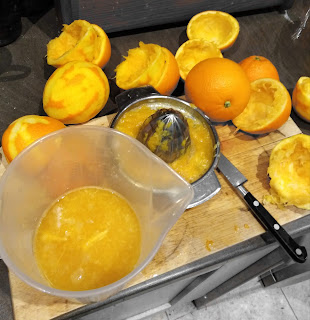 I poured the juice into my bucket and made up the liquid to 6½ pints by putting in 4 pints of cold water. Next I added 2 lbs 12 oz sugar, stirred it all to dissolve this and put in a teaspoon of yeast, nutrient and pectolase. Next day I added the water that had been covering the peel and put the peel itself into our compost bucket. 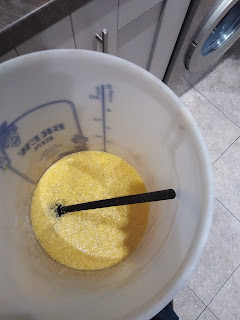 I transferred the liquid into its demijohn on Wednesday evening, 6th March. It was a quick process as there was little to sieve out. I could have used maybe a quarter pint more liquid. The wine is a vibrant orange colour and I look forward to its taste. 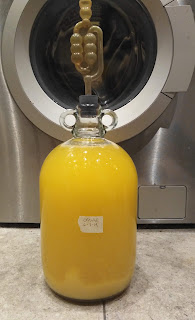 A fabulous bottle of wine. This is smooth and fruity with an excellent blackberry taste. I chose it because we are now on holiday (a 300 mile drive north tomorrow - eek) and this deserves a celebration.

As always before going on holiday, it was a difficult and long day at work as I tried to get everything done. So what better way to mark the occasion than a take-out pizza, an episode of Celebrity Bake Off and a more than decent bottle of home made wine? Now I need to give some serious consideration to packing.

Email ThisBlogThis!Share to TwitterShare to FacebookShare to Pinterest
Links to this post
Labels: Blackberry, holiday, pizza, The Great British Bake Off, work

Claire and I disagree about what age has done to this wine. I think it has been smoothed out, creating something better, less one-note. Claire thinks that the effect is to make it taste less like alcoholic Ribena, which is a Bad Thing. That didn't stop us sharing the bottle equally, however.

It was an ordinary Friday night in which we ate quiche made from the Sick and the Weak and watched Mad Men on DVD. In the words of Albert and the Lion, Nothing to laugh at, at all.

There is a slight fizz and a distinct nectarine taste to this wine. It is dry yet fruity and I am pleased with it - to the extent that I may make it again one day. Claire thinks it is a mid-week bottle, which is what this was, but I am not so sure. The circumstances in which we have drunk this have been entirely unremarkable - listening to The Archers, eating a tomato, bean & chorizo dish and chatting to my father.

Email ThisBlogThis!Share to TwitterShare to FacebookShare to Pinterest
Links to this post
Labels: Claire, food, Nectarine, Pop, The Archers

Over the last week I have been seduced. Claire is entirely happy with this, for she has been seduced too. We have both fallen for a step-counter. The psychology of it is so obvious that I am cross that I find it attractive. But I have an impetus to go for a walk at lunchtimes rather than sit at my desk, reading the Guardian on-line.

On Friday, after having this pace counter for a week, I got over 18,000 steps and rewarded myself with a bottle of rhubarb wine. This was drunk with a take-out Chinese (which we both walked to collect, getting 2,000 steps or so). It has been an age since we had Chinese food, and I think it is the prawn crackers that I like the most. I had far more of the bottle than Claire, but I had done eighteen thousand steps. Have I mentioned that already?